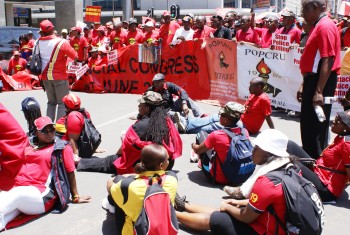 The latest figures show unemployment up at 26,7%, but the worst is yet to come. SA could lose a further 400,000 jobs next year according to one estimate, as reported in Moneyweb. This spells trouble for the ruling party heading into the local elections later this year, and the opposition will make sport of these figures to boost their electoral chances.

Labour statistics released by StatsSA on Monday revealed that unemployment in South Africa had climbed to its highest levels since the global financial crisis of 2008, to 26.7%. But many economists believe this is only the beginning of a catastrophic jobs decline.

Loane Sharp, director of economic analysis at Prophet Analytics, says that, according to his economic model, the South African economy is going contract by 1.1%, shedding 285 000 jobs in 2016. And, if the global economy remains as sluggish as it is now, we will lose a further 400 000 jobs in 2017.

Unemployment increased by 2.2 percentage points to 24.5% in the fourth quarter of 2015. But, with the mining and manufacturing sector struggling, increasingly having to retrench workers and replace them with machinery that allows them to be more efficient, one cannot help thinking that job opportunities and job security are bound to worsen.

Incidentally, Prophet Analytics is a company that helps companies become more efficient by reducing their headcount.

“We’ve just done a big cost-saving initiative for a large JSE company, saving them R135 million annually without a single retrenchment of an entry-level employee,” says Sharp, adding that they frequently suggest management cuts because management-level employees are often overpaid and under-skilled.

“In fact, more and more, my attitude about trade unions is that trade unions get involved when management is weak. They give employees a reason to bring in trade unions. No trade union was ever brought in where the workforce was largely happy.”

About a year ago, Chris Hart, who is now the financial market strategist at Leapfrog Global, used some strong words to describe South Africa’s unemployment crisis, saying the country was on the cusp of ‘a jobs holocaust’. Given recent data, it appears his utterances had at least some truth to them, if not so politically correct.

“I got into some trouble for using that particular language last year,” says Hart, adding that the message he wanted to get across at the time was that the social tension that would arise from extreme joblessness would lead to unrest and violence, exacerbating the unemployment problem and creating a vicious cycle.

Says Hart: There are three dimensions to this unemployment problem. First is that a lot of people entering the job market are facing huge difficulties, and the people that already have jobs are also struggling, just to keep up with their standard of living given the inflation that we have had. And there is no job security for them either. The third element is social tension. Xenophobic violence is an example of how those frustrations can manifest.”

Chief economist at Economists Dotcoza, Mike Schüssler, agrees, saying that when he speaks to portfolio management analysts, both locally and abroad, he gets a sense that they are paying more attention to the impact of protests and political instability than before and that this has implications for investor confidence. He believes that, while it is impossible to predict what will happen in the future, unemployment is far likelier to worsen than it is to improve.

“The last time the world went into a recession, the stats we got – before the quarterly labour force survey was revised – showed that we lost more than a million jobs,” says Schüssler. “Now it looks like we have lost about 700 000 jobs, using the broader definition of unemployment, which includes discouraged people.”