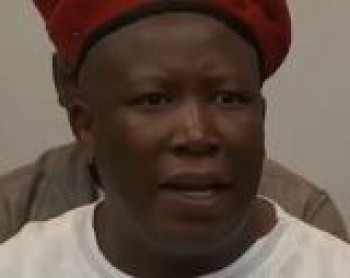 Economic Freedom Fighter leader Julius Malema leads an increasingly schizophrenic life, applauding the Constitutional Court when it rules against President Zuma in using public funds to build his Nkandla private residence, but trashing the Constitution in the next breath by threatening to remove the government through force if necessary. One of the drafters of the Constitution, George Devenish, looks at the implications in Business Day.


The police have confirmed that they are investigating Economic Freedom Fighters (EFF) leader Julius Malema for declaring, on the Al Jazeera television network, that he would remove the government "through the barrel of a gun" if necessary.

This follows the laying of a charge of high treason by the African National Congress (ANC) against him for this statement, in which in effect he declared that he would take up arms against the government if needs be.

High treason is the most serious of all crimes, and according to a police definition it consists of any conduct committed by a person owing allegiance to the state with the intention of overthrowing the government; coercing the government by violence into any action or inaction; violating, threatening or endangering the existence, independence or security of the republic; or changing the constitutional structure of the republic.

High treason is a widely defined common law crime that has its origin in the British legal system, which we have adopted. Mr Malema’s actual words in the Al Jazeera interview were that his party would remove the ANC "through the barrel of a gun". He also declared that "(President Jacob) Zuma is not going to intimidate us. We are not scared of the army, we are not scared to fight. We will fight — yes, literally we will fight."

The ANC, Democratic Alliance (DA), Congress of the People and United Democratic Movement have all condemned the EFF leader’s war talk. The DA also accused Mr Malema of inciting violence with his comments.

In the Boeremag trial, Judge Eben Jordaan rejected the argument on behalf of the accused that the common law crime of high treason was so wide that it violated several rights guaranteed by the Constitution. In SA’s traumatic and tragic history there have been many prosecutions for high treason and related issues such as sedition and sabotage, the most notorious being those of the Treason Trial of 1957 and the Rivonia Trial of 1964, involving former president Nelson Mandela and other ANC activists.

Although prima facie Mr Malema’s statement that his party would remove the ANC government "through the barrel of a gun" would appear to fall within the ambit of the definition of high treason as set out above, the state has the discretion to prosecute or not to prosecute in relation to conduct falling within the ambit of the definition of criminal conduct of any kind, including high treason. This depends on variety of considerations, both legal and political. What is clear is that this incident forms part of a pattern of conduct of a fascist nature by the EFF, involving disruptive behaviour in Parliament since August 2014, when its members disrupted Mr Zuma when he was answering questions in the National Assembly.

What is categorically clear is that because SA is a constitutional state, premised on the rule of law, threats of violence by political leaders are unacceptable and in manifest conflict with the letter and spirit of the Constitution and its values. Furthermore, it appears that Mr Malema has violated his code of conduct as an MP by his belligerent statement and is therefore answerable to Parliament, which is duty-bound to investigate and take any necessary punitive action. Mr Malema’s conduct in general is also manifestly inconsistent in that he championed the cause of constitutionalism in relation to the Constitutional Court’s judgment in the Nkandla case, but implicitly rejects this philosophy with his "barrel of the gun" statement in the Al Jazeera interview.

In the robust political discourse in the run-up to the election in August, it is imperative that violence be eschewed. We are a constitutional democracy and the conduct of all role-players must be based on a basic discipline to pursue our political actions and utterances in a peaceful and lawful manner. Mr Malema and his party appear to reject any such discipline. This poses a serious problem that must be handled firmly, but correctly. This is a challenge to our constitutional dispensation since it is submitted that freedom of political expression, however important, cannot be used to subvert the foundations on which the constitutional state is built.

Although the EFF and its members are entitled to the rights as set out in the Bill of Rights, when it or its leader abuses the freedom accorded to it in the Constitution, it must be called to account in no uncertain terms. Liberty is not licence, and the cost of liberty is "eternal vigilance". South Africans, having crafted and adopted an exemplary Constitution at inordinately great cost, cannot permit its values and substance to be subverted by the predations of those in the body politic who unscrupulously desire to use violence or a threat of such violence to advance any political agenda.