Zuma's exit plan is unravelling before his eyes 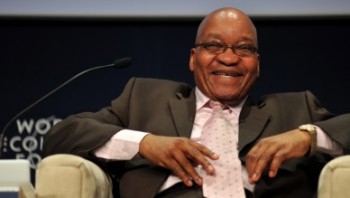 President Zuma could leave office with a salary of R2,8m a year for life, but he was gambling on something much bigger, writes Peter Bruce at Business Day. His plan involved the Gupta family and the successful conclusion of two business deals - the financing of the Russian nuclear reactors and the Guptas' purchase of the Optimum coal operation. Both are now in trouble.

As former and current senior members of the African National Congress (ANC) plot to get rid of him, President Jacob Zuma has some quick calculating to do. Does he negotiate an exit that allows him to resign and thus hold on to his R2.8m annual salary for life, plus staff and security? Or does he hold on for dear life and chase the prize he has slowly been building around his family’s business ties with the Gupta family?

Thabo Mbeki chose wisely when he was pushed out by the ANC in 2008. He resigned gracefully with his benefits intact and he has been able with those resources to carve out an intellectually and politically stimulating retirement for himself. Zuma would find the Mbeki option much more challenging. He is not widely admired as a statesman and he has a large family to support. His instinct, right until the last possible moment, will be to stick with the Gupta option.

That option is complex and treacherous, partly because the building blocks that might make it viable are not yet all in place. He needs two basic things to happen. First, the nuclear power build programme he is proposing must come to fruition, with the Russians as the primary suppliers.

And, second, the Guptas must find affordable financing to complete their R2.1bn acquisition of the Optimum coal mine from Glencore. Optimum is tied to a large Eskom power station in Mpumalanga.

Much hard work to both these ends is already in place, but they face near insurmountable setbacks. Zuma’s attempt last December to appoint a malleable finance minister willing to finance the nuclear programme failed, and he now sits with one, Pravin Gordhan, who will not spend or promise money that he does not have for the build. Worse, he is unable to insert a flexible deputy into the Treasury now that it is clear the Guptas secretly offered Deputy Finance Minister Mcebisi Jonas the job of finance minister before Nhlanhla Nene was fired.

On the other side of the equation, the Guptas are in real trouble. Abandoned by some of their local bankers, their primary auditors and their stock exchange sponsor in the wake of evidence that they interfered in ministerial appointments, finding the necessary R2.1bn has suddenly become a real struggle. They have become almost unbankable in SA, certainly for that kind of money. Zuma is hanging by a thread, but without him, the Guptas will lose their ability to shape their financial playing field to their liking completely.

It is vital to both families that Optimum is bought and its creditors paid. Zuma’s son Duduzane has recently become a major shareholder in the controlling structure of the Guptas’ Shiva uranium operation, into which Optimum is ultimately to be merged. It is this position that binds the Zumas and the Guptas in an embrace that threatens to destroy them both. Or to make both fabulously wealthy.

One way would be for Shiva to negotiate long-term uranium supply to the enrichment part of the nuclear deal Zuma has designed, while signing a 20-year coal contract with Eskom through the agency of proxy directors on the Eskom board and contest, if that is the right word, through their construction company for the expensive civil work around the new reactors. Or, on winning the nuclear contract, the Gupta/Zuma assets would be bought outright by the Russians.

The Guptas are unlike any of Zuma’s other cronies. They are shrewd, dynamic and ambitious. But they crassly overplayed their hand in 2013, when they used the Waterkloof airforce base to land guests for a wedding. Suborning Cabinet ministers has merely been the cherry on the cake. And Zuma’s neglectful behaviour over Nkandla has now made it extremely difficult for him to rescue them.

Those ministers still clearing the way for Zuma — Nathi Nhleko, David Mahlobo and Tina Joemat-Pettersson — will see none of the money the Zuma family is chasing and will lose their jobs when he goes. Thanks to a Business Day report last week from Carol Paton, we know the original nuclear deal announced with the Russians in 2014 was supposed to be binding.

That was the plan from the start, all done and dusted. But it has come apart just as, I suspect, the relationship between the Zumas and the Guptas soon will.