The fall-out from Zupta scandal is just beginning 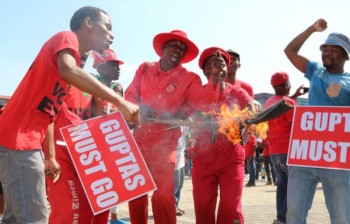 The ANC has made a strategic blunder in throwing its support behind their crippled leader, Jacob Zuma, writes Allister Sparks in Business Day. That will come back to haunt the party. But we are slowly learning how a compromised cabinet, packed with Zuma toadies, were all set to green light the building of several Russian-made nuclear reactors, and how the Guptas and Zumas were going to make a killing. Former finance minister Nhlanhla Nene blocked the deal and was fired. Here's how it went down.

Strange, isn’t it, how one bad error of judgment can quickly cascade into a sea of troubles. In my last column, I argued that the African National Congress’s (ANC’s) decision to stand by President Jacob Zuma in the face of the damning Constitutional Court judgment on the Nkandla affair was a strategic blunder that would surely have serious consequences.

By doing so, I said, the ANC as an institution was in effect aligning itself with behaviour that the Constitutional Court had declared to be in violation of the Constitution. Already, there is a powerful backlash within the party over this, with major party figures including its most revered stalwarts, calling for Zuma’s resignation.

But as I noted, all this related to only one scandal; there were more still smouldering, such as the arms deal, the spy tapes and the president’s relationship with the Gupta family, that could throw up more embarrassing evidence involving him.

Now, within days, we have the Gupta issue blowing up in the ANC’s face. As I write this, it is still not clear why the Guptas have flown to Dubai. Have they skipped this country because of problems with their business, Oakbay Resources and Energy?

We don’t know, but rest assured the facts of what prompted their flight will emerge soon enough — and the ANC may find itself in a worse plight than ever.

Events have moved rapidly on this front. Last week, all four of SA’s big banks closed Oakbay’s accounts, KPMG announced it would no longer audit the company’s books, and the family’s stock exchange sponsor abandoned them.

This was followed by Atul and Varun Gupta resigning their directorships of Oakbay, and Duduzane Zuma, the president’s son, from his nonexecutive chairmanship of Shiva Uranium, an Oakbay subsidiary.

There is something fishy going on here. The critical thing is that Oakbay, and particularly Shiva, a uranium mine in the North West, is central to Zuma’s eagerness to do a deal with Russia to build and operate a series of nuclear plants capable of providing Eskom with 9,600MW of electricity.

It is a deal that would make both the Guptas and the Zuma family a fortune, since Duduzane Zuma owns a sizeable slice of Shiva’s shares.

But it is a deal two finance ministers, Pravin Gordhan and Nhlanhla Nene, have blocked because they deemed it unaffordable. That is why Zuma shunted them aside and tried to install Des van Rooyen, a cohort of the Guptas, as head of the Treasury.

Fortunately, when this caused the rand to nosedive, the "top six" of the ANC’s national executive intervened to force Zuma to bring Gordhan back — and he continues to block the Russian deal.

Now, the Guptas have gone. Whether they will return is hard to say. But I have a suspicion they wanted to escape the fallout from what could be the Vesuvius of all Zupta eruptions. The story of the Gupta family’s involvement with uranium mining in SA has been compiled in some detail by a researcher named Lily Gosam, who I don’t know, but whose detailed work, which I found on the Rand Daily Mail website, has helped fill in many gaps in my own understanding of its importance to these unfolding events.

The story goes back to 2010 when Oakbay bought Shiva Uranium, then a struggling operation, for a knock-down price of R250m — about 14% of its reported value at the time. There were claims that Zuma intervened to persuade the Industrial Development Corporation (IDC) to lend Oakbay the money after the more natural state institution to help with such a deal, the Public Investment Corporation, turned it down as a bad buy.

But at that price, it was a snip if things had gone the right way for the Zuptas. The deal included a number of black economic empowerment partners, among them the ANC’s MK Veterans Association, its Women’s League and a group called Mabengela Investments, of which Duduzane Zuma owned 45%.

The question is, why was the Gupta family so keen to get into the uranium mining business, which was in the doldrums at that time? Well, it turns out that Eskom, in the course of planning to expand its electricity output to meet SA’s future needs, drew up a plan to build 12 nuclear power stations. But the global economic crisis of 2008 caused the Treasury to reject this massively expensive project as unaffordable.

However, Zuma, on a 2010 visit to Russia with a contingent of ministers and businessmen in tow, met with the then Russian president, Dmitri Medvedev, who introduced him to Russia’s State Atomic Energy Corporation, Rosatom.

This is a huge organisation, the biggest of its kind in the world, which not only supplies electricity to the whole Russian federation, but is currently building seven nuclear power plants at home and 34 abroad.

Zuma was apparently impressed by what he heard about Rosatom, and in several subsequent visits to Moscow, appears to have formed a bond with President Vladimir Putin, who succeeded Medvedev. These meetings reportedly led to the signing of two agreements for Rosatom to build six to eight nuclear plants in SA, capable of generating 9,600MW of electricity. But details of these agreements, if they have indeed been signed, have not been disclosed publicly or subjected to parliamentary scrutiny as required by law.

The cost is the killer. This has been estimated at between R800bn and R1.6-trillion — excluding the cost of delays, inflated prices, rand depreciation and a range of other costs relating to nuclear-fuel enrichment and waste disposal. This is why both Gordhan and Nene dug in their heels, insisting the project was unaffordable.

Zuma’s response in both instances was to dismiss them. Gordhan was shunted off to a lesser portfolio and replaced by Nene, who then suffered the same treatment on the night that has become known as our 9/12.

It is interesting to note that a few hours before firing Nene on that critical night, Zuma had persuaded the Cabinet to approve the 9,600MW deal — in itself an illustration of how he has packed his administration with toadies. He must have been furious when Nene refused to okay it, thus obstructing his grand plan.

That plan explains why the Zuma-Gupta alliance was so keen to get into the uranium mining business. Nuclear power stations require enriched uranium to operate and, with advance knowledge of the president’s intentions (Duduzane surely told his partners what daddy was up to), the Guptas stood to make a killing.

They had picked up the Shiva Uranium mine for a song, but once those hungry Rosatom plants were up and running, or even when it was a done deal that Rosatom was on its way to build them, Oakbay’s shares would have gone through the roof and stayed there for years — to the massive enrichment of the Guptas, Duduzane and, no doubt, daddy Jacob as well.