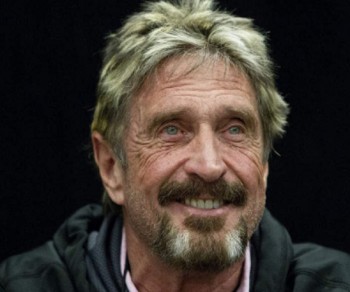 Several South Africans were fingered in the so-called Panama Papers expose which detailed how "the rich and powerful hide their money in off-shore tax shelters". Among them were Zimplats, Fidentia and President Zuma's nephew, Khulubuse Zuma. But as Moonofalabama.org points out, this selective leak is a classic blackmail tactic against enemies of the US empire.

The leak of the so-called Panama Papers by the International Consortium of Investigative Journalists (ICIJ) has captured headlines for close on a week as we learned how the rich and the celebrated hide their money in off-shore tax shelters.

There is plenty here to twitter about, not least the appearance of a few names familiar to South Africans, among them President Zuma's nephew, Khulubuse Zuma, who, we are told, enjoyed a life of cigars and owned 19 collectible cars. Zuma allegedly had an association with a company, Caprikat, based in the British Virgin Islands, that landed a R100bn oil deal in the Democratic Republic of Congo. Then we find out that Zimplats (part of Implats) used an offshore company, HR Consultancy, to pay employees in Zimbabwe. This has been denied by the company. The scandal-plagued finance company Fidentia also appears on the Papers for allegedly setting up off-shore companies.

Is there anything wrong with this? Well, we're not sure at this point, other than anyone with an offshore account must be guilty of being wealthy. Finance minister Pravin Gordhan has promised to investigate whether any laws were broken. While the mainstream finger-wagging went into over-drive, a much bigger story slipped under their noses. To get the real scoop on this, one has to turn to those with an inside track in the intelligence community, such as Moonofalabama and former UK ambassador, Craig Murray. It's now clear that just a tiny portion of the 11m documents were leaked, and these attempt to incriminate Russian president Vladimir Putin (not directly, but by association), football association Fifa, and other familiar enemies of the US empire. Not a single noteworthy American appears on the list, as noted by John McAfee (pictured above left), founder of the McAfee security software company and Libertarian Party candidate for the upcoming US presidential election.

McAfee suggests the mainstream has been played for fools by Western intelligence agencies, or were willing participants in the "limited hangout". Putin is a stock target for US foreign policy wonks because he will not surrender Crimea and has just spent the last few months pulverising ISIS in Syria, to the embarrasment of the US military which has been shamed by Russia's efficiency in fighting terrorism. Fifa? Well, we're not quite sure why this body has a target on its back, but it does. The family of Syrian president Bashar Al-Assad also appears on the list. No surprise there. The empire has been trying to ditch him for four years.

Writing in Business Insider, McAfee points out that the Panama Papers contain 11,5 million documents chronicling the formation and actions of 214,000 offshore companies along with the names and manipulations of more than 14,000 clients. Among the clients are:

Implicated as well are dozens of major banks that worked with Mossack Fonseca, the law firm whose data was hacked, in establishing these offshore entities. Mossack Fonseca is the fourth-largest "asset protection" law firm in the world. Among its banking clients are Credit Suisse, UBS, Landesbank, and Rothschild. This leak, says McAfee, is the largest and most damaging cyberattack on record. The information is damning, but it shows how vulnerable companies, law firms and individuals are to cyber-attack. Elsewhere, McAfee says this is the logical outcome of the US government's assault on privacy.

Moonofalabama explains what has been going on behind the scenes, and suggests the mainstream media (all pro-establishment) has once again offered itself up as a willing servant of western intelligence agencies. Let's take a closer look at who funds the "investigative journalists" behind the leaks and, more importantly, who and what was omitted in this selective leak.

"A real leak of data from a law firm in Panama would be very interesting. Many rich people and/or politicians hide money in shell companies that such firms in Panama provide. But the current heavily promoted "leak" of such data to several NATO supporting news organization and a US government financed "Non Government Organization" is just a lame attempt to smear some people the U.S. empire dislikes. It also creates a huge blackmail opportunity by NOT publishing certain data in return for this or that desired favour."

Already some 16 months ago, Ken Silverstein reported for Vice on a big shady shell company provider, Mossak Fonseca, in Panama. (Pierre Omidyar's Intercept, for which Silverstein was then working, refused to publish the piece.) Yves Smith published several big stories about the Mossak Fonseca money laundering business. Silverstein also repeated the well known fact that Rami Makhlouf, a rich cousin of the Syrian president Assad, had some money hidden in Mossak Fonseca shell companies. He explains:

To conduct business, shell companies like Drex need a registered agent, sometimes an attorney, who files the required incorporation papers and whose office usually serves as the shell's address. This process creates a layer between the shell and its owner, especially if the dummy company is filed in a secrecy haven where ownership information is guarded behind an impenetrable wall of laws and regulations. In Makhlouf's case—and, I discovered, in the case of various other crooked businessmen and international gangsters—the organization that helped incorporate his shell company and shield it from international scrutiny was a law firm called Mossack Fonseca, which had served as Drex's registered agent from July 4, 2000, to late 2011.

A year ago someone provided tons of data from Mossak Fonseca to a German newpaper, the Sueddeutsche Zeitung. The Munich daily is politically on the center right and staunchly pro NATO. It cooperates with the Guardian, the BBC, Le Monde, the International Consortium of Investigative Journalists and some other news organization who are all known supporters of the establishment.

The Sueddeutsche claims that the "leaked" data is about some 214,000 shell companies and 14,000 Mossak Fonseca clients. There is surely a lot of hidden dirt in there. How many US senators are involved in such companies? Which European Union politicians? What are the big Wall Street banks and hedge funds hiding in Panama? Oh, sorry. The Sueddeutsche and its partners will not answer those questions. Here is how they "analysed" the data:

The journalists compiled lists of important politicians, international criminals, and well-known professional athletes, among others. The digital processing made it possible to then search the leak for the names on these lists. The "party donations scandal" list contained 130 names, and the UN sanctions list more than 600. In just a few minutes, the powerful search algorithm compared the lists with the 11.5 million documents.

For each name found, a detailed research process was initiated that posed the following questions: what is this person’s role in the network of companies? Where does the money come from? Where is it going? Is this structure legal?

Essentially the Sueddeutsche compiled a list of known criminals and people and organizations the U.S. dislikes and cross checked them with the "leaked" database. Selected hits were then further evaluated. The outcome are stories like the annual attempt to smear the Russian president Putin, who is not even mentioned in the Mossak Fonseca data, accusations against various people of the soccer association FIFA, much disliked by the US, and a few mentions of other miscreants of minor relevancy.

There is no story about any US person, none at all, nor about any important NATO politician. The highest political "casualty" so far is the irrelevant Prime Minister of Iceland Sigmundur David Gunnlaugsson who, together with his wife, owned one of the shell companies. There is no evidence that the ownership or the money held by that company were illegal.

So where is the beef?

As former UK ambassador Craig Murray writes, the beef (if there is any at all) is in what is hidden by the organisations that manage the "leak":

The filtering of this Mossack Fonseca information by the corporate media follows a direct western governmental agenda. There is no mention at all of use of Mossack Fonseca by massive western corporations or western billionaires – the main customers. And the Guardian is quick to reassure that “much of the leaked material will remain private.”

What do you expect? The leak is being managed by the grandly but laughably named “International Consortium of Investigative Journalists”, which is funded and organised entirely by the USA’s Center for Public Integrity. Their funders include:

The International Consortium of Investigative Journalists (ICIJ) is part of the Organized Crime and Corruption Reporting Project (OCCRP) which is financed by the U.S. government through USAID.

The "leak" is of data selected by US friendly organisation out of a database, likely obtained by US secret services, which can be assumed to include much dirt about "western" persons and organisations.

To only publish very selected data from the "leaked" data has two purposes:

The engineered "leak" of the "Panama Papers" is a limited hangout designed to incriminate a few people and organisations the US dislikes. It is also a demonstration of the "torture tools" to the people who did business with Mossak Fonseca but have not (yet) been published about. They are now in the hands of those who control the database. They will have to do as demanded or else ...