The banks' business model is foreclosing on homeowners 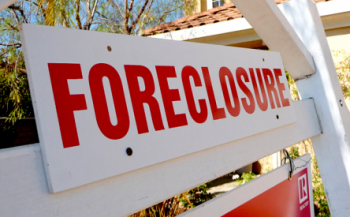 A recent analysis by the Wall Street Journal reveals that precious little of the $110 billion in damages awarded against banks for mortgage fraud and irregularities did not go to the 6m American homeowners who lost their properties. Most of it went to the Treasury, according to the Fiscal Times.

You wouldn’t think that anyone could look at the calamity of the foreclosure crisis, where fraudulent mortgage origination, fraudulent securitizations, fraudulent loan servicing and fraudulent evictions combined to dispossess 6 million Americans from their homes, and see it as a money-making opportunity. Well, nobody except for perhaps Donald Trump. But a news investigation into the aftermath of the crisis shows that the U.S. government did turn a profit on after-the-fact enforcement of these interlocking frauds, without distributing those profits to the homeowner victims. We can add a clause to the famed Occupy Wall Street chant: Banks got bailed out, we got sold out and the government made a killing.

The facts come from a Wall Street Journal analysis of $110 billion in proceeds from over 30 mortgage-related settlements secured by the Justice Department, federal agencies and state Attorneys General.

Let’s set aside my favorite bubble on that chart, “unknown.” The $1.2 billion in that category gets treated as pocket change lost under the couch cushions. But the rest of the story is even more bizarre and dismal.

The article makes clear that the chart is somewhat misleading. All of the $34 billion recovered by mortgage giants Fannie Mae and Freddie Mac for being sold fraudulent mortgage securities gets swept into the U.S. Treasury, by law. Some of the federal agencies receiving settlement funds also send those to the Treasury. So in fact, the biggest bubble should be the government’s general fund, with nearly $49 billion in proceeds from the settlements.

As far as I know, the Treasury Building was never at risk of foreclosure over the past eight years, and its inhabitants never had to worry about being thrown onto the street with all their possessions. Yet they received the biggest reward from miscreant banks who defrauded homeowners and investors.

We can be charitable and say that housing programs administered through the Troubled Asset Relief Program (TARP), aka the bank bailout, came from this general fund. So in a roundabout way, you can surmise that the $49 billion that came in from the banks went out through the Home Affordable Modification Program (HAMP) and other vehicles. However, the numbers don’t add up. According to the latest report of the Special Inspector General for TARP (see page 84), the government has only expended $19 billion on TARP housing programs as of the end of last year. There’s another $18.5 billion available to be spent, but even if that eventually gets used, the government will have turned a tidy $12 billion profit on mortgage-related fraud, and potentially as much as $30 billion.

There are hedge funds in America that would relish those returns!

The Justice Department also collected “at least $447 million,” according to the report, despite their office building not being under threat of foreclosure either. States received $5.3 billion, but had no obligation to deliver any of that to housing-related programs. In fact, well over half of the $2.5 billion given to states in the 2012 National Mortgage Settlement went to plug budget holes. And the Journal article finds that bank-settlement money built horse stables in New York and funded email accounts in Delaware.

As for that $45 billion bubble of “consumer relief,” this is where the chart is perhaps at most variance with the facts. These were not hard dollars, but credits given to banks for performing certain activities. Many of those activities had nothing to do with rescuing borrowers from foreclosure. Banks got credit for bulldozing homes, donating homes to charity and giving homeowners small amounts of move-out money — routine things banks do anyway for public relations purposes.

Nearly one-quarter of the “relief” in the National Mortgage Settlement came from short sales, in which the bank forgives the difference between the price a distressed homeowner can fetch for their home and the amount they owe on the mortgage. Short sales can be beneficial, but they result in the homeowner losing the home. More people lost their homes in these settlements than saved them.

Even the “relief” that allegedly went to homeowners doesn’t tell the whole story. Banks could get credit by “extinguishing” long-delinquent second mortgages whose real value was $0, since there was no chance of repayment. Banks got credit in the Independent Foreclosure Review settlement administered by the Federal Reserve for the total amount of the mortgage they modified. In other words, if they reduced the principal on a $500,000 mortgage by $1, they got credit for $500,000 of “consumer relief.” That distortion is included in this calculation. Far fewer homeowners benefited from these settlements that it would appear at first glance.

It should also be emphasized that the top-line number of $110 billion in “penalties” doesn’t resemble what the banks actually had to pay. Most of the settlements were tax-deductible, reducing the total value by billions of dollars. Banks reduced principal balances on loans they only serviced and didn’t own, paying their fines with other people’s money. They could get HAMP incentive payments for loans they modified as part of the settlements. Banks even got credit in some settlements for issuing loans in low-income communities, a money-making activity (I’ve referred to this as akin to a bank robber being sentenced to open a lemonade stand).

I have previously estimated that the $36.65 billion top-line number in settlements over faulty securitizations with JPMorgan Chase, Citigroup and Bank of America amounts to $11.49 billion when you do the actual math. And none of that money comes from the pockets of executives. It comes from shareholders in these corporations; the guys in the C-suites keep their bonuses.

They also stay far away from any jail cell. At the root, we’re talking about cash settlements for a litany of crimes, including the largest consumer fraud in American history. The parties that suffered the greatest harm — homeowners and investors — were not the main beneficiaries and in fact received little. And the parties that actually committed the crimes, bank executives, never had to take responsibility for them, either through the loss of their wealth or their liberty.

Worst of all, the federal government, instead of upholding its duty to enforce the law, took billions in profits from bank shareholders. We’ve seen major corporate settlements employed broadly instead of to directly help victims — think of the tobacco settlement. What’s new here is turning an unprecedented crime ring of systemic fraud into a government piggy bank.

It’s perhaps one reason why voters are so mad this election cycle — they recognize that there is one set of rules for powerful elites and one for the rest of us. So they flock to whoever can peddle an anti-establishment message. The public intuitively sensed this inequity. Now we have the actual numbers.