President Zuma's state of the nation address was aimed at becalming a troubled country, but it may not be enough to avoid the inevitable ratings downgrade and electoral thumping the ruling party is likely to receive later this year. Analysts were less than enthusiastic about Zuma's message, according to the Mail & Guardian. 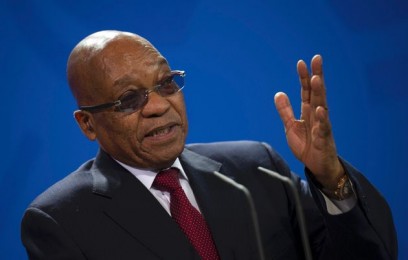 The 2016 State of the Nation address (Sona) had a few bright spots, but it is unlikely enough to restore confidence in South Africa and convince ratings agencies not to downgrade the country’s credit rating.

It will be left to Pravin Gordhan’s budget speech to provide the nuts and bolts of how the country can avoid this fate but already some analysts believe it has failed to show any meaningful change in policy direction.

Jacob Zuma’s speech began with the outcry from opposition MPs who interrupted him repeatedly, and ultimately saw the Economic Freedom Fighters and the Congress of the People ejected from the National Assembly.

But beyond this it did contain some concessions on hotly debated issues and promised more curbs on government spending.

Zuma, for the first time, emphasised the importance of the affordability of nuclear energy, which has so far remained a deeply controversial legacy project for his administration. Although nuclear procurement remained a part of future energy plans, it would be only be done on “a scale and pace that our country can afford”, he said.

He also promised additional cuts to perks that government officials get. This news will be particularly welcomed.

Zuma said: “Overseas trips will be curtailed and those requesting permission will have to motivate strongly and prove the benefit to the country.”

The size of delegations will also be greatly reduced and standardised he said, adding that  further restrictions on conferences, catering, entertainment and social functions will also begin.

Departmental budget vote dinners will be done away with and more cuts can be expected in the budget later this month Zuma said.

The fact that more have had to be implemented is, however, arguably a sign that, so far, government has failed to successfully reign in its profligacy.

Perhaps less welcome will be the proposal to do away with maintaining the two capitals, namely its administrative capital in Pretoria and its legislative one, Parliament in Cape Town. Zuma pleaded with Parliament to consider this and the cost involved in maintaining both and ferrying officials between the two.

This idea has been debated within government over many years, but has gone nowhere in the past, notably due to questions over the cost involved in replicating the existing parliamentary infrastructure, such as the three parliamentary villages for MPs, in Pretoria.

In reiterating a nine-point plan to boost growth, which appeared in his 2015 Sona, Zuma emphasised plans to overhaul state-owned enterprises (SOEs) so that they are properly governed and managed. This includes the “immediate rationalisation” of those SOEs with overlapping mandates, he said.

He promised that an inter-ministerial committee, led by deputy president Cyril Ramaphosa, will ensure the implementation of the recommendations of the Presidential Review Commission on State Owned Enterprises.

But it should be noted that despite the commission’s report being released in 2013, progress has been slow when it comes to actually delivering on its recommendations.

Zuma addressed the topic of the introduction of a minimum wage – currently being discussed at Nedlac. But he said: “It is important to emphasise that the national minimum wage should be implemented in a manner that does not undermine employment creation, the thriving of small businesses or sustained economic growth.”

This cautionary statement echoes some of the major concerns that business has had with the call for a national minimum wage and is bound to raise eyebrows among the ANC’s alliance partners such as Cosatu.

And although Zuma made direct overtures to business through promises such as the introduction of a “One Stop Shop/Invest SA initiative”, in partnership with the private sector, other announcements may cause concern among this fraternity.

It remains to be seen how the pharmaceutical industry will welcome the announcement of a state-owned firm that will participate in the “supply of anti-retroviral drugs to the department of health” from next year.

Equally, proposals announced last year, to prevent foreigners buying land and to place a 12 000 hectare cap on land will go ahead despite vociferous criticism from both civil society and organised agriculture – along with threats to challenge the policy in court.

Analysts believe the speech was weighed down by a sense of “business as usual”.

“The key for us was the total lack of any new way of thinking in wider government policy to boost growth,” said Peter Attard Montalto, senior emerging market strategist for investment group Nomura. He said the speech would be negative for the currency and local assets, and it did not change Nomura’s view that a ratings downgrade may still happen in the coming 18 months.

“There were no shock-and-awe moments to show decisiveness, no pulling of rabbits out of a hat to show a different way of thinking, and no recognition that business as usual was insufficient.”

But he argued the Sona revealed that, contrary to popular belief, Finance Minister Pravin Gordhan “does not have as wide ranging remit over wider government policy as people had come to expect”.

It also revealed that government has not understood that to avoid a downgrade a mind-set change on micro-economic policy was needed.

“That speech would be fine in other circumstances, but not in a situation where annual growth has been revised to below 1%,” said Ralph Mathekga, the head of political economy at the Mapungubwe Institute for Strategic Reflection. “The president gave the speech in a tense situation. His body language showed a man who was concerned about other things.”

Montalto was skeptical that the Gordhan’s budget would go further than Sona.

“First, we think specific hints would have been given here today, even if details waited till the budget,” he said. ?“Second, the left-wing policy content of today’s speech shows the political constraints still around Treasury even if they do have more space on fiscal [sic] and parastatals.”

The focus on land reform policies – especially the land caps and the end to foreign ownership – was “deeply non-investor friendly” he said and “a classic example of a policy going in wrong direction to helping growth”.

Mathekga said the president had missed an opportunity regarding SOEs. “He mentioned there is progress in stabilising them. But there is none. There actually needs to be a firm hand in reigning in SOEs, which look as if they are bleeding the state.”

Cosatu, in a statement on Friday morning, said government had been too soft on SOEs for too long.

“Their CEOs have been allowed to loot, privatise and outsource at will. Telkom, the Post Office and SAA’s workers have borne the brunt of labour broking. The federation said SOE’s need to be funded adequately to fulfil their developmental mandates and “workers cannot simply be squeezed all the time to make up for management’s failures”.

Montalto was, however, critical that, in talk of reforming SOEs in the address, no mention was made of private management being put in place to run them – which was a key call in meetings between business leaders and Zuma in recent weeks.

Terry Ramabulana, director of advisory services at Grant Thornton said it was disappointing that the president didn’t mention any significant programmes or developments regarding the drastic state of unemployment in the country.

“The biggest crisis and threat to the nation is the high unemployment rate of 34% but worryingly the Sona was thin on details, on how will we ensure as matter urgency, that all South Africans have decent permanent jobs,” the federation said. “It cannot continue to be business as usual by government and we expect that all departments, provinces and municipalities will shoulder the responsibility of creating jobs. We cannot afford to leave workers unemployed or without hope of finding decent permanent work.”

Mathekga said the content of the address showed the relationship between president and business appeared to be stabilising.

Costau, in its statement, said it remained convinced that the economic targets set out in the National Development Plan are neither appropriate nor realistic. It urged for the nuclear procurement deal to be cancelled. The federation requested for speedier progress on a legislated national minimum wage and labour market stability, and urged government to honour its commitment to end outsourcing labour in the state.

Cosatu, in the statement, made known it was deeply opposed to VAT and any lower and middle-income tax increases.?

The Banking Association South Africa (BASA) however welcomed the 2016 Sona as the first in a few years that has critically reflected on how to achieve economic growth in order to address the socio-economic challenges facing our country.