The Budget in a nutshell

Category Budget
Higher taxes on the rich, a freeze on public sector hiring, a valiant if over-optimistic attempt to rein in public debt - it's all there in the Budget announced today by finance minister Pravin Gordhan. Here are the highlights from Busines Day. 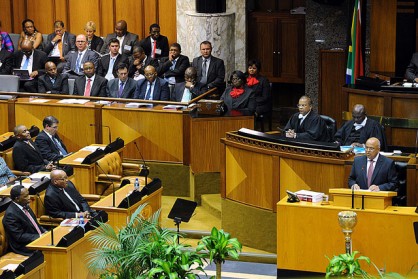 A higher tax burden for all except low- to middle-income earners, a higher fuel levy and a lower rate of growth in government expenditure this year have allowed Treasury to fill the holes left in its budget by lower revenue collection.

The measures announced by Finance Minister Pravin Gordhan in the R1.5-trillion budget he tabled in Parliament on Tuesday are just the start of what is anticipated to be a tough three years ahead as the government battles to ward off a credit ratings downgrade, address falling revenue and reignite economic growth.

The real pain will come in later years as the Treasury plans to reduce the budget deficit at a faster pace than previously projected, from next year. This will be achieved by limiting the growth in the public sector wage bill and imposing tax increases amounting to R18bn this year, and a total of R30bn in 2017-18 and 2018-19 together. Details of these tax increases will be worked out later.

A freeze will be placed on public sector employment from April. The government hopes by means of attrition, the removal of vacant posts, retrenchments, early retirement and voluntary severance packages to reduce the number of public servants by 20,000 and its wage bill by R7.2bn over the next three years.

The 2016-17 tax increases will be implemented over a broad base but higher-income taxpayers will bear the brunt of them, being compensated for only about 60% of fiscal drag. This means they will pay more tax. Fiscal drag is the effect of inflation which pushes taxpayers into higher tax brackets.

Mr Gordhan’s budget is underpinned by what some economists will regard as overly optimistic economic growth forecasts, which the Treasury projects at 0.9% this year, 1.7% in 2017 and 2.4% in 2018.

In his budget speech the minister placed heavy emphasis on the need to foster economic growth and for all sectors of society to “unite as a team” behind a common effort to pull the country out of the doldrums.

“We are resolved to restore the momentum of growth,” he said, promising that the government would address the institutional and regulatory barriers to investment and growth.

The government’s infrastructure programme is expected to contribute to this growth. The public sector will invest R870bn in transport, energy, housing, health and water infrastructure over the next three years.

The Treasury plans to achieve this deficit reduction by expenditure reductions of R10bn and tax increases of R15bn in 2017-18 and R15bn on each item the following year.

The head of the Treasury’s budget office, Michael Sachs, said on Tuesday that no change had been made to the 2016-17 expenditure ceiling because of the R15bn cut in the 2015-16 budget. He also noted that it was very difficult to change spending allocations made in October’s MTBPS. Hence most of the expenditure cuts will happen in later years.

Mr Gordhan emphasised at a media briefing before his speech that there would not be austerity and cuts of social grants and other essential services were not on the agenda.

However, government programmes would be reviewed to see whether they were necessary or whether their implementation could be delayed.

Spending on public servants’ salaries will be slashed, with the budget review saying that “government departments will need to adjust their human resource plans significantly”.

A reprioritisation of R31.8bn in allocations has been made over the next three years to cover the needs of higher education, the drought and the government’s commitment to the New Development Bank. Expenditure growth will be focused on post-school education and training, economic infrastructure, social protection and health services.

The National Student Financial Aid Scheme gets R2.5bn to clear outstanding student debt, along with a further R8bn over the medium term.

Reprioritisation has also released R1.1bn for drought relief in 2016-17.

Mr Sachs noted that social grants maintained a long-term parity with inflation and the lower than inflation increases were not meant as a cost-saving measure. They could be reviewed later this year.

The defence and security budget is one of the slowest growing over the next three years, at 4.1%, while the budget increase of agriculture, rural development and land reform at 4.9% also lags inflation.

The contingency reserve has also been boosted by R3bn to R6bn in 2016-17, and R10bn and R15bn in the following two years — compared with the R2.5bn, R9bn and R15bn respectively provided for in the MTBPS.

Debt service costs remain the fastest item of expenditure, consuming 12c of every rand of state revenue. They are projected at R147.7bn in 2016-17 and R161.9bn and R178,6bn for the following two years respectively, rising by an annual average of 11.45% over the period.

The public sector borrowing requirement is anticipated at R221.6bn for 2016-17.

Mr Gordhan announced a series of measures to cut government expenditure. Savings on the purchase of goods and services of R5bn are anticipated over the next three years, while the centralisation of government procurement under the chief procurement officer is expected to achieve savings of R25bn a year by 2018-19.

The measures announced by the minister also included restrictions on managerial and administrative vacancies; reduced transfers for the operating budgets of public entities; a new national travel and accommodation policy; and limitations on conference costs and new guidelines to limit the cost of motor vehicles purchased for political office-bearers

Tax increases for the rich, and a higher fuel levy

Personal income tax relief of R5.5bn has been extended — which is R7.6bn less than the R13.1bn that would have been required to account fully for fiscal drag. The benefit is mainly focused on lower- and middle-income earners. The primary rebate and the bottom three income brackets will be adjusted by 1.8% and 3.4% respectively.

Tax credits for medical aid contributions have also been granted to keep pace with inflation, at a cost to the fiscus of R1.1bn.

The general fuel levy rises by 30c a litre, raising R6.8bn more for the fiscus. Increases of between 6% and 8.5% in the duties on alcoholic beverages and tobacco products will be imposed, raising an additional R1.5bn and R767m respectively.

Transfer duty on properties valued above R10m will increase from 11% to 13% for properties acquired after March 1, yielding an additional R100m for the fiscus.

The government is also offering taxpayers who have undeclared offshore assets and income a six-month period from October to end March 2018 to regularise their affairs in exchange for income tax and exchange control relief. Only companies and individual — and not trusts — will qualify for the Special Voluntary Disclosure Programme.

A new tyre levy of R2.30/kg will take effect from October 1 to finance recycling programmes.

The taxes on incandescent globes, plastic bags and motor vehicle emissions are increased.

A new tax on sugar-sweetened beverages will be introduced from April 1 2017 in a bid to reduce “excessive sugar intake”.

A firmer hand for state-owned enterprises

No provision is made for more guarantees for South African Airways — which is teetering on the brink of insolvency and in desperate need of a cash injection.

State guarantees to state-owned companies now total R467bn, or 11.5% of GDP. “This is a source of pressure on the sovereign rating,” Mr Gordhan said in his speech.

The South African Post Office has been allocated an additional R650m in 2016-17 for recapitalisation — far short of the R2.5bn-R3.5bn it says it needs. The money was found through reprioritisation and does not affect the budget deficit.

Mr Gordhan said he and Public Enterprises Minister Lynne Brown had agreed to explore the possible merger of SAA and SA Express, and to look for a potential minority equity partner. Ms Brown is also discussing accelerated private sector participation in ports and freight rail with Transnet. State owned entities that were not necessary would be phased out.

He emphasised that the plans related to co-investment with the private sector and minority equity stakes, and not privatisation.

Earlier in the day Mr Gordhan said at the media briefing that deliberations were under way at a new board for SAA. These would be finalised shortly. He said a rigorous review would be undertaken of state-owned companies to ensure they operate efficiently.

The rand slipped sharply after Finance Minister Pravin Gordhan cut his 2016 growth forecast on Wednesday to 0.9%, down from a previous forecast of 1.7%, citing a recent drought.