ANC veteran Denis Goldberg, friend of Nelson Mandela and a Rivonia trialist who spent 22 years behind bars for his political beliefs, says the ruling party is in for a nasty shock in the upcoming local elections. He also wonders how millionaire Julius Malema can speak for the poor, according to Business Day. 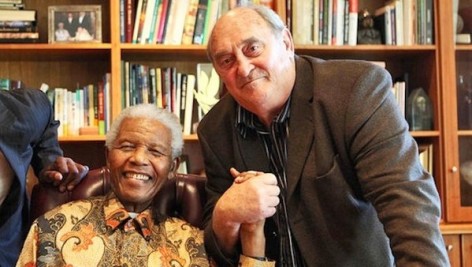 Rivonia trialist Denis Goldberg does not trust Julius Malema’s conversion from rich deal maker to champion of the poor, wonders why the Democratic Alliance hides behind the Economic Freedom Fighters’ skirts in Parliament and warns that Marikana could be the "first in a long series of tragedies" if SA’s economic structure does not change.

He also diagnosed the malaise in the African National Congress, prescribed a remedy and decried the capture of vital state institutions in a frank interview in London on Thursday.

With local government elections in May, Mr Goldberg says the ANC could be in for a shock.

"The results of the 2010 election campaign in which the ANC was severely challenged in Nelson Mandela Bay metro and in Johannesburg metro showed that historic ANC supporters were withdrawing their support." Instead of voting for opposition parties, this segment of the electorate was choosing not to vote at all.

"This is clearly a wake-up call for the ANC. To potentially lose control of these two metros, which are really the power bases of the ANC, means that something’s gone wrong," he said. It was also heartening that voters were basing their choices on political rather than racial grounds.

Mr Goldberg’s comments in London about the shortcomings of the current ANC government have been widely quoted. He’s called for a top-to-bottom leadership clear-out, and an end to cronyism and corruption.

"But I truly believe that only the ANC is in a position to bring about the transformation that we need in our country," he adds.

His diagnosis is that SA did not pay enough attention to structural inequality during the transition to democracy.

"The failure for me is that right from the beginning in Nelson Mandela’s presidency, partly because of our history and the need to achieve as peaceful a transition as possible without a big flight of capital, we did not tackle the issue of the gap between mass low wages and unemployment and the very high wages of skilled workers and managers — then mainly white and now white and black.

Marikana only the first tragedy

"If we do not address this issue very strongly, Marikana is for me just the first of a long series of tragedies that we will experience. And that will mean even more loss of support for the ANC.

"In addition there’s no doubt in my mind that the crony capitalism and outright corruption of many leaders — shown by the sentencing of John Block from the Northern Cape … there are others, not all, but many who have used their political position for self enrichment while deep, deep poverty remains — is what makes the electorate hostile (towards the ANC).

"The urban electorate more than the rural electorate, that urban element is very powerful and critical. And more than that, our young people — who are the best-educated age group that we’ve ever had because it’s 20 years after the advent of our new system — (are) also hostile because they are very impatient."

It was "sad they don’t understand the history of our country in education and how far we’ve come in only 20 years".

"I also find that even the DA think-tank, the Helen Suzman Foundation, says without doubt lives have improved for millions of South Africans but in Parliament that’s not the line they take, and our media don’t take that line, so there’s this constant battle for what’s objectively happening and the perceptions of people."

But "perceptions in politics are very critical" and "perceptions of corruption at the top have been so driven home and are probably true… and the electorate is aware of it".

He adds: "Therefore when I speak out about corruption and cronyism it’s not just about being moralistic. It’s about the future of the ANC as the party that can bring about transformation and the resolution of issues of mass poverty; I do it to support the organisation, not to attack it."

"We need to sweep out the stable and the only people who can do that are the ANC members. I believe that this cronyism exists from the top of national government, the top of provincial government through all the elements down to large and small municipalities. Therefore it requires an activist ANC to take control of who it elects."

He recalled Nelson Mandela telling the Congress of South African Trade Unions (Cosatu) conference in September 1993, "I know many of you are saying the ANC leadership will betray you. But you are the ANC and if you don’t trust the leadership elect a new one."

Reinvigorating the party through new leadership would "not happen overnight", Mr Goldberg said. "And if we don’t (clean up our act) and do badly in the May 2016 local elections, then I would have to say the outlook for national elections in 2019 will be very bleak," he warned.

Without mentioning any names, he called on ANC leaders to be "heroic" and "(step) back to make room for new people. Because we have to win those (national) elections and the perceptions that have been built up, rightly or wrongly, have an objective force in politics. It happens all over the world. The best service you can do is say, ‘I’m destroying my own heroic contribution to building of a new SA’."

On the capture of vital state institutions, Mr Goldberg is just as frank.

What are his thoughts on the battle at the South African Revenue Service?

"I can’t believe it, because it was always upheld as the model of our ministries and our government departments. Professionally run, tightly run with great integrity. Now I see the firing of the deputy commissioner Ivan Pillay. There was clearly the need for internal investigation (capacity), if companies and individuals are getting away with tax evasion and avoidance and doing illegal things, then officials are involved and it was necessary (to have that investigative capacity in SARS). To say this is usurping the functions of NIA (National Intelligence Agency) seems to me to be such a crazy sophistry (meant) to protect top people," he said.

"I’ve known Ivan. I know he was one of our agents for years in the ANC intelligence service and afterwards. He is a man of tremendous integrity as far as I know. He was travelling on Kulula airplanes and not high-priced airlines because Treasury is saying we have to economise — he could travel business class at his rank. I quite respect that."

What does he make of Malema?

"A man who made R53m in commission on one deal (allegedly). And he’s concerned about poverty? There’s something wrong here. Isn’t there a song, Smooth Operator’?"

Asked whether he trusts Mr Malema, Mr Goldberg said: "I can’t believe that a person who is such a smooth operator and who got so rich so quick can be the socialist and economic freedom fighter he claims to be.…

"I also think it’s outrageous that he should owe however many millions in taxes unpaid, which means his income was so mega!"

Turning back to the ANC leadership, he says: "I won’t name names because removing one person won’t change the situation one iota." Just as "removing the Rhodes statue does not change the systemic exploitation that goes on as a legacy of Rhodes. That’s what has to be discussed and thought about."