Team SA, led by Zuma, make fools of themselves at Davos

Category Business
President Zuma is in Davos with two senior economics ministers, Rob Davies and Ebrahim Patel. A greater deterrent to investment is hard to imagine, which is why no-one is taking Zuma seriously anymore, writes Peter Bruce in Business Day. 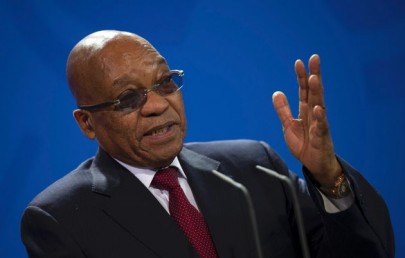 Apparently President Jacob Zuma pulled out of the main public function he was due to participate in at the World Economic Forum 2016 in Davos. It was the annual Forum on Africa. No explanation, as usual, although one of the local newspapers perfectly summed him up with a front-page picture of him asleep during one of the speeches he did attend.

So why go to Davos at all? It isn’t cheap, thanks to the president himself — but then he never pays for anything so he wouldn’t know. He’s one of those lucky people who never has to learn his own lessons.

No surprise that his failure to show up for the forum coincided with the breaking news that Zuma had in fact signed into law the so-called Investment Protection Bill (a law that will make foreign investments in SA less rather than more secure) on the quiet soon after he tried to appoint Des van Rooyen as finance minister last month. Just as he fired Nhlanhla Nene on the quiet, so did he sign this bill.

They were both rotten things to do and he knows it.

I seriously doubt any of the business delegation supposed to make up "Team SA" with Zuma in Davos will have been told about that. It makes fools of them. The regular Davos slogan for SA is that we are "open for business", but Zuma is in every conceivable way a deterrent to investment.

As are the two senior economics ministers travelling with him, Rob Davies and Ebrahim Patel. The Orwellian Investment Protection Bill is yet another gift from Davies to the country. As a trio, they are the worst possible advertisement for the country.

I am going to get this out of the way now, early in the year, so I don’t have to harp on about Davies and Patel. But I have come across an uplifting (and short) paper on industrial policy (that’s where these two gentlemen go to bury our hopes for prosperity) and why it almost always fails.

If you’re in a hurry, here’s the short answer, written earlier this month by a man called Shanta Devarajan, a Sri Lankan and the chief economist for North Africa and the Middle East at the World Bank. Excuse me, but I am going to quote him a lot.

"Every government, throughout history," he writes, "has been practising some form of industrial policy…. Unfortunately, the results have been disappointing, especially in some of the poorest regions of the world. India, despite rapid overall growth, has seen little employment growth in the formal manufacturing sector."

Sound familiar? Here’s why neither Davies nor Patel has any hope of succeeding.

Perhaps someone could just show this part to the president.

First, they think the failure to industrialise is a failure of the market. "The case (for state intervention)," Devarajan sighs, "is usually made in the form of elegant economic models that portray the market failure and show how intervention can lead the economy to higher growth. Many of these models show that the relevant market failure is the only distortion in the economy."

But, of course, it isn’t. Economies are messy.

Second, Devarajan blames what he calls political capture, which we South Africans know only too well.

"A common problem is that industrial policies are too easily captured by politically powerful groups who then manipulate it for their own purposes rather than for structural transformation."

He has in mind the pervasive influence of the family of the former Tunisian leader Zine al-Abidine Ben Ali in that country’s banking, telecoms and transport sectors, but we need the warning here too. If Zuma’s cronies decided they wanted to get into the coal-mining sector and co-opted the minerals minister to help them secure deals … oh, wait, they already did.

And, finally, there’s the small problem of ego.

Davies and Patel just know better than the rest of us. This shows itself when they target sectors for growth. Steel, automobiles, whatever. Picking sectors is a mug’s game and enormously wasteful.

If you read any of the many iterations of Davies’s Industrial Policy Action Plan or Patel’s New Growth Path, they stand out almost as cartoon versions of Devarajan’s obviously reasonable thesis.

"Sectors don’t trade; firms do," says Devarajan. "The reason we traditionally focused on sectors is that we didn’t have sufficiently detailed firm-level data in developing countries. Now that situation is improving, we are finding a great deal of heterogeneity among firms within a sector."

What he means is that some steel merchants are more efficient than others, as are some IT companies, some miners, some power producers. How easy is this stuff?

Yet it is precisely this that neither Davies, a communist, nor Patel, a trade unionist, can see. Business is just business to them, out to screw the workers and determined to enrich itself at the expense of the body politic from which it springs.

There’s no differentiating quality of management, caution in investing, nurturing of success. Take a fictional product, the rare and highly prized Flasnop Snabbler. SA has three producers, the rand is at an all-time low and there is no longer a local market for the things. Yet only one of them will succeed in the export market.

Why? No point asking our geniuses at the top. They simply wouldn’t appreciate the human and managerial effort at the bottom. No wonder no one is listening in Davos.