Can Zuma survive the revolt that is coming?

Category Politics
As the rand breached R16 to the US dollar and overseas traders calling the rand a one way bet to R18 or even R20, it's clear South Africa can no longer afford its president and his capricious style of rule. His firing of finance minister Nhlanhla Nene may be the last straw. 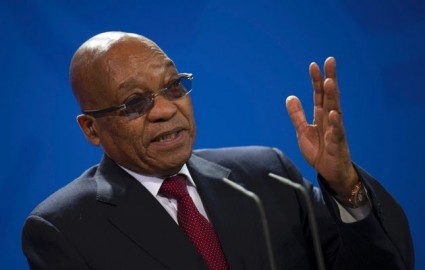 With the rand levitating between R15 and R16 to the US dollar, the cost to SA of President Jacob Zuma’s decision to “transfer” his finance minister Nhlanhla Nene and his director-general Lungisa Fuzile is fast becoming apparent.

In Nene’s place he initially appointed a relative nobody to the post in the form of Daviod van Rooyen, but a few days later announced that Pravin Gordhan – Nene’s predecessor – to the post he previously occupied.

This looked like panic on Zuma’s part. The hapless David van Rooyen has now been reposted as the new minister of cooperative governance and traditional affairs.

With Gordhan back in the finance hot seat, the rand recovered to R15,21 to the US dollar, but overseas analysts are calling the rand a one-way train, “easy money” for traders. Now that it has breached the R16 mark, R18 and even R20 are in sight. In which case SA government bonds are likely to be downgraded to junk, the interest on government debt will soar, and ship-loads of money will flee the country. Should this happen, recession is a certainty.

Calls for Zuma to be removed have intensified – and only the ANC can do that. But there are signs that elements within the ANC are moving to do just that. Former Public Enterprises minister Barbara Hogan implored every ANC member to stand up “and say this is enough. Zuma must be held to account.”

Cosatu issued a statement saying Minister Nene’s tenure was very short “and the economic sector does not cope well with abrupt and unqualified changes.”

Over 130,000 people had signed the petition #ZumaMustFall within a few days. Two marches are planned, one by an impromptu social protest group, another by the Democratic Alliance.

Nene was highly respected within the government and the business community. As is Gordhan. But the needless chaos generated by this president has reached a climax. So what was Zuma thinking? There’s no shortage of theories. According to Mail & Guardian, he removed Nene to neutralise his heir apparent, Cyril Ramaphosa, so he could anoint his ex-wife Nkosazana Dlamini-Zuma has his successor. There is also speculation that Nene and Ramaphosa were too cosy, that they wanted to remove SAA’s controversial chairperson, Dudu Myeni, a rumoured paramour of the president, who in addition to demanding a R5 billion bail-out for the airline, wanted to finance a massive Airbus purchase through a shady third company.

In September this year Nene rejected SAA’s application for a R5 billion bail-out. Nene, sensibly, wanted a new board for SAA and experienced management that would chart a new course for the airline. It’s clear that Nene was an obstacle to the Russian nuclear deal that had not been properly costed. The reported cost of this deal is R1 trillion (bearing in mind that the Eskom “six-packs” built in the 1970s cost roughly R1 billion apiece). Nene allocated just R200 million to the research of this programme would have been a slap in the face for Zuma and his cronies, according to Mzukisi Qobo, associate professor at the Pan African Institute, University of Johannesburg.

In other words, Nene was doing his job as a responsible finance minister. Zuma, by his latest action, has just signalled to the country that the Public Finance Management Act is subordinate to his arbitrary will. In doing so, his “push to flout procurement rules and avoid accountability signifies a destruction of institutions,” according to Qobo.

Astonishingly, it looks like Myeni – described by former SAA board member Russell Loubser as lacking in business acumen – used her influence with Zuma to have Nene removed from office. Myeni also had SAA’s former chief executive Vuyisile Kona removed. She then clashed with former public enterprises minister Malusi Gigaba, who was quickly shunted off to home affairs.

Prediction: Myeni will leave SAA, as the full sweep of her destructive actions are now coming to light. Zuma may see out his term, but he will become a lame duck president from hereon, as his own party reins him in. He is neither fit to rule, nor can the country afford his bizarre and arbitrary edicts.