Category Banking
Here's how you do it: round up the bankers who sank your country into bankruptcy and lock them away. Ireland is seeking extradition from the US of the former CEO of Anglo Irish Bank for his part in Ireland's 2009 banking crisis. But Iceland is way ahead of the pack, jailing 26 bankers for a total of 74 years. 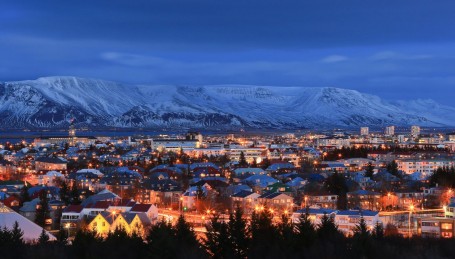 In two separate rulings last week, the Supreme Court of Iceland and the Reykjavík District Court sentenced three top managers of Landsbankinn and two top managers of Kaupþing, along with one prominent investor, to prison for crimes committed in the lead-up to the financial collapse of 2008. With these rulings the number of bankers and financiers who have been sentenced to prison for crimes relating to the financial collapse has reached 26, and a combined prison time of 74 years.

Eleven former bankers have been sentenced to four and a half years or more in prison. The former top bosses of Kaupþing have received the longest sentences to date. Hreiðar Már Sigurðsson, the former CEO of failed bank Kaupþing and Magnús Guðmundsson, the CEO of Kaupþing Luxembourg, top the list, having been sentenced to a combined six years in prison for extensive market manipulation, embezzlement and breach of fiduciary duties. The maximum combined sentence for financial crimes according to Icelandic law is six years.

Courts can sentence people to longer prison terms than six years in cases where the crimes are systematic and repeated, and in cases where people make a living from engaging in financial crimes. Future cases against Magnús and Hreiðar Már will determine if the courts consider the two to have engaged in financial criminality of a scale which justifies expanding on the maximum sentences.

In addition to Hreiðar Már and Magnús eight other individuals with connections to Kaupþing have been sentenced to prison. Sigurður Einarsson, the Chairman of Kaupþing has been sentenced to a combined prison term of five years in two cases involving market manipulation in the lead up to the 2008 crisis, while the Reykjavík District court sentenced Ingólfur Helgason the CEO of Kaupþing’s domestic division to four and a half years and Bjarki Diego, managing director of the bank’s loan division to two years, both for market manipulation. Three others received suspended sentences.

Two financiers with ties to KAupþing have also been sentenced. Ólafur Ólafsson, one of the most powerful “corporate Vikings” of the pre-2008 years and one of the largest shareholders in Kaupþing was sentenced to four and a half years for market manipulation by the Supreme Court while Skúli Þorvaldsson, a prominent investor was sentenced to six months in prison by the District Court for cover-up in a case involving the embezzlement of bank funds by the CEOs of Kaupþing and Kaupþing Luxembourg, Hreiðar Már and Magnús.

The Special Prosecutor for financial crimes has also charged former employees and top managers of the two other big Icelandic banks, Landsbankinn and Glitnir, for various crimes, including market manipulation.

Last week the Supreme Court of Iceland found Sigurjón Þ. Árnason, the former CEO of Landsbankinn guilty of market manipulation, sentencing him to three and a half years in prison, as well as Elín Sigfúsdóttir, the former director of corporate lending, was sentenced to one and a half years and Steinþór Gunnarsson, head of brokerage to nine months. In a second market manipulation case against Landsbankinn bosses, which is headed to the Supreme Court, Sigurjón, Ívar Guðjónsson the head of proprietary trading along with a brokerJúlíus Steinar Heiðarsson, were all sentenced to three months in prison by the District court.

Lárus Welding, the former CEO of Glitnir has been acquitted by the Supreme Court in one case involving breach of fiduciary duty and fraudulent loans, while another case awaits retrial by the District Court. Jón Ásgeir Jóhannesson, one of the most illustrious corporate vikings and the largest shareholder in Glitnir, is also awaiting retrial for fraudulent loans in the same case, along with several top Glitnir bosses.

Four former employees of Glitnir have been sentenced by the District Court to five years in prison for market manipulation and breach of fiduciary duty.

Several others have been sentenced or await trial

In addition to the bosses of the three largest banks several other financiers and bankers have been sentenced by the Supreme Court or the Reykjavík District Court for crimes in the lead up to the 2008 financial crisis. The most prominent of these was Baldur Guðlaugsson, the former permanent secretary of Ministry of Finance, who was sentenced to two years in prison for insider trading in 2012.

Sentences handed down by the Supreme Court

February 2012
Baldur Guðlaugsson, former Permanent Secretary of the Ministery of Finance: two and a half years for insider trading.

October 2013
Styrmir Þór Bragason, former CEO of MP bank: one year for money laundering and participation in the arrangement of fraudulent loans from S&L Byr in the Exeter case (see above).

March 2014
Lýður Ágústsson, former chairman of investment company Exista, one of the largest shareholders of Kaupthing: eight months and Bjarnfreður Ólafsson, former board member of Kaupþing: six months for lying to authorities and misleading markets.