How SAA shot down its rivals with taxpayer money

Category Competition Law
Competition never sat easy with SAA, which used R30 billion in taxpayer-funded bailouts over the last decade to shut down a string of competitors, from Sun Air to Trek and tiny Flitestar. No competitor was too small to overlook. Now its demons have come to haunt it in the form of two court challenges that could cost the airline over R6 billion in damages, according to Noseweek. 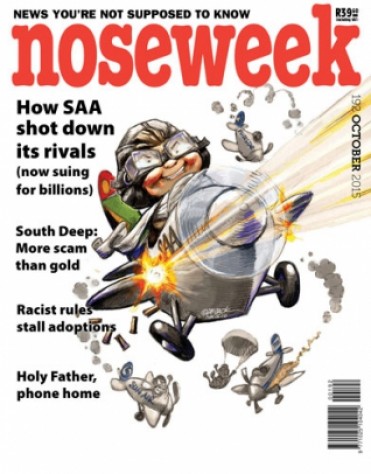 National carrier SAA, amidst ongoing senior managerial disorganisation, is currently facing two massive claims, amounting to around R6 billion after tax, one for R1 billion by Comair and the other for R2.2 billion from businessman Robert Watson, owner of Rethabile, BEE minority shareholder of now-defunct Sun Air. Add interest to that lot and the claim could well exceed R6 billion. As we previously explained, the claim relates to charges that SAA conspired with Safair to take Sun Air out of operation, then gobble up its share of the market.

The alleged conspiratorial agreement between SAA and Safair only came to light years later, and forms a crucial component of Watson’s claim. What seems to have happened is that SAA purported to take majority control of Sun Air, baulked when it came to paying for its shares, and promptly shut it down. This, says Watson’s court documents, is one of several frauds committed by SAA.

Then CEO of Safair, Ralph Boettger (who last year resigned as CEO of Sappi due to ill-health), shortly after the demise of Sun Air in 1998, provided the liquidators with a summary of events leading up the demise of the airline. He records a discussion with two Comair executives who believed Sun Air could have survived had SAA not intervened. It was estimated that 60% of Sun Air’s capacity was picked up by SAA, 30% by Comair and 10% by Nationwide. As a result of this, the Comair executives believed SAA benefited by as much as R200 million a year.

This agreement between SAA and Safair only came to light years later, and forms a crucial component of a court case now being brought against the national carrier by businessman Robert Watson, who has acquired the rights and claims of Sun Air’s former BEE shareholder, Rethabile. What seems to have happened is that SAA purported to take majority control of Sun Air, balked when it came to paying for its shares, and then promptly shut it down. This, says Watson’s court documents, is one of several frauds committed by SAA.

In a recordal of events by Safair, the following rather incriminating statement shows what SAA was planning: “Mr (Andre Viljoen of SAA) did allude to the fact that they engineered Sun Air’s closure and that Sun Air’s closure is highly profitable to them. Mr Boettger mentioned R200 million per annum for a once-off payment of R50 million to Safair. Mr Viljoen said the R200 million was towards turnover, not profit.

“Mr Boettger mentioned the additional turnover would go straight to the bottom line and Mr Viljoen smiled and agreed, ie. the conclusion is SAA carefully planned (as we knew) Sun Air’s demise and was prepared, right from the outset, to pay a price of R50 million plus in fact the R20 million Rethabile debt for ongoing profits of more than R200 million per annum irrespective of whether they acquired Sun Air or not.”

Rethabile should have long disappeared into the undergrowth, but the wheels of justice move inexorably forward, even if it takes a generation or so to get there. Rethabile’s shareholders argue that Sun Air was not insolvent, but this is in any event irrelevant to its claim.

Most, if not all, of the key players have since moved on to new gigs, barring perhaps Michael Katz, who was part of SAA’s advisory team and who remains firmly ensconced at Edward Nathan Sonnenberg (and whose name has once again surfaced as having been a member of Safa board at the time the bribe was paid by the South African soccer authorities to secure the 2010 Fifa World Cup).

Coleman Andrews pocketed R220 million for his 20 month stay at SAA before heading back to the US to head up a money management firm for high net worth individuals. His web biography says he once led SAA in a “strategic, tactical and financial turnaround.” That’s a rather generous interpretation of what happened. Andrews was a former colleague of US presidential hopeful Mitt Romney at Bain Capital, and the R350 million profit reported by SAA under his tenure was pure puff having largely been derived from the sale of the airline’s assets. His contract was terminated 14 months early with his legacy in tatters.

It was Coleman who opted to switch the SAA fleet to Boeing. Two years later, with Coleman out of the hot seat, SAA’s then managers switched back to Airbus. These planes are now being delivered to SAA at 25% above market price, according to Comair’s CEO Erik Venter.

Other airlines are punished for such folly. SAA has no such worries. The government is always on hand to help it out in its moments of need.

Competition is a sin

SAA was never comfortable with competition, even before Coleman Andrews arrived in 1998, and used every weapon at its disposal to club start-up airlines to death. Tiny Flitestar, with its fleet of six aircraft, was the first to fold. Flitestar knew what the flying public wanted and focused initially on the business traveller, offering excellent service and high levels of customer care – two areas where SAA was perceived to be weak. The arrival of a competitor to the moribund SAA stung the national carrier. Back in the early 1990s Flitestar captured 25% of the domestic market and boasted a rather healthy carrying load of 63%. SAA embarked on a campaign of dirty tricks, using its influence with the Safari ticketing system to make it appear that Flitestar flights were fully booked so that agents booked travellers on SAA instead. It got flight traffic control to give SAA preference so that Flitestar take-offs were delayed. SAA increased its commissions to travel agents and expanded its frequent flyer programme to the domestic market, knowing that its financial recklessness would be underwritten by government. Flitestar, with no taxpayer money to bail it out, succumbed to the bullying on 11 April 1994 when it ceased operating.

One down, just a few more to go. SAA then took out Trek Airways by paying out its shareholders, Safren, Rentmeester Beleggings and the de Moelenaar family to cease any competitive airline service for five years.

That left just Sun Air, Nationwide and Comair, which was a 25% shareholder in Sun Air. In July 1999, Sun Air’s fate was already sealed, as was made clear by Coleman Andrews at the SAA board meeting on the 23rd of that month.

There was no way the market could sustain four, or even three, competitors, according to Andrews. He argued that Sun Air was in trouble. Its costs had multiplied, while load factors had dropped about 20% in the third quarter of 1999. He pointed out that the Comair directors who sat on the board of Sun Air resigned in July 1999 because they believed the company was trading while insolvent, and wanted to avoid personal liability.

It was clear, he said, Sun Air was going down, the only question was would it be an orderly or chaotic shutdown. SAA had plans to take on 260 Sun Air staff and acquire Sun Air’s 62% BEE shareholding at a discount.

In late 1998 Sun Air, Nationwide and Comair complained to the Competition Board over what they termed predatory pricing by SAA, and the dumping of capacity in the market. Sun Air subsequently withdrew its complaint because, records Andrews at the board meeting, “they wanted to engage us in discussions about some sort of commercial relationship and we indicated we weren’t prepared to hold these discussions while they were clubbing us over the head on what we think is a specious complaint.”

Andrews then discussed a meeting that was held with Comair to limit adding capacity on domestic routes. “The effect of that is going to be to make sure there are sort of rational additions to seat capacity as they are needed over time, which would tend to keep prices from further declines,” said Andrews, adding that the board was delighted with the approach and Comair had “in principle agreed.”

This acquisition by SAA of a controlling interest in Sun Air would allow it to manage the liquidation. Said Andrews: “If it goes into a disorderly liquidation then we have a major threat, because if the whole thing gets handled by a judge and its disposition gets handled by a judge, he may well conclude to sell the entire operation to Virgin or KLM, who are keenly interested in entering this market.”

Stopping Virgin or KLM entering the domestic market became a key priority, not least because of the additional competition this would pose on SAA’s international routes. So SAA locked Sun Air into an agreement not to talk to other potential white knights, and calculated it could pick up 75% or more of Sun Air’s traffic. This, Andrews calculated, would boost earnings by about R125 million a year. SAA was prepared to pay R28 million for Rethabile’s 35,75% in Sun Air, Co-ordinated Network International’s 19,25% and any other debt or equity interests.

In August 1999, Comair and Nationwide signed on to a plan to support SAA’s acquisition of Sun Air shares in return for a capacity sharing arrangement on domestic airline routes. The plan was sanctioned by the Competition Board, which concluded that the South African airline market was too small to sustain four carriers. In a press release issued at the time, the Competition Board invoked “public interest” – the fact that Sun Air’s demise was inevitable, leaving passengers, creditors and staff in a dire predicament – as the motive for condoning SAA’s acquisition of a majority share in the apparently troubled airline. “The shareholders (SAA) then intend to immediately liquidate Sun Air,” said the Competition Board, making no reference to the potential for an anti-competitive bloodbath that was, according to former Rethabile shareholders, taking place in full public glare.

SAA would then proceed with an orderly shut-down of Sun Air, and settle R28 million owed by Rethabile and CNI to their respective banks. But government was also a creditor, to the tune of R20 million. For the plan to work, SAA had to get government to write off the R20 million. In August 1999 Andrews wrote to then transport minister Jeff Radebe informing him of the “rescue proposal” for Sun Air, which was a euphemism for killing it off. SAA and Comair would honour tickets bought by Sun Air passengers and absorb some of their staff.

Andrews painted a grisly picture of a company facing wipe-out within days. Sun Air had creditors claims of more than R70 million and cash and debtors of just R25 million, with “cash evaporating at a rapid rate.”

“SAA will continue to monetise the remaining assets and negotiate settlement with the other creditors in a thorough, professional manner,” wrote Andrews to the minister.

The collapse of Sun Air, now days away, would leave thousands of passengers stranded, employees unpaid and shareholders wiped out.

Discussions had taken place with Sun Air shareholders to sound them out on the possibility of SAA acquiring their shares, with the sanction of the Competition Board, with a view to effecting a rescue of the airline. Once the shareholders relinquished control of Sun Air to SAA, it should have been obvious that it would be snuffed out with stunning efficiency. Which is exactly what happened.