Category Politics
President Jacob Zuma is unschooled in economics and could care less. This shows in his selection of ministers who send wildly conflicting messages about how to grow the economy - from nuclear power stations to banning cigarette branding and mining. It's all a horrible mess, says a Business Day editorial. 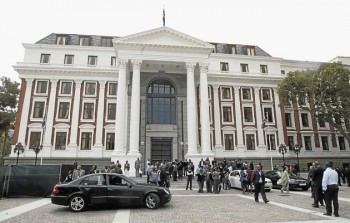 It is too easy to laugh off President Jacob Zuma’s flip-flopping on the state of the South African economy. Last Sunday, he officially opened Unit 6 at the Medupi coal-fired power station, adding, more than four years late, 800MW to the national grid. In the process, he wondered whether "we (should) come together and recognise the fact that our economy is sick".

This was just weeks after he called a hasty afternoon press conference to deliver an upbeat assessment of the economy. Things were not "all doom and gloom" and, in fact, were really looking pretty darn good. Considering.

JZ wouldn’t be the first CE to put a positive spin on poor results. But he would be one of just a few to do so sincerely.

That is because most CEs know when they are being lied to by advisers or consultants. Zuma would not be one of those and, again, it is easy to snigger at the fact that he does not comfortably connect his economy’s dots. Not only is he untrained in economics, he is not that interested in economics. And the fact that he should be is, by now, besides the point.

Zuma is a political animal. It is worthwhile remembering that, despite yet another dip in our economic fortunes, revolution is not in the air. Whatever critics might say, he has, in the face of great odds at times, held it together. We are a functioning democracy and, for the most part, lucky to be here.

That said, the fact that the president cannot maintain a consistent message about the economy is a problem not just for him but for the African National Congress. Are we sick or doing just fine? He has said both within three weeks.

The fact that he also asked business to make less profit is merely a measure of how little he understands how money travels and how the national wealth grows.

Part of the problem is the way he governs. The more confusion the better. So his Energy Minister, Tina Joemat-Pettersson, can in one breath insist that the nuclear procurement planned by the government is affordable and in the next insist that an affordability study is yet to be undertaken.

Even worse, she is able to say (at the Medupi event) that "we never said we’d build 9,600MW of nuclear…. Anyone who says we’ll build 9,600MW of nuclear is thumb-sucking". But it was in fact Zuma himself who told Parliament in his state of the nation address on February 12 that the "government is also exploring the procurement of the 9,600MW nuclear build programme as approved in the Integrated Resource Plan 2010-2030".

Oh dear. I rather approve of a bit more nuclear in our mix but I see a sharp reduction in the scale of the 9,600MW programme coming up. The Department of Energy is all over the place. Instead of being transparent, it has clouded issues to the point where the very integrity of the procurement is in doubt. What a mess this particular minister has made of it.

A big problem Zuma creates for himself is that he does not pay attention. Not at work, not in the Cabinet, not relaxing at home. Nkandla ran away from him because he never once looked at it and asked how much it was all costing. He listened, rather, to people who told him it was all perfectly reasonable. Now he has to live in a rural house built by the Department of Public Works. I cannot imagine a worse fate.

In government, he seems unable to concentrate long enough to see problems rushing at him. So instead of heading the visa debacle off at the pass months ago, he now has to assemble an interministerial committee to resolve it.

The same will happen when his health minister is able to publish pictures of smoke-rotted lungs all over cigarette packs, obliterating the brand altogether. The state makes R12bn a year out of the tobacco business. When the money disappears, Zuma will hastily assemble an interministerial committee to look into it.

The same applies to industry. China has flooded SA with cheap imports. Manufacturers have complained long and loud. Only now that jobs are being lost is the president interested.

The mines are retrenching and despite last-minute talks about imposing tariffs on cheap Chinese steel imports, steel worker lay-offs and plant mothballing are imminent.

What a sorry spectacle. Almost seven years of central planning and bogus, self-serving hubris from the departments of trade and industry and of economic development and our deindustrialisation speeds up. Zuma made poor appointments and the lamentable results will be one of the indelible marks of his two terms as head of state.

However good their intentions no doubt are, these two key departments have become to private sector business and to entrepreneurs (from multinationals to hard working street traders) what the Death-Eaters were to Harry Potter — they suck the joy out of enterprise.

The truth is that you can’t meticulously plan an economy like our old-style communists and assorted lefties do.

Sure, businesses like a bit of support; a tax break here and an incentive there.

But, for crying out loud, an economy is not the sum of every "linkage" our communist friends at the Department of Trade and Industry can count and put in a thick document. An economy is the "sum" of the confidence of the investors in it. No more and no less. It’s an intangible, guys. You can’t count it, and you certainly haven’t caused it to happen.

One measure of the damage apartheid did to us all is that the mere mention of the word "business" still conjures up the image of a fat, rich white man. And no amount of central planning by the Zuma administration, especially in these two departments, can disguise the fact that business is held in pretty low regard.

Really? From his 2011 state of the nation address came this: "As a developmental state that is located at the centre of a mixed economy, we see our role as being to lead and guide the economy and to intervene in the interest of the poor, given the history of our country."

You’ll excuse business for being confused about its role, but if Zuma wants to put a spring back in its step and get it investing, he will need to send it some pretty strong signals in his next, and probably final, Cabinet shuffle. November, December at the latest.