South Africans' confidence in the state is melting away, as shown by rising service protests, lower voter turnout and surveys which show the majority of people believe the country is headed in the wrong direction, according to Business Day. 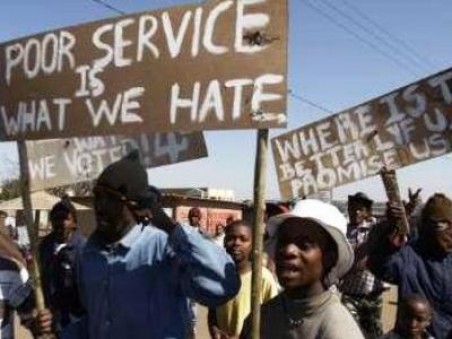 Indications are that more South Africans are turning their backs on the electoral process, instead of venting their frustrations at the lack of service provision by punishing parties at the polls. This will make political parties’ task hard next year, when they vie for municipalities and councils in local government elections.

The indicators — which are released annually and whose latest edition was made public on Sunday by Minister in the Presidency for Monitoring and Evaluation Jeff Radebe — help the state measure the efficacy of government policies and programmes.

The state has made strides in increasing life expectancy, living standards, access to education and electricity, water and sanitation, but it is lacking in governance and social cohesion, the data provided in the indicators show.

In 2004, there were 10 documented instances of service delivery protests — but there were 191 such incidents last year.

In 1994, 76% of the population felt the country was going in the right direction. A decade later, 73% of citizens expressed the same sentiment. However in 2014, 42% of South Africans thought the country was sailing in a safe direction — the lowest level of optimism was documented in 2013 at 33.6%.

"Fewer people are now feeling (that) South Africa is heading in the right direction. This calls for leadership at all levels," read the report.

The National Development Plan (NDP) defined leaders as those who possessed "integrity, honesty, trustworthiness, ability to listen, to innovate and build support to drive an essential agenda", notes the indicators report.

It will be used to track progress in implementing the policy goals spelt out in the NDP.

Last year 56% of South Africans were satisfied with the state’s provision of basic services; while the figure stood at 79% in 2004.

"Since 2004 there has been a decline in public trust and confidence in local government, reaching a low point of less than 50% in 2011 … there has been a slight up-tick but public opinion on delivery of basic services is a far cry from the highs recorded in the early 2000s," the report said.

Although the report showed a consistent pattern of dissatisfaction, this did not translate into an increased participation in the electoral process.

Instead, voter registration and participation were declining.

Political analyst Ebrahim Fakir — the manager of governance institutions and processes at the Electoral Institute for the Sustainability of Democracy in Africa — on Sunday said that the ANC-led government had done well, barring in governance and administrative glitches.

The state had performed well in the provision of housing, education and health; but its "woeful" handling of the economy had overshadowed everything else, he said.

It continued to prioritise the extractive sectors, such as mining and agriculture, to the detriment of potential elsewhere.

The Human Sciences Research Council, meanwhile, had recommended that shorter queues, locating polling stations closer to voters and an increased belief that voting would make a difference could reverse this trend, said the report.

The Institute for Security Studies had suggested the introduction of an automatic registration system, wherein the state automatically registered all those eligible to vote.

The indicators showed that young people were "increasingly exercising their right not to register to vote or even to vote".