Political analyst: SA could explode at any time

Category Politics
While the media and public obsess over Nkandla, whether Cyril Ramaphosa will be the next president of SA and other issues, the country faces a far deeper crisis - massive youth unemployment being just one of them, says political analyst Aubrey Matshiqi, according to Business Report. 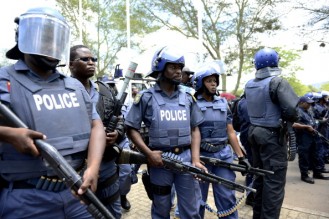 “It is argued in the (ISS) paper that we spend very little time looking ahead. We obsess over Nkandla, whether Cyril Ramaphosa is going to be the next president or not, some even argue that if President Zuma is recalled that all ills in South Africa will be remedied. We have a very short-termist approach to how we talk about and analyse the challenges facing the country,” he said.

With the current state of affairs, where millions of young people are jobless, Matshiqi warned that such a scenario could engineer radical change in South Africa.

“We should leave some room for events, phenomena that fall outside the realm of the expected. We must not think change will happen gradually. It might not. Every day in this country we wake up to the possibility of an explosion,” said Matshiqi.

“The levels of inequality and unemployment we have in this country and the lack of opportunity for millions of young people mean change might not occur gradually. You wake up every day to the possibility of an explosion in South Africa.”

Amidst numerous problems mounting up in the country, particularly electricity deficiency and inequality, Cilliers said the long-term ISS forecast predicted that South Africa’s future was not all doom and gloom.

“Despite the steady economic growth we have had since 1994, things in South Africa have improved in many ways. One example is the changes in so-called living standards measurements. The massive transfer in wealth and income that we have seen in South Africa in the 20 year period is a momentum,” he said.

“While we have an incomplete economic transition, the momentum of transfer of income and wealth between race groups in South Africa is well established. That is a significant change.”

He said the country was struggling to break free from problems of crime, inequality, poverty and unemployment.

“It is also true that there has been significant policy experimentation and there have also been significant failures along the way. The electricity blackouts that we see is only one of many examples of wastage. Today, the sense is South Africa is constantly engaging in crisis management,” said Cilliers.

“It is also true to acknowledge at the same time that since the ANC come to power in 1994, it has made huge investments on the structural drivers of economic growth - health, education, water and sanitation. These issues are generational in nature and investments take time to pay off, but they do pay off.”

He said while South Africa was not on “a happy spot”, it was a struggle for one not to completely succumb to “the negativity and wave of how bad things are in South Africa”.

Cilliers said the significantly increasing population could have spin-offs for the ailing economy.

“A larger population definitely translates to a bigger economy and faster economic growth, particularly with migration – it boosts your economy but reduces your average income levels. One of the reasons our growth forecasts remains relatively positive is because we believe South Africa will have a larger population,” he said.

“South Africa is in a demographics sweet spot. The percent of South Africans that are of working age in the population… that increases slowly and steadily from about 65 percent in 2015 to about 68 (by 2035) percent.

As the relative size of the working age population increases, it grows your economy. Of course you have to provide them the jobs and social services.”

Cilliers warned that political inclusion was a key ingredient of the envisaged economic growth.

“Clearly, despite the progress there is an incomplete political and economic transition. A whole cadre of groups of South Africans have bought into living off handouts and government contracts that are provided, not earned,” he added.