To save lions like Cecil, let hunters have their way

Category Crime
The killing of Cecil the Hwange lion by a US dentist is tragic, but what we really need is protection from the wildlife lobby and its counter-productive lobbying for bans on the trade in animal parts. Europeans telling Africans how to run their wildlife resources has yielded a surge in trade for illegal rhino horn, writes Simon Jenkins in The Guardian. 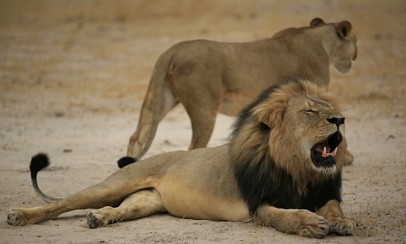 A dentist from Wisconsin goes hunting in Zimbabwe and bags its most famous lion, Cecil. In response, Cecil’s friends have gone hunting in Minnesota in the hope of bagging its most infamous dentist, Walter Palmer. Welcome to the world of charismatic mega-species, their predators and protectors. One thing only is for sure, the predators are winning.

Last month the Dallas Safari Club announced that one of its number had killed a black rhino in Namibia, one of four allotted for culling each year. The permit to do so had been auctioned for $350,000, which goes to the Namibian wildlife conservation service. Palmer paid $50,000 to kill Cecil, but who knows where that went.

Meanwhile, some 23,000 African elephants were killed illegally in 2013 and more than a thousand rhinos in South Africa alone in 2014. There is no sign that the ban on ivory trading adopted 20 years has done anything to help endangered species. The war on ivory has proved no more effective than the war on drugs.

Years ago I attended a conference on the trade in endangered species (Cites) in the Botswanan capital, Gaborone. It was not a happy occasion. The hall was festooned with grisly pictures of dead animals (while a very live cobra was found in my hotel room). On the platform white activists from Europe and America harangued African politicians on their inadequacies. The Africans shrugged their shoulders. What could they do, when the outside world craved hunting and ivory? The wildlife lobbyists seemed chiefly concerned with fundraising.

I am appalled at the idea of killing any animals for pleasure. But animals get killed. I eat meat sometimes, and my garden is afflicted with vermin I would readily slaughter. But in Botswana I was mostly left wondering what would Britain’s reaction be if hundreds of well-heeled Africans arrived to abuse us for not protecting “the world’s” red squirrels and songbirds. We would think it most rude.

The morality of a concern for someone else’s wildlife is curious. If Africa’s elephants became extinct – which is unlikely – I would certainly be sorry, but on the scale of global misery I am not sure how sorry. What would be crazy would be for it to happen because of the policies of those purporting to save them.

Huffing and puffing against the ivory trade is an international sanction against poor countries. Their seized ivory hoards are regularly burned “to send a message”, which is like burning their gold reserves. Steinway pianos with ivory keys are denied export licences. Britain’s royal princes promise to eliminate ivory from their palaces. In 2014 a “London declaration” saw diplomats and celebrities pledge an “end to corruption, and tougher penalties” for ivory traders. An exultant foreign secretary, William Hague, said “we have begun to turn the tide”.

What would Britain’s reaction be if Africans arrived to abuse us for not protecting 'the world’s' red squirrels?

This is patronising nonsense. Britain does not rule Africa any more. Partly thanks to the ban on open ivory sales, rhino horn fetches £50,000 a kilo in China and Vietnam and traders have grown very rich. According to the US Fish and Wildlife Service, the ban has seen business grow from a few hundred million dollars to about $10bn last year. This is policy at its most counter-productive.

The only way to stem the trade, as with drugs, is to stem demand. There has been some success in Japan, but not in the market overall. Where there has been modest success in protecting animals, notably in South Africa and its neighbours, it has come from exploiting the market, from turning poachers literally into gamekeepers, usually financed by trophy hunting.

Namibia’s conservation programme depends heavily on hunting, which earns it some $25m and reportedly contributes £130m a year to African conservation as a whole. Two years ago Tanzania’s director of wildlife, Alexander Songorwa, pleaded with Cites not to list his lions as endangered “on behalf of my country and all our wildlife”. Lions were his budget.

International agencies and their lobbyists have a vested interest in pretending that curbing supply works. It keeps them in with governments, gives them a tough image and “raises awareness”, especially with politicians and fundraisers. It clearly does not save elephants or rhinos.

Occasional visits to African game reserves have convinced me the entire continent cannot be made a militarised safari park. Such are the rewards to poaching that many African politicians are deeply involved. The height of absurdity has been reached in Kenya, where a herculean effort is being made to guard a “last” elderly northern white rhino. It actually arrived in 2009 from a Czech zoo. Only its semen seems likely to survive. Since Vietnamese traders would pay a quarter of a million dollars for its horn, it is hard to see why the Czechs cannot just help Vietnam breed its own rhinos.

Two decades ago, the American writer Raymond Bonner wrote his controversial attack on the African wildlife lobby, At the Hand of Man. All he wrote has turned out true, though what riled his critics was his revelation of the politics of the wildlife movement preceding the ivory ban. After years of study, Bonner concluded that the only sure way of preserving Africa’s mega-species was to allow communities to profit from their survival, to have an interest in guarding them when alive and harvesting their carcasses when dead.

This so called sustainable ranching is broadly the approach now prevailing with some success in southern African states. But to turn the continent from poaching to conserving depends not just on hunting. It depends on money from selling the ivory, legally traded from controlled culls, not left to criminals and their political allies. South Africa still loses over 1,000 rhinos a year to poachers.

Flooding the ivory market may stick in many a throat, but it may diminish the value the Chinese place on the product, or perhaps at least lead the Chinese to breed their own elephants and rhinos. A rare success of Cites has been in the recovery of crocodiles by managing the market for their skins.

As it is, Africans must endure lectures from British royals on how to run their countries, which is not a good idea. Britain’s continued support for the ivory ban does not work. It merely ensures that dead rhinos and elephants are more valuable than living ones. That way lies disaster.