The Credit Ombud reported a 50% increase in complaints over the last year, most of them related to "Emolument Attachment Orders". One large lender appears to have been responsible for a large percentage of these complaints, but the Credit Ombud does not say which company it was, according to Independent Online. 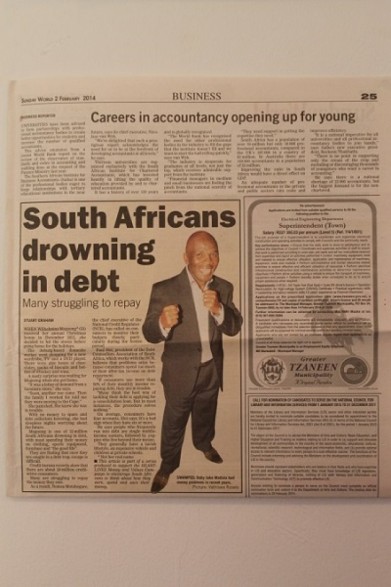 “Unfair” emoluments attachment orders (EAOs) accounted for a huge spike in the number of complaints to the office of the Credit Ombud last year, according to the ombud’s annual report for 2014.

An EAO is a court order compelling your employer to deduct from your salary money that you owe to a creditor. It is a common means of collecting unsecured debt, because a debtor’s income is their only form of security.

The ombud’s office is taking a keen interest in the application to the Western Cape high court by the University of Stellenbosch’s Legal Aid Clinic and 15 consumers challenging as unconstitutional the method used to issue EAOs. The main respondent in the case is Flemix & Associates, a firm of collection attorneys. Among the 17 other respondents are microlenders Bridge Debt and Onecor. Bridge and Onecor, both of which are now in business rescue, used Flemix as their collection attorneys.

Van Schalkwyk says “far too many” consumers are subject to EAOs “where there is some material breach of the application of the law and the process.

“Many consumers are paying far too much and for too long. Others do not receive statements and therefore do not know what their balances are. In some instances, the original amount handed over or the judgment amount is incorrect or overstated, and most consumers would not be aware of how the amounts should be calculated.

“We have dealt with numerous cases where the incorrect overstated amounts are never picked up and the employer deducts the amount as per the court order.”

Van Schalkwyk says his office makes every effort to educate consumers and employers about EAOs, “but there is still a lot of work to do in this area,” he says.

His annual report cites the following case studies, most of which demonstrate how consumers are harmed when an EAO is used.

EAO ON A RECKLESS LOAN

A consumer had an EAO against her for a loan granted to her in 2011. She had paid approximately R25 000 towards the original debt of R19 000 and alleged that she had overpaid. In the process of its investigation, the Credit Ombud found that the consumer was a low-income earner with a disposable income of less than R3 000 a month. Her expenses, which consisted mainly of microloan repayments, far exceeded her income. At the time the consumer applied for the loans in question, she was in a deficit of R260 a month and could not afford the monthly loan repayment of R1 603.

The credit provider agreed with the ombud that the consumer could not afford the loan at the time that it was granted to her. The monthly deductions from her salary were stopped, judgment was rescinded and the consumer was refunded R19 383.

FRAUDULENT CONSENT TO JUDGMENT AND IN DUPLUM BREACH

A consumer had an account with one of the large lenders. He defaulted and his account was handed over for legal action. This resulted in a judgment and an EAO on his salary. When the consumer approached the office of the Credit Ombud, he had paid up the account and applied for a rescission of the judgment. But he had always maintained that the consent to judgment was fraudulent. In other words, he did not sign the document consenting to judgment, which is required by law.

Following the intervention of the ombud, the credit provider arrived at the same conclusion that the consent was fraudulent and agreed to refund the consumer R9 979 in interest charged in excess of the in duplum rule (see “Definitions”, below). The consumer was also compensated R2 500 for legal fees incurred in obtaining a rescission of judgment, bringing the total refund to R12 479.

Following intervention by the ombud’s office, the consumer was refunded R4 996. The debt collector also ensured that the consumer’s credit profile was updated accordingly.

A consumer bought a vehicle in 2007. He signed the sale agreement but did not take delivery of the vehicle because it was defective. He also did not make payments on the account. For two years, the credit provider kept making contact with the consumer to get him to pay for the vehicle and instructing him to collect it, which he refused to do. In 2013 the account was handed to a debt collector who asked the consumer to make an arrangement to pay towards the full outstanding debt. The consumer contacted the office of the Credit Ombud.

When the ombud’s office asked the credit provider for supporting documents to substantiate the debt, it also raised the matter of prescription (see “Definitions”, below). In response, the credit provider conceded that the debt had prescribed and absolved the consumer of the debt – meaning he was no longer liable to pay the demanded amount of R57 611.

Contrary to the expectations of many consumers, the Removal of Adverse Consumer Credit Information Project (commonly known as the credit information amnesty) did not expunge debt. It expunged adverse information and judgment information relating to debt that had been repaid. This information stays on your credit report for a set time (retention periods) and helps a credit provider evaluate you, as a consumer of credit, and the risk that you pose to the credit provider.

* Prescription: A debt prescribes – or lapses – if a creditor does not start civil proceedings in a court to recover the debt within three years of the last payment. When the National Credit Amendment Act is promulgated (whichis expected to be any day now), it will be unlawful for a credit provider to attempt to collect a debt that has prescribed – even if you, the debtor, acknowledge the debt or make payment towards a debt that has prescribed. Before the Act was changed, prescription was interrupted if a debtor acknowledged the old debt or made payment towards it. The changes to the Act also make it unlawful for a credit provider to sell debt that has prescribed. The amended Act closes loopholes in the law and introduces enhanced protection for consumers, such as the provision dealing with prescribed debt.

* In duplum rule: In common law, the in duplum rule limits the interest that a creditor may charge on an account that is in arrears. Interest may not exceed the outstanding amount at the time of default. In other words, if you owe your creditor R5 000 at the time of default, interest must stop running when it reaches R5 000. However, the credit provider is still at liberty to charge you other costs and fees until you have paid off the entire debt. The National Credit Act provides for an extension of the in duplum rule so that it applies to costs and fees in addition to interest. This means that, when added together, interest and all other costs may not exceed the unpaid balance of the principal debt under a credit agreement at the time the default occurs.