Category Consumer Protection
When a disgruntled cell phone customer got no satisfaction from the company management, he took his campaign for consumer justice to the public - by way of a billboard proclaiming the company "the most useless service provider in SA." It was the start of an angry court exchange, writes Nastascha van Vuuren, a director of Werksmans. 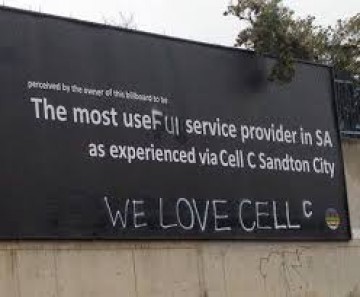 If you Google “consumer activism SA” you will not find many examples, other than complaints on sites like hellopeter.com. This is not surprising, as South African consumers are notoriously complacent.

It has accordingly not always been necessary in the past for large institutions to respond immediately to instances where consumers react adversely to bad service. The advent of social media has changed this, not just for these institutions but for their lawyers as well.  That is, lawyers must now think out of the proverbial legal box and provide their clients with ingenious (lawful) solutions.

This rings particularly true for the case where a dispute arose between a customer of a mobile network service provider.

The result: the consumer complained very publicly on a prominent billboard that the Service Provider was “The most useless service provider in SA”.

The High Court ruled that the application was not urgent and dismissed it on the basis that the Service Provider should have brought the application when the consumer first threatened to put the billboard up and that “It appears that the damage – if any – has already been done”.

The anti-ad billboard could therefore stay.

That being said, the Service Provider can, in future court proceedings, still make out a case of defamation by proving that the Consumer had published material which injured the reputation of Service Provider. However, the Consumer and/or his lawyers (armed with the knowledge that publication of defamatory material which is fair comment upon true facts and which is shown to be in the public interest is justified lawful possibly) pre-empted a case of defamation by stating in small print on the contentious billboard that the views expressed thereon were what the “owner of the billboard” “perceived” them to be. The Consumer will bear the onus to prove that defence on a balance of probabilities; however, if the Service Provider can prove malice or improper motive on the part of the Consumer, then the Consumer will forfeit that defence.

Even so, it would appear as though it was an opportunity lost by the Service Provider. The Service Provider should have taken a leaf out of its history books: in the past it effectively used a prominent comedian, who at first criticised the Service Provider very publicly, to become its brand ambassador. So, for example, instead of taking the conventional legal route, the Service Provider could have rather addressed the Consumer’s complaints and the blacklisting, and (in line with an ad campaign which it has been running) erect a billboard confirming that the power is in the consumer’s hands.

Some may argue that it may set a dangerous precedent for institutions to enter into negotiation with maverick consumers. This argument does not hold any water, as each case must be judged on its own merits. If the media reports are to be believed, then the Service Provider would have been aware that its claim for payment of R5,000 by the consumer was disputed by virtue of the complaint the consumer had lodged. The Service Provider should therefore have first tested the veracity of the complaint before proceeding to blacklist the consumer.

Then, in terms of section 72(4), after having received such evidence from the Service Provider the Consumer could have applied in the prescribed manner and form to the National Credit Regulator to investigate the disputed information as a complaint under section 136. The credit bureau would then have been barred in terms of section 72(5) from blacklisting the Consumer until the challenge by the Consumer had been resolved. It does not appear from the media reports as though this procedure was followed by either party.

No doubt protracted and costly litigation may now follow, but one thing is certain: this case may well become a springboard for more vigorous consumer activism in South Africa.