Category Media
German readers are deserting the mainstream media over its skewed reporting on Russia. It's not a gradual decline, but a wholesale plunge, as this article explains. But it all started when a German editor brought out a book detailing how German publications have been bought off by the CIA, according to Russia Insider.

What's going on in the German media is huge. It is one of the most popular subjects on our site. The US and UK media have been hugely biased in their coverage of Russia, but German media has been far, far, worse, to the point which strains credulity.

Now it turns out that part of the reason is CIA fiddling with German media outlets. Coming on the heels of the Edward Snowden revelations, this has Germans seriously ticked-off. Here's the latest revelation from our correspondent in Germany. 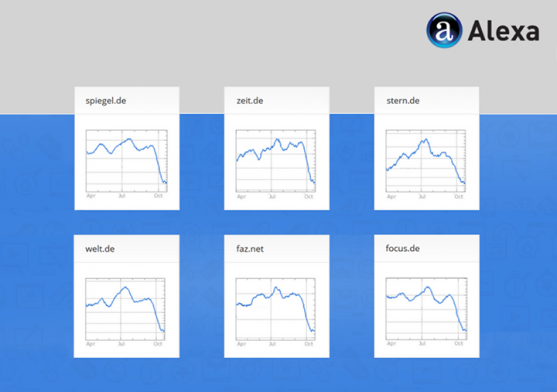 They call it the Ulfkotte-effect. And it's beginning to resemble an avalanche.

Since the publication of Udo Ulfkotte's “Gekaufte Journalisten“ in September – now a #1 Amazon bestseller, in which he charges that the CIA regularly bribes top German journalists, himself included, – German readers' disaffection towards their mainstream media appears to have crossed a point of no return.

Granted, sales of newspapers and magazines have fallen everywhere, not just in Germany. But this is different. This is a boycott that is affecting web traffic. Germans are steering clear of mainstream media websites.

Many Germans have not been too shy to announce their intention on social networks. Some have uploaded videos calling for a boycott on YouTube. Others have created groups calling for the same on Facebook.

The other visible result of reader disaffection has been that throughout September the number of unique visitors to six major German newspapers and magazines was falling steadily.

In October, it simply sank.

Yet up until early summer these same websites had been generating a large and stable amount of traffic. This is an unprecedented trend, and one that is wholly distinct from the fall in newspaper sales generally.

The graphs above show Google analytics provided by Alexa, a company that specializes in actionable analytics for the web.

The Spiegel's infamous “Stoppt Putin Jetzt” ("Stop Putin Now") July 29 cover apparently played a key role in incensing public opinion. An official readers' complaint against Der Spiegel's cover was upheld in August by the German Press Council. The latter ruled that the pictures of MH17 Malaysian Airliner's victims on the cover had been “instrumentalized in the context of a political statement.”

Germany's print media was warned even before that, on April 28, when Cicero, a leading German monthly, published a column titled: “Pride after the Fall”. The captions read: “Newspapers die. The reason: they go against their readers. The current Russia reporting is an example. That's not the way to engage with readers.“

The author, Alexander Kissler wrote: “Every quarter the newspapers sector grieves. This is when plummeting circulation figures are released. The curve travels from top left to bottom right, in fact it is not a curve anymore, but a straight line, unstoppable on its way to Zero.“

German media was quick to go on an offensive against Russia over the Ukraine crisis, but just as quickly found itself on the defensive against its readers.

Now, after a further worsening of circulation figures during the spring, web traffic has declined as well.

And it still looks like just the beginning. Has the time come to print a book titled: “2019: The Last Copy of Der Spiegel?” – if the German print media will survive even until then, that is.