Category International
President Robert Mugabe spoke in front of a virtually empty hall at the United Nations last week. This is a far cry from his triumphant address to the UN Assembly in 1980, when Mugabe was seen as a saviour of Africa. Zimbabwe's status as a Pariah state is now confirmed in the eyes of the world, according to MDC MP Eddie Cross. 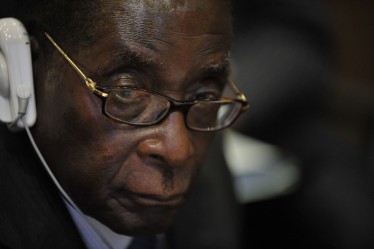 When Mr. Mugabe stood to speak at the UN General Assembly last week it was to a nearly empty hall. What a change from 1980 when he had the admiration and respect of the whole world and was regarded as one of the hopes of Africa. Today we do not fit quite in the same category as apartheid South Africa, but we certainly occupy a place in that most exclusive of groupings – that of a pariah State. Some would take it further and call us a Piranha State – a State that eats its own.

It’s very sad really as the victims of this slide into disgrace, (no pun intended) are not the politically connected and beneficiaries of the system of patronage that they have created to support the edifice of the State in the absence of either democratic or international support, are the majority of Zimbabweans in all walks of life.

How did we get from 1980 to 2014? The milestones on this journey are many but the main ones are, in my opinion, the following.

In 1983, Mr. Mugabe decided to deal with the only effective opposition to his rule in the form of Zapu. They had attempted a military coup a year before and now had a small number of “dissidents” operating as rebels in the rural areas. To crush the Party he recruited a special Brigade of troops from his own ethnic clan and then launched the Ghukurahundi campaign that was to last 4 years and lead to the collapse of Zapu and the 1987 unity agreement. Military action supported by the Police and intelligence services and accompanied by withholding food and other forms of support from the Communities which supported Zapu, resulted in a swathe of death and injury as well as forced expulsions.

Initially the international Community stood by silently and watched with dismay – opting for silence instead of principle in the name of stability and security. Encouraged by the success of his first major efforts at securing his tenure and control over the country, Mr. Mugabe went on to destroy at least 5 opposition Parties that attempted to challenge the new hegemony.

But the exercise ended the independence honeymoon and when the regime started to abuse the funds provided for land reform, the international Community withdrew support. This was followed by the 1997/98 land reform conference under UN auspices which although it produced a workable plan and an offer of international support was not implemented because it did not allow patronage opportunities.

Growing fiscal indiscipline in 1997 and 1998 with the unplanned payment of US$1 billion to war veterans and then the commitment to send 11 000 troops and heavy armor to the Congo to support Kabila at a cost of $1,5 million a day on top of an unsustainable budget deficit of about 8 per cent over the previous two decades, then triggered the withdrawal of support by the multilateral agencies.

In 1987 we had the food riots when the first civilian casualties were incurred as the Army fired live rounds at protestors in Harare and Chitungwiza. This was followed by strikes and the near shut down of the country by the Trade Unions and in 1999 the Unions formed the MDC to fight Zanu PF. For the first time Zanu PF was faced with a domestic challenge that it could not manage or suppress.

The next major milestone in my view was the 2002 elections for a new President. Zanu PF had been defeated in the 2000 referendum, had just survived the elections in the same year and now faced its first real threat to its power and control. They pulled out all the stops and only the desire by the South African government to prevent an MDC victory for fear of what that might do to the ANC alliance with COSATU; saved the day.

Hundreds of thousands of voters were denied the vote; hundreds of thousands were turned away from polling stations in the urban areas and for the first time rural voters were forced to vote under supervision and coercion. The South African government suppressed their own election reports and recognised an illegitimate return to power by Mr. Mugabe. It was a complete travesty and the international Community knew it.

What was left of the countries reputation was further damaged by the way the State handled the 2005 elections – securing a two thirds majority in the lower House and creating an upper House that was totally manipulated and loaded with appointed members.

Not satisfied with the victory, the State launched another national campaign – this time called Murambatsvina – or “let’s sweep out the rubbish”. In a period of three months, in the middle of winter, 300 000 homes were destroyed and 1,2 million people internally displaced and banished to the rural areas. The United Nations declared it a crime against humanity and categorized Ghukurahundi as Genocide.

Although the commercial farmers had no local or international constituency, what the State was doing to displace them and their staff was held up as a backdrop to all that was going on in the country and further damaged our status as a country. In what must rank as one of the largest heists in history, despite their citizenship, their constitutionally protected rights; the State simply took over 8 million hectares of productive, well managed commercial enterprise worth perhaps $30 billion – three times the national debt, and gave occupation rights to some 300 000 people who were selected as being either Zanu PF supporters or at least neutral and vulnerable to management and control.

The fiscal indiscipline of previous years, the reckless spending to try and maintain support and the ruthless destruction of the agricultural industry was eventually altogether too much and the economy simply collapsed. By 2008 we had to be dragged out of the water by our neighbors with the help of the international community who then fed our people and helped us patch up our health and education services.

Forced into an unworkable alliance with the MDC, a brief respite ensued. The economy recovered rapidly – GDP and State revenues rising from dismal levels in 2008 to reasonable levels in 2012. The EU, encouraged by attempts to put our house in order including, at last, a new Constitution, talked about a rapprochement and reengagement. The IMF and the World Bank began to resume activity.

Then came the 2013 elections. Zanu PF swept aside any pretense that they recognised democratic values in an election run by the State security agencies and the Army. Once again the MDC was crushed and the Zanu PF Party resumed its full control of the State. It was simply too much for the people and the markets, Zimbabwe went into mourning and what was left of the economy came crashing down. In a year we have lost a 100 000 jobs, a third of our banks and revenues to the State can no longer support our basic needs.

Zanu PF then turned to long time allies – first China, when rebuffed there with calls for leadership changes, economic reforms and reengagement with the West, Mr. Mugabe, in an old style cold war maneuver, went to Russia instead. Then Putin invaded the Ukraine and Zimbabwe along with other members of the elite Group of pariah States, voted in the UN to support Russia. Wrong move, wrong time, this latest act of lunacy has sealed our fate. We will remain a pariah State that is eating its children until; somehow, we can force a change of leadership.