To understand your future, study Zimbabwe

Category Economy
A new book out by two economists of the Austrian persuasion is a wake-up call for those who believe Zimbabwe’s well-documented plunge into the abyss cannot possibly happen to the rest of us. 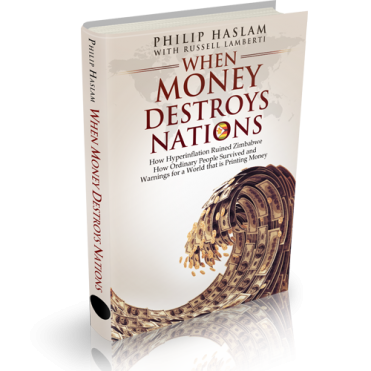 When Money Destroys Nations by Philip Haslam and Russell Lamberti is perhaps one of the most alarming books on the current state of the world to have come out in recent years. To set the scene, the authors describe in chilling detail how Zimbabwe went from 20% inflation in 1997 to 89,700,000,000,000,000,000,000% in 2008. I might have left out a few zeros there, but you get the point. The cause was entirely political – and, hence, avoidable. “The Zimbabwean government lived beyond its means for years, spending more than it could really afford on government programmes, including war and social security.”

It attempted to solve this problem with rampant money printing. “Money printing gathered momentum and fuelled an inflation frenzy, which poured down economic ruin upon millions of ordinary people. It ultimately led to the Zimbabwe dollar being abandoned as a currency beginning at the end of 2008.”

But Zimbabwe’s experience is not unique. In fact, money printing has become a global phenomenon that always, always leads to inflation and impoverishment. Anyone who believes that “it couldn’t happen here” had better read this book. In Zimbabwe, the money printing started slow and then, over the course of the next 11 years, spiralled out of control. The scale of the carnage wrought by this idiocy is well documented: one-third of Zimbabweans were forced into exile, repatriating funds each month to family members left behind; the government responded to food inflation by setting price controls which were promptly ignored; a black market in alternative currencies flourished as people sought to feed themselves anyway they could (hint: a bottle of whiskey holds its value surprisingly well in a hyper-inflationary environment); barter returned as a means of exchange; stores closed down; mass hunger ensued, resulting in social unrest which was promptly extinguished by the military.

On a visit to Zimbabwe at the height of the inflationary blitzkrieg, it was obvious that certain segments of the population were flourishing. The ruling party elites managed to corner the black markets in currency, fuel, flour, sugar and any number of commodities. Taxis would seldom carry more than a gallon of fuel at a time. When they ran dry, some enterprising young men would emerge spontaneously with a gas refill, dispensed from an old Coke bottle. There were daily queues for bread. Shops were barren, carrying a few bars of soap and packets of maize flour, and for this you had to freight in boot-loads of Zimbabwean dollars.

“Exact inflation became meaningless. Hyper-inflation is more a sense of being than specific rates. In Zimbabwe, no-one thought in percentage inflation. You just got a feel for it,” says Zimbabwean economist Jonathan Waters.

The real point of the book is that the same fate awaits other countries merrily printing their way out of trouble. Nor is there any easy escape for the governments of the US, Britain, Europe and Japan – whose printing machines have been fired into hyper-drive since the financial collapse of 2008. US government debt has grown by a teeth-clattering $6,5 trillion since 2008. That’s a 70% expansion of the money supply in five years, all of it legitimised by the so-called “Quantitative Easing” programmes initiated by the US administration during this time. Other major economies are likewise racing to expand their money supplies in an effort to keep the financial system afloat. “These countries are steadily adopting the dangerous policies that ultimately proved disastrous in Zimbabwe,” say the authors.

As if this were not bad enough, governments everywhere are making it increasingly difficult for ordinary citizens to conduct business and acquire and use private property without heavy oversight, regulation and taxation. And as governments struggle with their own enormous debts, the temptation to increase taxes is ever-present. In March 2013, bank customers in Cyprus with deposits larger than €100,000 had their money confiscated to bail out the Cypriot banks. The EU has already tabled a directive that would allow it to follow the Cyprus model to rescue European banks should they fail, while the US, Britain and Canada have adopted similar proposals. These countries also have their eye on private pension funds which they intend to plunder as public pension funds start to run dry. This is exactly what happened in Zimbabwe.

While a Zimbabwe-style land grab is unlikely in the developed world, a covert land grab is already underway. This is happening as a part of the Quantitative Easing programmes, where central banks print money to purchase mortgage-backed securities. As home owners are foreclosed, these properties end up in the hands of the central banks – a form of land nationalisation.

A global financial collapse is in the air. How long will it take? There’s no easy answer to that question. It took Zimbabwe 11 years to collapse after the start of its aggressive money printing programme. In pre-World War 2 Germany, it took nine years.

If this seems terribly bleak – and it is – there are boundless opportunities that arise in a Zimbabwe-style hyper-inflationary environment. This book ends with a survival plan for those who want to avoid the coming crash. For those Zimbabweans who crossed the Limpopo to South Africa, their lives improved immediately. The lessons of Zimbabwe ring true for people all over the world: cash in your pension funds and invest in something that is worthwhile; do not keep too much cash in the banks, and invest in hard assets that will appreciate as inflation accelerates; have a second passport; grow food and barter.

“Money printing and the collapse of confidence in your nation’s currency may be the greatest risk – and the greatest opportunity – you could face in your life. You can learn from those who have gone before. Make sure you are prepared,” warn the authors.

The book is written by two Johannesburg-based writers, Philip Haslam and Russell Lamberti, who is co-founder of the Ludwig von Mises Institute of South Africa. Both are clearly from the “Austrian school of economics” of which von Mises was the founder. In brief, Austrian economists argue in favour of unbridled free markets, and that involves removing central banks for the economic life of any country. Given the events unfolding before our eyes – in Zimbabwe and closer to home – the argument for removing central banks has never been more urgent.