Category Justice
BDS (Boycott, Divestment and Sanctions) South Africa recently won a freedom of expression case in the South Gauteng High Court after its billboards were removed by Continental Outdoor Media prior to the contractual expiration date, apparently after pressure was brought to bear by the Israel lobby. The court found this to be unlawful and unconstitutional and ordered the company to reinstate the billboards, writes Annie Robbins. 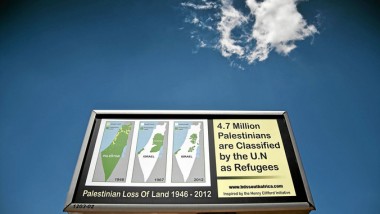 After a months-long court battle BDS South Africa (BDS-SA) won a “precedent-setting” freedom of expression court case on September 11. In October 2012 BDS-SA along with the Palestine Solidarity Alliance (PSA) purchased advertisements on billboards across South Africa. Not unlike what occurred when the Boston transit authority pulled Ads Against Apartheid’s “One Word” subway ads with no warning, South Africa’s Con­ti­nen­tal Out­door Media removed two BDS South Africa ads prior to their contractual expiration date without giving any notice to BDS-SA or the PSA. BDS is an international campaign against Israel, not unlike the anti-apartheid movement, aimed at isolating Israel "until it complies with international law and grants Palestinian rights."

At the time, Muhammed Desai, co-ordinator of BDS-SA claimed Con­ti­nen­tal Media was “pressured by members of the Israeli lobby to remove the advertisement in question,” which Continental denied. However, the Jewish Board of Deputies and the South African Zionist Federation boasted: “On contact with the owners of the billboard site, their error was immediately acknowledged and literally within six working hours (not counting the weekend) of the billboard having gone up it was removed from the site.”

In stepped the Legal Resource Center (LRC), one of South Africa’s largest and most prominent pub­lic inter­est and human rights law clinics, an inde­pen­dent, client-based non-profit organisation in Johannesburg which represented BDS-SA pro bono and took Continental and the City of Johan­nes­burg to court arguing the removal of ads violated South African’s constitutional right to free­dom of expres­sion because the city’s Adver­tis­ing Stan­dards Author­ity (ASA) Code of Con­duct, which stipulates no advertising that is “insensitive to the public, or any portion thereof, or to any religious or cultural group”, breached the constitution.

The judge of the South Gauteng High Court in Johannesburg agreed and ruled in favor of BDS South Africa ( pdf full and complete court ruling/judgment), declaring that the removal of the billboards was both “unlawful and unconstitutional” and ordering Continental to re-erect the billboards within 10 days and pay all court costs. The court also ordered the City of Johan­nes­burg to amend its by-laws.

In the High Court, Gauteng Local Division Johannesburg, on Thursday 11 September, judgment was handed down in Boycott. Divestment. Sanctions. South Africa and Sweetworks Advertising Agency v Continental Outdoor Media (Pty) Ltd, the City of Johannesburg and the Advertising Standards Authority. The judge found the actions of Continental Media unconstitutional and unlawful. As representatives of BDS South Africa and Sweetworks, the LRC welcomes the judgment.

As noted in the previous press release, the matter involves a contractual dispute centred on the right to freedom of expression. The dispute arose when Continental Outdoor Media removed a BDS South Africa billboard advertisement prior to the expiration of the agreed flighting period, without notice or consultation with BDS SA and Sweetworks. Continental contended that it was entitled to remove the billboard as the advert was contentious and controversial and, therefore, not compliant with the rental agreement, the Outdoor Advertising Bylaws if the City of Johannesburg and/or the Advertising Standards Authority Code of Conduct (ASA Code).

The judge found the removal of the billboards to be unconstitutional and unlawful and ordered Continental Outdoor Media to, within 10 days, reinstate the billboards for an uninterrupted period of 30 days. The judge further found that the relevant advertising by-laws of the City of Johannesburg are unconstitutional and gave the City a year in which to amend them.
From BDS South Africa’s press release:

Members of BDS South Africa would like to thank the legal team headed by Advocate Jason Brickhill and attorneys from the Legal Resources Centre (LRC) who represented BDS South Africa. The Legal Resource Centre is one of South Africa’s largest and most prominent pub­lic inter­est and human rights law clinics. The LRC includes as its leaders notable figures such Advocate Geroge Bizos (lawyer and friend of former President Nelson Mandela), Justice Jody Kollapen (former South African Human Rights Commissioner), Janet Love (former anti-apartheid activist and current South African Human Rights Commissioner) and others. BDS South Africa and the Palestine Solidarity Alliance (PSA) have also received pro bono support from the MLA and several other legal experts, all to whom we are grateful. The Board and staff of BDS South Africa would also like to thank all supporters that attended the court case in solidarity with BDS South Africa and the PSA. Continental Media was represented by Advocate Alan Eyles, Professor Iain Currie and the legal firm Edward Nathan Sonnenbergs (ENS).

Mthunzi Mbuli of BDS South Africa welcomed the court victory saying that: “This court victory is a victory against a major corporation by a people’s organziation. Continental Media was under the impression that they could squash this issue due to us being an activist organization, however, there were wrong. This court victory is also a victory against the SA Jewish Board of Deputies and SA Zionist Federation who form part of the Israeli lobby in this country and who use bullying and intimidating tactics to interfere with  Palestine solidarity efforts. This court victory will provide support to media agencies that come under pressure from the Israeli lobby for covering Palestine solidarity events, adverts and others actions.”

This is the second time that BDS South Africa has won a legal matter involving intimidation by the SA Jewish Board of Deputies. Previously in 2011 the SA Jewish Board of Deputies, tried (but failed) to ban a radio advert from being aired on SABC’s 5fm radio station. The advert [ below] featured a message of support for the cultural boycott of Israel by Dave Randall (lead guitarist of the UK music band, Faithless).