The tragedy of September 11, 2001, goes far beyond the deaths of those who died in the towers and the deaths of firefighters and first responders who succumbed to illnesses caused by inhalation of toxic dust. For thirteen years a new generation of Americans has been born into the 9/11 myth that has been used to create the American warfare/police state, writes Paul Craig Roberts, a former Wall Street Journal editor and economic advisor to President Reagan. 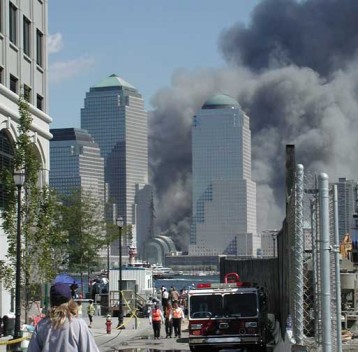 The corrupt Bush and Obama regimes used 9/11 to kill, maim, dispossess and displace millions of Muslims in seven countries, none of whom had anything whatsoever to do with 9/11.

A generation of Americans has been born into disdain and distrust of Muslims.

A generation of Americans has been born into a police state in which privacy and constitutional protections no longer exist.

A generation of Americans has been born into continuous warfare while needs of citizens go unmet.

A generation of Americans has been born into a society in which truth is replaced with the endless repetition of falsehoods.

According to the official story, on September 11, 2001, the vaunted National Security State of the World’s Only Superpower was defeated by a few young Saudi Arabians armed only with box cutters. The American National Security State proved to be totally helpless and was dealt the greatest humiliation ever inflicted on any country claiming to be a power.

That day no aspect of the National Security State worked. Everything failed.

The US Air Force for the first time in its history could not get intercepter jet fighters into the air.

All sixteen US intelligence agencies failed as did those of America’s NATO and Israeli allies.

Airport Security failed four times at the same moment on the same day. The probability of such a failure is zero.

Instead, the White House resisted for one year the 9/11 families’ demands for an investigation. Finally, a collection of politicians was assembled to listen to the government’s account and to write it down. The chairman, vice chairman, and legal counsel of the 9/11 Commission have said that information was withheld from the commission, lies were told to the commission, and that the commission “was set up to fail.” The worst security failure in history resulted in not a single firing. No one was held responsible.

Washington concluded that 9/11 was possible because America lacked a police state. The PATRIOT Act, which was awaiting the event was quickly passed by the congressional idiots. The Act established executive branch independence of law and the Constitution. The Act and follow-up measures have institutionalized a police state in “the land of the free.”

Osama bin Laden, a CIA asset dying of renal failure, was blamed despite his explicit denial. For the next ten years Osama bin Laden was the bogyman that provided the excuse for Washington to kill countless numbers of Muslims. Then suddenly on May 2, 2011, Obama claimed that US Navy SEALs had killed bin Laden in Pakistan. Eyewitnesses on the scene contradicted the White House’s story. Osama bin Laden became the only human in history to survive renal failure for ten years. There was no dialysis machine in what was said to be bin Laden’s hideaway. The numerous obituaries of bin Laden’s death in December 2001 went down the memory hole. And the SEAL team died a few weeks later in a mysterious helicopter crash in Afghanistan. The thousands of sailors on the aircraft carrier from which bin Laden was said to have been dumped into the Indian Ocean wrote home that no such burial took place.

The fairy tale story of bin Laden’s murder by Seal Team Six served to end the challenge by disappointed Democrats to Obama’s nomination for a second term. It also freed the “war on terror” from the bin Laden constraint. Washington wanted to attack Libya, Syria, and Iran, countries in which bin Laden was known not to have organizations, and the succession of faked bin Laden videos, in which bin Laden grew progressively younger as the fake bin Laden claimed credit for each successive attack, had lost credibility among experts.

Watching the twin towers and WTC 7 come down, it was obvious to me that the buildings were not falling down as a result of structural damage. When it became clear that the White House had blocked an independent investigation of the only three steel skyscrapers in world history to collapse as a result of low temperature office fires, it was apparent that there was a coverup.

After 13 years people at home and abroad find the government’s story less believable. The case made by independent experts is now so compelling that mainstream media has opened to it. Here is Richard Gage of Architects & Engineers for 9/11 Truth on C-SPAN:https://www.youtube.com/watch?v=3Zbv2SvBEec#t=23

After years of persistence a group in New York has secured the necessary number of valid signatures to put on the ballot a vote to investigate the cause of the collapse of the three WTC buildings. The official account, if correct, means that existing fire and building codes are insufficient to protect the public and that all other steel high rise structures are subject to the same failure. The group has been clever to frame the issue in terms of public safety and not in terms of 9/11 truth.

New York authorities, of course, continue to oppose the initiative. The question now rests on a judge’s ruling. It is difficult to imagine a judge going against the government in such a major way, but the group will have made the point that the government has no confidence in the truth of its own story.

Over these 13 years, physicists, chemists, architects, engineers, and first responders have provided massive evidence that completely disproves the official account of the failure of the three skyscrapers. The response to experts has been for non-experts to call experts “conspiracy theorists.” In other words, the defenders of the government’s story have no scientific or factual basis on which to stand. So they substitute name-calling.

9/11 was used to fundamentally alter the nature of the US government and its relationship to the American people. Unaccountable executive power has replaced due process and the checks and balances established by the US Constitution. In the name of National Security, executive power knows no restraints. Essentially, Americans today have no rights if the government targets them.

Those Americans born after 9/11 were born into a different country from the rest of us. Having never experienced constitutional government, they will not know what they have lost.

The anthrax attacks of October 2001 have been forgotten, but Professor Graeme MacQueen in The 2001 Anthrax Deception (Clarity Press, 2014) shows that the anthrax attacks played an essential role in setting the stage for the government’s acquisition of unaccountable police state power. Two Democratic Senate committee chairmen, Thomas Daschle and Patrick Leahy, were disturbed by the Bush regime’s overreach for carte blanche power, and were in a position to block the coming police state legislation and the ability of the executive branch alone to take America to war.

Both senators received anthrax letters, as did major news organizations. The TV network news anchors, such as Dan Rather, who compared the collapse of WTC skyscrapers to buildings brought down by controlled demolition, had not yet been fired by Republicans on framed-up charges.

Initially, the anthrax letters, which caused the deaths of some USPS employees, were seen as the second stage of the 9/11 attack. Fear multiplied. The senators and media shut up. Then it was discovered that the anthrax was a unique kind produced only by a US government military facility.

The response to this monkey wrench thrown into the government’s propaganda, was the FBI’s frame-up of a dead man, Bruce Edwards Ivins, who had been employed in the military lab that produced the anthrax and was driven to suicide by the false charges. The dead man’s colleagues did not believe one word of the government’s false story, and nothing in the dead man’s past indicated any motive or instability that would have led him to such a deed.

Initially, the US government tried to frame up Steven Jay Hatfill, but despite the best efforts of the New York Times and Nicholas Kristof the attempt to frame Hatfill failed. Hatfill received $5 million from the US government for the false accusation that ruined his life. So the corrupt US government moved on to Ivins.

Ivins was dead and couldn’t defend himself, but his colleagues did.

Most Americans are unaware of the extent to which the federal government owns the experts who can contradict its fairy tales. For example, no competent physicist can possibly believe the official story of the destruction of the three WTC buildings. But physics departments in US universities are heavily dependent on federal money. Any physicist who speaks his mind jeopardizes not only his own career but also the career of all of his colleagues. Physicist Steven Jones, who first pointed to the use of thermite in the destruction of the two towers had to agree to having his university buy out his tenure or his university was faced with losing all federal financing.