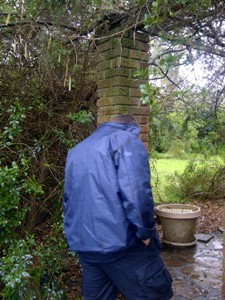 Cape farmer Yvonne Oberholster's home was invaded yesterday morning by the sheriff of Somerset West and agents of KPMG Services, despite her application to the Constitutional Court for leave to appeal against her sequestration. She was under debt review at the time. Now she is suing the liquidators for up to R10 million. 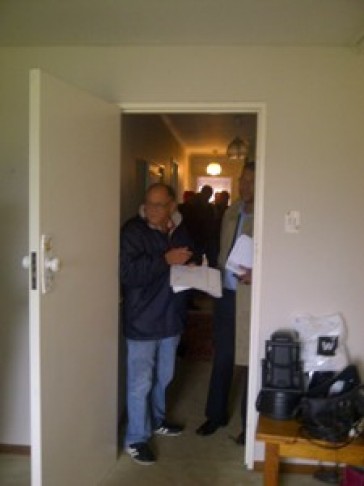 Yvonne Oberholster’s home was invaded yesterday morning at about 10am by a group purporting to be the sheriff of Somerset West and agents of KPMG Services, the liquidation and debt recovery arm of KPMG.

Oberholster was sequestrated earlier this year despite being under debt review in terms of the National Credit Act, which supposedly protects South Africans from sequestration proceedings.

She was ill and in bed at the time of the home invasion. While she was in bed, a gang of men burst into her bedroom and one man – apparently a KPMG Services agent by the name of Andrew Draai – pushed opened the door and said “So nice to meet you Mrs Obersholster,” who is 60 years old and suffering from hypertension. The gang of men broke the locks to her front gate and entered the house, pushing her husband Deon aside. One of the agents is pictured to the left. Another agent (above right) attempted to shield his face from the camera.

In terms of the law, only the sheriff is allowed to execute on a warrant. Legal advisers contacted by Acts Online confirm that KPMG had no right to be present at the home invasion. Mrs Obersholster has since instructed her attorneys, Deena Moodley and Associates, to launch damages proceedings of as much as R10 million for the infringement of her constitutional rights.

This happened despite her informing the invaders of her appeal against her sequestration before the Constitutional Court, which was lodged this week. Because Mrs Oberholster had applied to the Constitutional Court for leave to appeal her sequestration, she is protected under Rule 49(11) of the court rules against any attempt to execute against her. South African liquidators have tended to ignore this rule and grab whatever they can in violation of this rule.

KPMG were contacted for comment but did not reply to our questions at the time of going to press.

In a ground-breaking case that could impact the lives of tens of thousands of South Africans, Obersholster this week asked the Constitutional Court in Johannesburg for leave to appeal her sequestration by Absa Bank last year.

Oberholster was sequestrated by the bank last year after undergoing debt review in 2012. In terms of her debt review arrangement, she was required to pay R12,000 a month, which she did faithfully until she was sequestrated on 28 February this year by Acting Judge Salie of the Western Cape High Court. Salie refused her leave to appeal the sequestration in June, even though an amendment to the National Credit Act had been tabled by parliament specifically declaring that going under debt review did not constitute an act of insolvency. This amendment was passed by parliament in May 2014.

The outcome of her Constitutional Court case could bring relief – and, potentially, massive damages claims against the banks – to thousands of South Africans who have suffered the same fate.
In her papers, Oberholster also disputes the amount Absa claims it is owed. Absa secured judgment against Oberholster’s Stellenbosch farm claiming an amount of R4,2 million – when the bond outstanding was just R2,2 million.

“As a result of these actions by the bank, I have been hounded by the liquidators to get off my property. I went to the police to obtain a protection order against the liquidators, which is still pending."

KPMG Services was appointed as trustee of her estate. One of the KPMG Services directors, Jurgen Steenkamp, fired off an email to Oberholster’s then attorney demanding assets and records of the business, as well as unobstructed access to her property “any time they deem fit” and warned that he would obtain a search warrant if she did not comply. That KPMG managed to obtain a search warrant is regarded as highly unusual, given the fact that the police often battle to secure search warrants where drug dealers are involved.

Mrs Oberholster’s health took a turn for the worse and she was diagnosed with hypertension and depression after the sequestration. She was advised by her doctor to avoid stressful situations and placed on medication. In an affidavit for Absa, one of the bank’s legal experts, Heike Mayer, questioned the severity and authenticity of the diagnoses, even though she had no medical competence to pronounce on Oberholster’s health.

Oberholster then approached the police to seek a protection order against Steenkamp and KPMG Services, and was advised that the liquidators stood little chance of obtaining a search warrant. Based on the events of yesterday morning, the liquidators seem to have no trouble getting a magistrate to sign a warrant, something her attorneys are now investigating.

Interestingly, Oberholster met with Chief Justice Hlope of the Cape High Court to express her frustration with the legal process and was advised that liquidators are not allowed to pursue those who have appealed liquidation proceedings in terms of Rule 49(11) of the court rules. In other words, once you appeal or apply for rescission of a court judgment, all legal proceedings against you are frozen until the case is heard.

“I wrote to Chief Justice Hlope on a Sunday and he immediately replied and invited me to come and see him the following Thursday,” says Oberholster. “I took issue with how the Insolvency Act is being abused in South Africa and he advised me that any person is free to challenge these abuses through the courts. He is humble, helpful, and shows a genuine desire to be of assistance. He also remains totally impartial which I found very professional. He said he wanted me to keep him briefed on the progress of my case, and said his door was always open.”

She then decided to bring her case to the Constitutional Court.

“My argument to the Constitutional Court is simple. I went under debt review, the purpose of which is to allow creditors to reschedule their debts and I complied with every step of the debt review process – yet, the bank still went ahead and sequestrated me. I want the Court to issue a ruling on the legality of this, so that thousands of other South Africans in the same position can also hopefully benefit.”

Legal experts have argued that the purpose of debt review is to remove the creditor from the clutches of the Insolvency Act, specifically clause 8(g) which states: (An act of insolvency is committed) if he gives notice in writing to any one of his creditors that he is unable to pay any of his debts.

Based on this clause, some liquidators have managed to secure liquidation orders against people such as Yvonne Oberholster and Zulfa Samsodien who have placed themselves under debt review. This is now illegal. Theoretically, anyone asking a creditor to reschedule their debts or give them a month or two grace is committing an act of insolvency, and there seems to be no shortage of liquidators ready to pounce on the misfortunes of those facing a temporary cash drought.

Oberholster says she is neither factually nor commercially insolvent. Should she win the case in the Constitutional Court, it opens up the possibility of a major damages claim against the bank.
In her papers before the Constitutional Court, Oberholster writes: “It is submitted that the resolution of the issue that I have raised above constitutes an arguable point of law of general public importance as contemplated in the amended section 167(3) of the Constitution of the Republic of South Africa, 1996, which ought to be considered by this Honourable Court.

“There can be no doubt that it is a question of law that has materially affected many inhabitants of the Republic as credit consumers, that it has affected the provision of credit by credit providers and that it has not insignificant implications for the day to day functioning of the South African economy.

“It is also a question which holds implications for the dignity of credit consumers.”

The farm invaded by the sheriff and KPMG was 2.1 ha, and was her sole source of income, having previously lost a 178ha farm in Ceres a few years ago. She has been farming in Somerset West for 14 years, growing fruit and vegetables and trying to support emerging farmers by training them in agriculture and distributing their produce. ”My husband and myself also assist and mentor emerging farmers by supplying them with compost, seedlings and water saving irrigation methods,” she says.

Having found herself on the wrong side of business liquidation, she started to research the law and connect up with other people in similar circumstances. “I was really naive and trusting, but learnt rapidly that I had better get clued up on legal matters. I owe a great deal to people like Justin Lewis and Jonn Basson, and would never be where I am today without their help, guidance and support. I was extremely fortunate to have made contact with Justin quite some time back, and he has always had time to help me, no matter how busy he was.”

Her advice to people being hounded by liquidators or the banks: “Don’t allow yourself to be bullied and intimidated. Know your rights, and most importantly do research and learn. Knowledge is power. Network with people in similar situations, this is good for sharing knowledge and providing moral support to each other. Don’t be afraid to approach any person or body who may be able to assist, and never give up.”

Yvonne and her attorneys report that KPMG are grovelling and begging for forgiveness due to the pressure brought to bear by New ERA and Acts Online. Yvonne says she is in no mood for forgeivenss given the traumatic experience of the last few days. She has upped her legal damages claim to R12 million. Jonn Basson offers the following summary of the irregualrities in this case:

1.      (In terms of the warrant): Authority is provided only to the sheriff to enter and make an inventory of Yvonne’s assets, not the other 7 or so persons.

2.      The Sherriff was only warranted to make an Inventory not to take stuff away and then only of Yvonne’s assets not her husband’s or the other people’s asset.

3.      The whole warrant and the actions of the persons who participated in this raid is and was unconstitutional as detailed below.

5.      It is not clear who signed the warrant but it appears at his point as if it was not the Magistrate, which would render the warrant invalid.
6.      I cannot see the magistrate’s court having jurisdiction as the value of the items in question and the property exceeded R100,000.