Unimaginable evil: the US plans for nuclear first strike on Russia and China

Category International
This is a sociopath's wet dream: US plans for a nuclear first strike on Russia and China. What's more, the US thinks it can down any retaliatory missiles and so survive retribution for raining death down on its perceived enemies in the East. Paul Craig Roberts spills the dirt... 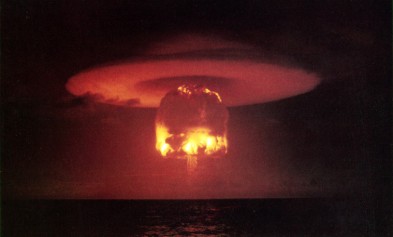 Pay close attention to Steven Starr’s guest column, The Lethality of Nuclear Weapons. Washington thinks nuclear war can be won and is planning for a first strike on Russia, and perhaps China, in order to prevent any challenge to Washington’s world hegemony.

The plan is far advanced, and the implementation of the plan is underway. As I have reported previously, US strategic doctrine was changed and the role of nuclear missiles was elevated from a retaliatory role to an offensive first strike role. US anti-ballistic missile (ABM) bases have been established in Poland on Russia’s frontier, and other bases are planned. When completed Russia will be ringed with US missile bases.

Anti-ballistic missiles, known as “star wars,” are weapons designed to intercept and destroy ICBMs (Inter-Continental Ballistic Missiles). In Washington’s war doctrine, the US hits Russia with a first strike, and whatever retaliatory force Russia might have remaining is prevented from reaching the US by the shield of ABMs.

The reason Washington gave for the change in war doctrine is the possibility that terrorists might obtain a nuclear weapon with which to destroy an American city. This explanation is nonsensical. Terrorists are individuals or a group of individuals, not a country with a threatening military. To use nuclear weapons against terrorists would destroy far more than the terrorists and be pointless as a drone with a conventional missile would suffice.

The Russian government understands that the change in US war doctrine and the US ABM bases on its borders are directed at Russia and are indications that Washington plans a first strike with nuclear weapons on Russia.

China has also understood that Washington has similar intentions toward China. As I reported several months ago, in response to Washington’s threat China called the world’s attention to China’s ability to destroy the US should Washington initiate such a conflict.

However, Washington believes that it can win a nuclear war with little or no damage to the US. This belief makes nuclear war likely.

As Steven Starr makes clear, this belief is based in ignorance. Nuclear war has no winner. Even if US cities were saved from retaliation by ABMs, the radiation and nuclear winter effects of the weapons that hit Russia and China would destroy the US as well.

The media, conveniently concentrated into a few hands during the corrupt Clinton regime, is complicit by ignoring the issue. The governments of Washington’s vassal states in Western and Eastern Europe, Canada, Australia, and Japan are also complicit, because they accept Washington’s plan and provide the bases for implementing it. The demented Polish government has probably signed the death warrant for humanity. The US Congress is complicit, because no hearings are held about the executive branch’s plans for initiating nuclear war.

Washington has created a dangerous situation. As Russia and China are clearly threatened with a first strike, they might decide to strike first themselves. Why should Russia and China sit and await the inevitable while their adversary creates the ability to protect itself by developing its ABM shield? Once Washington completes the shield, Russia and China are certain to be attacked, unless they surrender in advance.

The 10 minute report below from Russia Today makes it clear that Washington’s secret plan for a first strike on Russia is not secret. The report also makes it clear that Washington is prepared to eliminate any European leaders who do not align with Washington. http://rt.com/shows/the-truthseeker/162864-us-plans-strike-russia/A transcript is provided by Global Research: http://www.globalresearch.ca/us-plans-first-strike-attack-on-russia-or-china/5384799

Readers will ask me, “What can we do?” This is what you can do. You can shut down the Ministry of Propaganda by turning off Fox News, CNN, the BBC, ABC, NBC, CBS, by ceasing to read the New York Times, the Washington Post, the LA Times. Simply exit the official media. Do not believe one word that the government says. Do not vote. Realize that evil is concentrated in Washington. In the 21st century Washington has destroyed in whole or part seven countries. Millions of peoples murdered, maimed, displaced, and Washington has shown no remorse whatsoever. Neither have the “christian” churches. The devastation that Washington has inflicted is portrayed as a great success. Washington prevailed.

Washington is determined to prevail, and the evil that Washington represents is leading the world to destruction.

Paul Craig Roberts, a former Assistant Secretary of the US Treasury and former associate editor of the Wall Street Journal, has been reporting shocking cases of prosecutorial abuse for two decades. A new edition of his book, The Tyranny of Good Intentions, co-authored with Lawrence Stratton, a documented account of how americans lost the protection of law, has been released by Random House. Visit his website.