Category Justice
The mother and sister of Ian Brakspear, the Durban man whose business was liquidated in 2008 over a R7 million loan he neither asked for nor received, are filing a criminal complaint with the Hawks against attorney Justine Hoppe of Edward Nathan Sonnenberg (ENS) for bringing what they say is a false claim that resulted in the liquidation of the family trust. The liquidation, which was based on a forged high court order, left the family penniless. 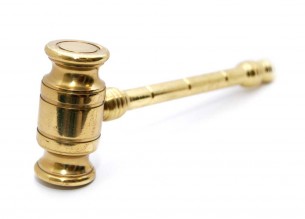 The police complaint being filed by the family in the UK this week seriously ups the ante in a case that is due to come before the Durban High Court in August this year, when the judge will be asked to rule on the legality of being liquidated on the basis of a forged high court order.

And in another development, at least two major public interest groups – which have asked to remain anonymous until they have filed their papers – have signalled their intention to join Brakspear as “friends of the court” when his case comes before the Durban High Court.

To summarise the case: Legal reform campaigner Justin Lewis says the Brakspear case has become a talisman for exposing the rot that has devoured the heart of the South African judicial system.  “If we win this case, then the whole house of cards comes down,” he says. “What happened to Ian has happened to thousands of South Africans. This is a Mafia-type operation.”

Lewis says the forging of court orders has become endemic in the judiciary. “In one case in the Northern Cape an advocate in possession of forged high court orders sought, in defiance of the Children’s Act, to claim ownership of a child by forging the judge’s signature. The presiding judge overturned the agreement that arose from these forged documents but refused to charge the advocate for contempt of court. Instead, he opted to report the matter to the law society.”

When the Judge President of the Durban High Court announced that such irregularities (as a forged court order) could be “regularised” we fired off questions to Mr Jake Jacobs of the Chief Justice’s office, asking him to explain what was meant by this. We wrote not once, but half a dozen times. We received no reply from the Mr Jacobs at the time of writing. We phoned and left messages on four occasions and spoke to his media lady. All we got was deathly radio silence.

So we must assume the people in charge of our judicial system see nothing alarming here.

On that point, Brakspear’s former attorney went to meet the Judge President of KwaZulu Natal apparently full of spunk and bravado in an effort to have the court hearing date moved forward. When he returned from the field of battle, what did he do? He fired his client. What, we wonder, went on in this meeting that made Brakspear’s attorney fold before the bell for the first round was sounded?

(Though not entirely relevant to the story, we note a disturbing trend of attorneys representing clients under liquidation proceedings abandoning their clients on the steps of the court – but that is another story we shall return to another time. Suffice it to say that there is more money in joining the feast than fighting for your clients.)

Now let’s return to the thrust of the story, which is the criminal charges being filed against ENS attorney, Justine Hoppe.

Justine Hoppe despatched a rather lengthy letter to Ian Brakspear this last week, explaining why this case was really very long and complicated and needed to go to oral evidence, which would push it out another year or two by which time Brakspear would probably be sequestrated (thereby placing his hopes of justice in the hands of the kind trustees who would then manage his estate).

Brakspear declined to comment as the matter is still to be put before the court. But he said we were welcome to look at all his papers and correspondence, which he then supplied.

Brakspear replied in a letter to Hoppe that the case is very simple: is a forged court order legal and binding or null and void? Yes or no? ENS says there are so many other matters that need to be ventilated that it will take several days of oral evidence.

“The strategy is very simple: drag this matter out as long as possible so they can sequestrate him, thereby remove his legal standing, and so execute the perfect crime,” says Lewis.

Brakspear's letter to ENS makes it clear he thinks the matter should be over in 10 minutes. He added that the forgery has not been contested by ENS, nor had they produced any evidence to refute his contention that the R7 million loan was fictitious. ENS, according to Brakspear, have not denied serving a blank, unsigned court order on the Master of the Court – in other words, a worthless piece of paper. What more can there possibly be to discuss? This "worthless piece of paper" was what was used to strip him of everything he owns.

It is also worth reprinting here the letter sent by Ian Brakspear’s mother Dorothy to Justine Hoppe this week:
Ms Hoppe

My daughter and I have just read your affidavit to the Master of the Court dated 13th March. My son forget to add that the very bad copy of a proof of payment you presented as evidence, proves the money coming out of the Brakspear Trust not Westley Trust and shows your whole affidavit to be devoid of any truth.

My daughter and I are now separately to my sons dealing with the Hawks, laying criminal charges against you in South Africa of fraud, perjury and perverting the course of justice.  Once we have a case number we will appoint an attorney in South Africa to keep a watching brief on the criminal investigation to ensure you do not escape sanction from your crimes.

We will also be laying, with help of our local member of parliament here in the UK, a complaint with the Law Society of South Africa against you.

The process of bankrupting and liquidating the farm took 2 working days - on Friday 19 December fraudulent were papers filed in court. By Tuesday 23rd December a court order was forged, the company was in provisional liquidation, the company director removed and assets of the company placed in master of court hands.

To unravel this horrendous fraud and forgery is now in its sixth year despite my sons request for the Judge President of the KZN to intervene way back in 2012.

The consequences of this fraud have been devastating to me financially, emotionally and health wise.

You must really sleep well at night Ms Hoppe, knowing that you and your partner in crime Mr Katz earned millions of Rands committing fraud on me, an 80 year old widowed ex-Zimbabwean farmer’s wife,  forcing me to sell my home in Durban and move to the UK and live off a pension from the UK government, while your client NEDGROUP gloats in the fact that they have been able to cover up the most egregious breaches of trust by their staff with this fraudulent conspiracy and use our family money to pay their legal expenses while we are left penniless and my son has to fight this battle in court on his own.

Dorothy Brakspear and Alison Bowler
Dorothy, at 80 years old, seems to have plenty fight left in her. The Brakspear case is turning out to be something of a watershed case on which the integrity of the entire South African judicial system rests. We will, of course, be there along with the friends of the court to bear witness to the court’s findings. We also want to know if a forged court order is considered legal and binding, or void.