Despite the fact that the Democratic Alliance got more than three quarters of a million black votes, the latest election results show that South Africans continue to vote along racial lines, according to City Press. 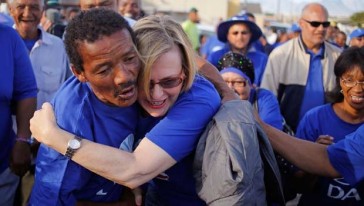 ANC national executive committee member Lindiwe Zulu said her party discussed the matter on Saturday and laments a “painful situation whereby voters make decisions based on race and not on policy”.

She added: “Although the ANC strives for a non-racial society, it is not an easy feat. We are not going to be able to do it alone. We need everyone, including white business, to work with [us],” she said.

But as long as a large gap exists between rich and poor, voting along race and class lines will continue for years to come, according to Economic Freedom Fighters (EFF) Gauteng premier candidate Dali Mpofu."We knew exactly that people would cast their votes based on the colour of their skin. That is why we only campaign in the townships and squatter camps because most people in the affluent suburbs would not hear us."

“This … shows that the inequalities that were there during apartheid still persist today. We have not succeeded in making South Africa a non-racial, non-sexist and equal society despite what the DA might say about its voters.”

But DA leader Helen Zille said the outcome of the elections and her party’s growth in Indian and black communities were signs that theirs was not a whites-only organisation.

“We grew our support among black South Africans from 0.8% in 2009 to approximately 6% in 2014; 40% of these votes were won in Gauteng,” she said on Friday. Roughly 760 000 black South Africans voted for the DA. This is more than the IFP, the [National Freedom Party], the PAC and the [United Christian Democratic Party] combined and more than any other party besides the ANC and EFF.

Roughly 760 000 black South Africans voted for the DA. This is more than the IFP, the [National Freedom Party], the PAC and the [United Christian Democratic Party] combined and more than any other party besides the ANC and EFF.

"Twenty percent of our votes in this election were cast by black South Africans,” said Zille.

There was definite evidence of race-based voting.

In ward 43370209 in Chatsworth, Durban, where 92.5% of residents are Indian, the DA won with more than 61% of the vote of the provincial election. Here, the Minority Front party of late leader Amichand Rajbansi scored more than 25% of the vote.

Only 8.65% of residents voted DA in the home suburb of that party’s Gauteng premier candidate, Mmusi Maimane.

But the figures change slightly in more affluent areas. In Pretoria’s Waterkloof, the DA received more than 70% of the vote nationally although 24% of the residents are black.

Mari Harris, the public affairs director of market research firm Ipsos, said despite signs that more people were voting for parties regardless of colour, large parts of the population still did.

She added that 95% of the ANC’s support came from black voters.

The first elections were like a racial census, but that is now slowly changing. This time, the DA succeeded quite well to get support from all groups.

“The example of Chatsworth shows that more traditional communities tend to vote according to race,” she said.

"However, it will probably take another generation or so before we will have all true non-racial parties with support from all population groups."

Harris said that “voters’ solidarity” started changing “when they move into the middle class”.

“It doesn’t happen to everybody, but the moment families move into the traditional suburban setup with three bedrooms and two children, they start looking at other things besides ethnicity and past loyalties.

“This explains the voting pattern in a place like Bendor.”