The US government is living in a web of self-deception if it thinks that its waning global power has gone unnoticed in the East. Russia, China and Iran are formulating a new global order that will see the US and its allies increasingly isolated and economically marginalised, writes Seyed Mohammad Marandi in Al Jazeera. 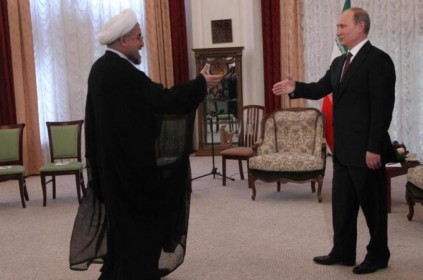 At the Fourth Summit of the Conference on Interaction and Confidence-Building Measures in Asia (CICA) that opened May 20 in Shanghai, Iranian President Hassan Rouhani will meet with both Chinese President Xi Jinping and Russian President Vladimir Putin (pictured left). Among other things, the summit will underscore how rising non-Western powers are playing ever more prominent roles on the global stage.

However, Western elites remain stuck in a time warp, wherein the United States and its European partners are the imperial masters of all they survey.

In this regard, it is an interesting coincidence how mainstream Western media outlets consistently produce narratives that are almost indistinguishable from official government statements regarding countries and leaders with dissimilar worldviews from their Western counterparts. For instance, we repeatedly hear about the democratically elected "dictators" in Venezuela, yet we are assured that friendly dictators are "moderate reformers".

Another fascinating coincidence is that Western human rights organisations pursue initiatives and policies closely aligned with those of their own governments. When the US accused the Syrian government of using chemical weapons against its own people - notwithstanding noteworthy evidence to the contrary and despite the fact that it was fine as far as Washington was concerned when former Iraqi president Saddam Hossein attacked Iran with chemical weapons - some human rights advocates stood shoulder to shoulder with President Barack Obama in advocating "shock and awe" in Damascus for humanitarian purposes.

Contrary to what Saudi Princess Basmah Bint Saud states, Amnesty International's soft spot for Saudi Arabia may be linked to more than just oil - for this renowned organisation is a true believer in promoting human rights through liberal imperialism. Until recently, Amnesty USA was led by a former senior US government official who is a leading "humanitarian interventionist".

On the side-lines of the 2012 NATO summit in Chicago, Amnesty International campaigned for NATO's continued occupation of Afghanistan under the rubric, "keep the progress going"; Amnesty's shadow summit for Afghan women was graced with the presence of none other than former US Secretary of State Madeleine Albright known for commenting that over half million dead Iraqi children as a result of sanctions "was worth it".

It is refreshing to see such consensus at all levels of public discourse in the "Free World". It seems that there is general agreement among European and North American elites that Western objectives are well-intentioned, even if highly generous doses of hypocrisy are administered on the way. Hence, the British foreign secretary, speaking on behalf of the so called Friends of Syria, just days ago welcomed "the fact that preparations for the presidential elections on May 25 are proceeding well" in violence-stricken Ukraine where roughly half the country rejects the Kiev-based coup regime.

Then, literally a minute later (and with a straight face), he condemned the "Assad regime's unilateral plan to hold illegitimate presidential elections on June 3. We say in our communique that this mocks the innocent lives lost in the conflict". Apparently there has been no significant loss of innocent life as a result of illegal cross border support for extremists and al-Qaeda affiliates in Syria over the last three years.

It is also remarkable that any perceived rival to Western power can almost immediately be compared to Adolf Hitler without raising many eyebrows. Benjamin Netanyahu and other Zionist advocates can repeatedly threaten the Iranian people with military strikes, yet simultaneously promote the false logic that the Islamic Republic wishes to create a holocaust by allegedly denying the Holocaust (whatever that means).

In recent weeks, we have once again returned to 1939 as the bizarre Hitler analogy is now being used to describe Putin. The irony here is that the right wing neo-Nazi groups within the pro-Western Kiev regime consider themselves as the Russian president's greatest foes. Indeed, for some, al-Nusra Front, Islamic Front in Syria or Islamic State of Iraq and the Levant analogy would be somewhat more appropriate to describe the Ukrainian political party, Right Sector.

Former Egyptian President Gamal Abdel Nasser was another one of many Hitlers in Western political discourse. When in 1956, he nationalised the Suez Canal, then British Prime Minister Anthony Eden viewed his actions as an insult to the British Empire. However, the "Suez moment" was a classic case of overreach for a rapidly declining empire that politicians in the US today should ponder.

Their winner-take-all worldview, which has already resulted in widespread inequality and relative economic decline in the US, has also, since 2001, conditioned a series of "moments" whereby Washington's arrogant zero-sum mentality has produced one strategic failure after another.

The US government is caught in a web of self-deception if it believes that its declining global influence has gone unnoticed among the world's rising powers. Obama's pivot to Asia is viewed with scepticism, as the US already has more than it can handle in Ukraine, west Asia and North Africa. The real Asia pivot is driven by rapidly rising economies, especially China, as countries with major oil and gas reserves such as Russia, Iran and Iraq are already turning eastward.

In a 2012 report that some consider to be too conservative in its prognostications, the US multinational investment banking firm Goldman Sachs projects that by 2050 the US will be the only Western power among the top five global economies, with an economy much smaller than China's. In addition, the World Bank predicts that the US dollar will lose its current global dominance in roughly a decade.

Ironically, instead of attempting to build new bridges and forging new partnerships to stall their declining global status as the balance of power shifts away from Europe and North America, Western governments unwisely antagonise key powers. Spying on the Brazilian president does not help, denying a visa to the next Indian prime minister can spell trouble ahead, giving strong warnings to China can raise tensions - but threatening Russia with economic warfare may prove to be a game changer.

Of course, the US and its allies have already engaged in inhuman economic warfare against ordinary citizens of the Islamic Republic of Iran. The US has targeted the Iranian banking sector as well as the central bank and has threatened Iran's trading partners with punitive sanctions if they do not abide by US laws.

Many countries have protested against these US imperial dictates, but have so far largely abided by US demands in order to avoid its aggressive behaviour. However, with threats now being made against the Russian Federation, alarm bells have begun ringing, as powerful countries see themselves as potential future targets. Economic warfare against another major power will force emerging economic powerhouses to seriously think about the future of global financial and communications systems as well as the immediate need to enhance cooperation and to restructure the global political and economic order.

During the CICA Summit in Shanghai, Presidents Xi Jinping, Rouhani and Putin definitely have a lot to talk about.