While Ukraine and Russia are on a war footing, China is busy doing what it does best - quietly take over another country without spilling a drop of blood, according to Tyler Durden at ZeroHedge. This time it is Zimbabwe, and confidential reports also suggest Mugabe is on China's payroll.

While the developed world is focusing on the rapidly deteriorating developments in the Crimean, China, which has kept a very low profile on the Ukraine situation aside from the token diplomatic statement, is taking advantage of this latest distraction to do what it does best: quietly take over the global periphery while nobody is looking. 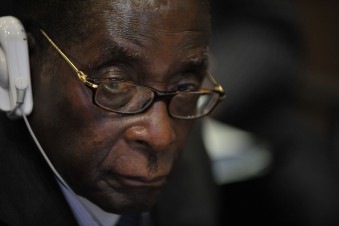 Over two years ago we reported that none other than Zimbabwe - best known in recent history for banknotes with many zeros in them - was bashing the US currency, and had aligned itself with the Chinese Yuan. This culminated last month with the announcement by Zimbabwe’s central bank that it would accept the Chinese yuan and three other Asian currencies as legal tender as economic relations have improved in recent years. "Trade and investment ties between Zimbabwe, China, India, Japan and Australia have grown appreciably," said Charity Dhliwayo, acting governor of the Reserve Bank of Zimbabwe.

It accepts the US dollar and the South African rand as the main legal tender. Their use has helped to stabilise the economy after world-record inflation threw it into a tailspin.

Independent economist Chris Mugaga said the introduction of the Asian currencies would not make a huge difference to Zimbabwe’s struggling economy.

"It is Zimbabwe’s Look East Policy, which has forced this, and nothing else," he said.

And now, as a result of the "Look East Policy", we learn that China has just achieved what every ascendent superpower in preparation for "gunboat diplomacy" mode needs: a key strategic airforce base.

China is planning to set up a modern high-tech military base in the diamond-rich Marange fields, says a German-based website, Telescope News.

The news of the agreement to set up the first Chinese military airbase in Africa comes amid increasing bilateral cooperation between Zimbabwe and China – notably in mining, agriculture and preferential trade. China is the only country exempted from the indigenisation laws which force all foreign investors to cede 51% of their shareholding to carefully selected indigenous Zimbabweans.

The Marange story quoted unnamed military officials and a diplomat admitting knowledge of the plan to set up the base. Efforts to get a comment from the Zimbabwe Defence Forces were fruitless, as spokesperson Lt Col Alphios Makotore was consistently unavailable and did not respond to emails by the time of going to press.

The website speculated that China could be positioning itself for future “gunboat diplomacy” where its military presence would give it bargaining power against superpowers like the US. It would also be safeguarding its significant economic interests in Zimbabwe and the rest of Africa.

“Military officials in Zimbabwe said details of the airbase plan were sketchy and mostly classified due to the veil of secrecy around President Robert Mugabe’s relationship with China’s Red Army. A sizeable number of Chinese troops are reported to have their boots on the ground in the Marange diamond fields, which have since been cordoned off as a high level security zone,” said the publication.

It added that a senior Air Force of Zimbabwe (AFZ) officer based in Harare confirmed that there were rumours of the impending establishment of the airstrip as a “follow up to a military treaty signed between China and Zimbabwe in July 2005”.

Telescope News has made sensational claims in recent weeks, among them that Defence Minister and Zanu (PF) Secretary for Legal Affairs, Emmerson Mnangagwa, was secretly anointed by the military to succeed President Robert Mugabe.

It quoted a former Asian diplomat deployed to Zimbabwe for almost a decade as saying: “Haven’t you heard that Africa is the battlefield of tomorrow, today? As such in terms of geo-politics Zimbabwe is already a key battleground, for various competing powers. During my stay there, we heard about many military agreements being signed between the two countries.”

Chinese companies are heavily involved in diamond mining, in partnership with the Zimbabwe Government. They are believed to have constructed the airstrip at Marange that many suspect is being used to clandestinely haul diamonds to unknown destinations. It has sophisticated radar systems and ultra-modern facilities.

At this point expect to see a prompt, and unexpected, escalation in hostilities in southern Africa, most likely due to latent ethnic conflict of some kind (and brought back to the surface with the help of a few CIA dollars), which in turn will be the justification for US drones to begin operations in proximity to Zimbabwe to keep up with China's encroaching take over of Africa, now from the south.

Perhaps most interesting is the finding that Zimbabwe's president-cum-dictator, Robert Mugabe, so widely despised by the west, is in fact on China's payroll:

China is Zimbabwe’s biggest trading partner after South Africa and has strategic economic interests in many African countries to guarantee raw materials, job sources and markets for its huge population.

The new Chinese Ambassador to Zimbabwe, Lin Lin, recently said trade between the two countries last year exceeded the $1 billion mark. Yet Zimbabwe is only 26th on the list of China’s 58 biggest African trading partners.

The Asian country has supplied Zimbabwe with military hardware, including MIG jet fighters, tanks, armoured vehicles and rifles, since Independence.

In other words, while nobody was looking, China just took over one more nation without spilling a drop of blood. And now back to the regularly scheduled Crimean War part X.