Gordhan delivers pre-election budget that appeals to the poor

Category Budget
Finance minister Pravin Gordhan delivered a pre-election budget today that was little more than a roster of achievements by the ANC government over the last five years. 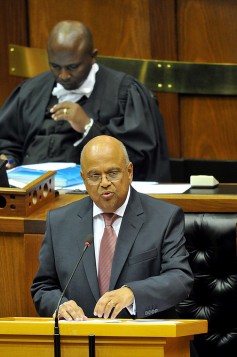 Government expects the economy to grow by 2,7% this year, rising to 3,5% in 2016. Gordhan placed some of the blame for the weak economy on international trends, and found something positive to say about the crashing rand - down 19% over the last year. This was, he said, beneficial for exporters, but it would make the cost of importing capital equipment more expensive.

Godhan expects the budget deficit to drop to 4% of GDP by early 2014, and continue its downward trajectory from there. On this note, I enclose a graph brought to my attention by Chris Becker, an economist with ETM Analytics in Johannesburg, showing what happens to emerging market currencies running deficits, versus those running surpluses. It's clear the 4% deficit has to be brought under control much faster if we are to avoid more slippage in the rand.

Gordhan also expects investment to increase by about 5% a year and the current account deficit to average 5.8% of GDP over the medium term, "while consumer price inflation will return to levels within the target band between 2015 and 2016."

Here is a nutshell is an outline of key elements of the budget:
Benefits to households
Support for businesses
Financial security
Job creation

Job creation is to be accelerated through a variety of measures:
Social assistance grants

The number of people eligible for grants is due to reach 16.5 million by 2016/17. The recent re-registration of grant recipients and the introduction of a new payment system have lowered the cost of administration. One million invalid beneficiaries were removed from the system. Social grants are meant for those who need them most.

Grant recipients will receive the following increases this year: