The 14 best insults of all time

The world’s best insults and put-downs

Winston Churchill was well known for his wit and searing put-downs, but what are the best insults of all time? Here's one list from British Pathe which is worthy of consideration. 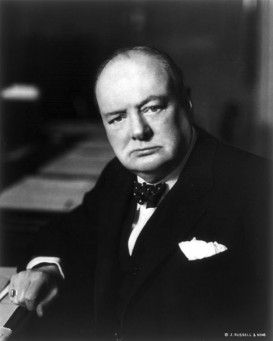 Valentino Liberace to a critic:

“Thank you for your very amusing review. After reading it I laughed all the way to the bank.”

“She loves nature, in spite of what it did to her.”

After a day's filming, actor John Barrymore (father of actor Drew Barrymore) and friends stopped off at a bar in Hollywood. Barrymore made his way to the bathroom and inadvertently entered the ladies' room. A woman entered the ladies to find Barrymore relieving himself. Shocked, she exclaimed,

The actor turned towards the woman, organ in hand, and boomed, "And so madam, is this".

The 30th President of the United States, Calvin Coolidge, was not nicknamed 'Silent Cal' for nothing. He was well known for being a man of few words. Whilst seated at a dinner party next to poet and satirist Dorothy Parker, Parker said to him,

"Mr. Coolidge, I've made a bet against a fellow who said it was impossible to get more than two words out of you."

When Coolidge died in 1933, Dorothy Parker remarked, "How can they tell?"

“Well at least he has found his true love – what a pity he can’t marry himself.”

"How many people work at the Vatican?"

The Pope replied, "About half".

The leader of the Indian independence movement paid a visit to England in 1931. Whilst there, a reporter shouted out,

"What do you think of Western civilization?"

Gandhi instantly replied, "I think it would be a good idea".

Lady Nancy Astor: "Winston, if you were my husband, I'd put poison in your coffee."

Winston Churchill: "Nancy, if you were my wife, I'd drink it."

“Some of my best leading men have been dogs and horses.”

Playwright Noel Coward bumped in to his old friend novelist Edna Ferber who was wearing one of her tailored suits. Coward looked her over and said,

Ferber looked Coward over and said, "So do you."

"What is my best side Mr Hitchcock?"

Hitchcock dryly responded, "You're sitting on it, my dear."

During a long-running feud between author Clare Boothe Luce and poet Dorothy Parker, Mrs. Luce held the door open for Mrs. Parker to walk through and said,

Mrs. Parker walked through and said, "Pearls before swine."

Bessie Braddock:"Winston, you are drunk, and what's more you are disgustingly drunk. "

When the Prime Minister of Canada, Pierre Trudeau heard that President Richard Nixon had called him an "asshole", Trudeau responded,