It's time to fire the minister of agriculture and fisheries

The DA has called for Tina Joemat-Pettersson's head, and the public protector wants Jacob Zuma to act against the agriculture and fisheries minister for maladministration, improper conduct and wasteful expenditure, writes Chris Barron. 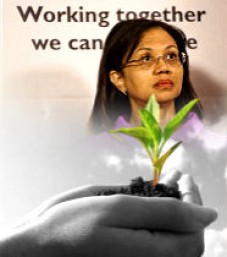 The public protector has recommended that President Jacob Zuma take action against his agriculture and fisheries minister, Tina Joemat-Pettersson, for maladministration, improper conduct and wasteful expenditure — and this week the Democratic Alliance called on him to fire her.

It is not hard to see why. Since being appointed by Zuma in 2009, the 50-year-old former teacher and Northern Cape MEC has had a disastrous effect on her department. Senior staff have found her impossible to work with and have left or been suspended in droves.

She screams at and overrules her experts if they dare suggest that an idea is not feasible. She has had no fewer than seven acting or permanent directors-general.

She blithely ignores protocols adopted by the cabinet when it suits her. A deputy director-general was appointed by her without the post being advertised or the required interviews being conducted. After the DA asked the Public Service Commission to investigate, the appointed person was “redeployed” to the KwaZulu-Natal housing department.

Joemat-Pettersson has been blamed for appointing incompetents to lead the Fisheries Department, most of them on a temporary basis. Since 2010, there have been more than 12 acting deputy director-generals. These are people who have the fate of South Africa’s R5bn-a-year fisheries industry in their hands, and not one of them, according to a former chief director of fisheries, Shaheen Moolla, has been “remotely qualified”.

The latest is acting deputy director-general Desmond Stevens, leader of the Umkhonto weSizwe Veterans’ Association in the Western Cape, who oversaw the recent chaotic and bitterly contested allocation of line-fishing permits.

Joemat-Pettersson’s extremely grudging appearances before the agriculture and fisheries parliamentary committee have been characterised by petulance, rudeness and a refusal to answer questions. Last year, she blamed the committee for her failures. An ANC member was so incensed that he called her a “liar”. The chairman had to step in and ask her to stop screaming at DA MP Annette Steyn.

Most notoriously, in 2011 she awarded an R800m tender to Sekunjalo, headed by her friend, benefactor and loud ANC loyalist Iqbal Survé, to manage and operate the department’s fleet of research and patrol vessels, despite failing to get Treasury approval and in flagrant disregard for legal and forensic audit opinions.

She prematurely announced Sekunjalo as the winner of the bid just before its year-end financial report. Predictably, its share price went up sharply in response.

Public pressure and the threat of legal action by losing bidder Smit Amandla, which had been managing the fleet efficiently for years, forced Joemat-Pettersson to withdraw the tender, leaving no one to operate the research and patrol vessels. Three months later, she handed the fleet to the South African Navy, although the public protector, called on by the DA to investigate the disaster, asked her not to because the navy did not have the expertise to manage it.

Joemat-Pettersson, who said she had lost faith in the public protector after Thuli Madonsela found she had violated the executive ethics code and “displayed a blank-cheque attitude towards public funds” for billing the department for her family’s holiday travel expenses, ignored her.

In December, Madonsela found Joemat-Pettersson guilty of maladministration, improper conduct and wasteful expenditure in the awarding of the tender to Sekunjalo.

She also found that the minister had interfered in the investigation in violation of the Public Protector Act. The DA has reported her to the parliamentary ethics committee and laid a criminal charge. If found guilty, she could face a stiff fine or jail.

Nobody has been able to quantify the financial cost to the South African fisheries industry of Joemat-Pettersson’s apparent dereliction of duty. But it has been substantial and will be felt for years.

Most of the fleet is inoperable because of a lack of maintenance.

The repair bill so far is estimated to be more than R30m and counting.

For 20 months, our sea space was not patrolled, leaving it open to massive poaching by international syndicates and large companies with all the resources necessary to decimate our fishing stocks.

To get some idea of the monetary cost, the US Supreme Court found that poaching by one company of our West Coast rock lobster in the late 1990s had caused $60m in damage. Another indication is that when two vessels went back to sea late in November last year, they almost immediately confiscated 10 ships with illegal catches.

The department says patrolling has happened, but the majority of the fleet is still not back at sea and Moolla estimates that “we’re probably not seeing even 50 days of patrolling a year”. Ideally, there should be patrols for at least 200 days a year.

As for the research that is critical to a sustainable industry, it has “essentially been abandoned”, says Moolla. The industry has been doing some research itself to avoid losing the accreditation necessary to continue exporting to Europe. But its boats are neither properly equipped nor manned for this.

In the absence of proper research, the local industry is likely to lose its eco-labels and lucrative overseas markets, says the DA’s Pieter van Dalen.

“The department has begged the Marine Stewardship Council not to remove our eco-labels because the poor will suffer, but they can only do that for so long,” he says.

As for the recent permit allocation disaster, Moolla says he has “never seen this level of blatant political nepotism”. He says when he was former minister Valli Moosa’s legal adviser and then-chief director under Joemat-Pettersson’s predecessor, Marthinus van Schalkwyk, the department was under “an incredible amount of political pressure” to hand out quotas to ANC bigwigs.

Judging by the evidence of cronyism in the latest allocation, the department under Joemat-Pettersson is offering less resistance than it should. She, of course, calls it transformation. Others call it “toadying”, and it could be the reason Zuma has held on to her in spite of copious evidence that she is unfit for the job.

Joemat-Pettersson says she created 54,000 jobs in the agricultural sector in the first three months of last year. But Steyn, the DA’s agriculture spokeswoman, says they are seasonal, not permanent, jobs and happen every year in the picking season with no help from the minister.

This week, the minister countered the public protector’s finding of wasteful expenditure, saying her department had received five unqualified audits. But examples are many.

Ten days before the Western Cape farm protests began last year, she handed R4.6m to the Black Association of Wine and Spirits Industry, which supposedly represents the pickers. There was no business plan saying how it would be spent and it was never satisfactorily accounted for.

She has pumped R34m into projects on a state farm in the Eastern Cape bought as a model training school for small-scale farmers, but there has been no proper management of the money or the projects, which have almost collapsed.

Her “Zero Hunger” programme has come to nought, with allegations that she depleted its budget to give R800m to an NGO run by Zuma’s cousin.

She grandstands about food security, but uses projects with names such as “Eradicate Hunger”, heavily funded by the private sector, relentlessly to plug the ANC.

The reality is that when Joemat-Pettersson became minister, South Africa was a net exporter of food. Last year, according to some agricultural economists, the country became a net importer.

• This article was first published in Sunday Times: Business Times