Sports and recreation minister Fikile Mbalula has given Bafana Bafana a tongue-lashing for their recent capitulation to Nigeria. But as Gareth van Onselen points out in Business Day, he could do with a dose of his own advice. 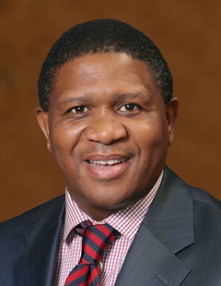 On January 20 2014, as if struck by a bolt of truth lightning, Sport and Recreation Minister Fikile Mbalula suddenly felt compelled, Tourette’s-like, to blurt out a series of truths. How refreshing. Let’s have some more of whatever it is he’s on. Give the whole Cabinet a drink from his cup. That stuff is the real deal.

Mbalula told a press conference after Bafana Bafana’s latest capitulation, to Nigeria: "Last night (Sunday) we saw a bunch of losers — unbearable, useless individuals. We must never wake up to this. We indeed have a crisis of monumental proportions, this tournament has proved. That mediocrity we saw yesterday is disgraceful.

"In Africa we have won nothing — we are the laughing stock. Even Madiba magic would not have worked. This generation of players we must forget. It is back to the drawing board. Safa (the South African Football Association) must draw up a detailed plan. They must wake up and smell the coffee."

Agree with him or not, that’s about as forthright as politics gets.

First, though, someone should have a more detailed conversation with Mbalula about his own performance because, if Bafana Bafana are a "bunch of losers", he is the San Marino of sport ministers. San Marino, if you haven’t heard of them — which would be understandable given their record — are the worst football team in the world. They won a game once, 1-0, back in 2004. But that was a friendly. Since then it’s been tough going.

South Africa really shouldn’t have a sport minister at all. It’s like the kind of position you invent on a school playground, once all the kids have chosen sides, to give the last remaining, most useless prospect something to do so he can feel part of the team. But we do have one. So, how has he been doing?

Well, he presided over the meltdown of the Gauteng Cricket Board, which culminated in a commission of inquiry. World Cup stadiums such as the one in Mbombela are already falling apart. The Border Rugby Union this week reported it was bankrupt. Athletics SA is bankrupt and under administration, and our Olympic team get no real money and continue to perform far below their potential.

How little money, you ask? Mbalula has spent R110m on awards ceremonies in two years; the three-year Olympic budget is R25m.

There is more. Swimming SA holds meetings in green swimming pools. Boxing SA is corrupt, broken and bankrupt. Cricket SA’s relationship with India and the International Cricket Council has melted down into goo and we are being permanently isolated from its new power-making structure. The Soweto Marathon has collapsed. Rowing SA has to rent boats out of its own pocket. And, of course, there is Safa, an institution more chaotic, mediocre and self-destructive than the African National Congress (ANC) Youth League itself. Mbalula would know.

That, by the way, is a kind description. If one had to lay out all the numbers, the full extent of the crisis facing the various sporting administrations would read like an Eskom balance sheet, just before the lights went out.

Speaking of the ANC Youth League, why is it that the president felt compelled to include Mbalula in his Cabinet at all? He has no discernable skills, no real-world experience and the ego the size of a small planet, albeit a lifeless one. He was the president of a failed youth organisation. What right does that give him to manage public money?

It was nice of President Jacob Zuma to throw the man a bone — the national budget takes sport no more seriously than it does stationery — but that doesn’t mean we have to have an "unbearably useless individual", to use Mbalula’s own words, managing it all. Let him hand out T-shirts at a rally, by all means, but let’s keep actual governing for those who know a thing or two about it.

Instead we have a petty, opportunistic and hypocritical man whose massive ego has caused him to detach entirely from his own messy reality and pontificate to the world about excellence and outcomes. It is a ridiculous situation. San Marino don’t go round labelling other teams "losers". They have a sense of perspective. Mbalula has none.

That is well illustrated by a story in The Times this week. Mbalula, who seems obsessed with celebrities from Beyoncé to Bolt, spent much time fawning and gushing over Floyd "Money" Mayweather, the undefeated five-division boxing champion he brought to South Africa at a cost he is not disclosing.

As part of the fanfare, Mbalula visited the Dube Boys Club in Soweto, a famous school for upcoming boxing talent, only to announce, out the blue, that it would be renamed after Baby Jake Matlala. Like some sort of king, he decreed it. He never consulted the owners of the club. He never consulted the family. He didn’t even suggest a proposal. He just decided.

Owner Steve Masike, to his credit, was having none of it: "If this is about scoring political points, then it shouldn’t be at the expense of the people’s gym. Mbalula has insulted us. Who is Matlala — a boy who trained in this gym by default just because his father trained here? We cannot fold our arms and allow Mbalula to wish away the legacy of this gym."

This is a minister out of control. It is amazing what a small vestige of power can do to the insecure and egotistical. He said after the Bafana Bafana loss: "I saw people lining up after the game to greet them ... I won’t greet them, I didn’t even call them." As if anyone cares.

There might well be such a thing as "Madiba magic", just as surely as there is such a thing as "Mbalula mediocrity". You’d be brave to shake his hand dressed in anything less than a lead-lined radioactivity suit.

There is something schizophrenic about Mbalula. You might recall, after Bafana Bafana beat Angola 2-0 in the 2013 African Nations Cup, he also held a press conference, this time to sing the team’s praises. And boy did he sing, like an opera singer on crack. One has to read the statement in full to appreciate the madness of it all but it contained lines such as: "We stand here this morning as a proud and confident nation imbued by the resounding thrashing, walloping and gregarious defeat of the Angolan national football team in eThekwini by the our astonishing and call-heading warriors Bafana Bafana."

Back then, all of one year ago, there was no room for naysaying or negativity. "There is neither room nor place for prophets of doom and unpatriotic Johnny-come-latelies in our national fibre, constitution and make-up," he said.