Mandela made South Africa great for a time

Category Africa
The news of Nelson Mandela’s passing has touched the world. Once in a generation, a man appears who embodies greatness. Someone who, despite every reason to hate, chooses the path of love and reconciliation. Here was a man who landslided the ANC into power in 1994 and then handed over the reins of power four years later, proving to the world that democracy and accountability were alive and well in Africa. 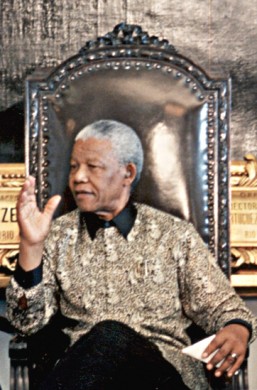 Whatever one may think of the ANC today, one must marvel at its organisational reach and durability. The Mandela legend was born before he died and will carry the African National Congress (ANC) to victory once again next year.

Mandela flirted with communism off and on over the years. Initially, he could not reconcile its rejection of Christianity with his own core beliefs, but later warmed to the teachings of Karl Marx, Friedrich Engels and Josef Stalin and their imagined sympathy for the poor and the downtrodden. Mandela was more concentrated on promoting racial than class equality, though he was persuaded of the virtues of communism as apartheid intensified following the ascendancy of the National Party in 1948.

By the early 1960s, the European colonial project was starting to wind down. This left Rhodesia, Mozambique, Angola and South Africa as the last outposts of white supremacy. The apartheid machine belched out more than 60 laws to keep races separate, and nine more to suppress rebellion. Mandela’s embrace of Mahatma Ghandi’s non-violent revolution was going nowhere, other than to earn him several relatively brief sojourns in prison in the 1950s, one of them for “statutory communism” under the Suppression of Communism Act.

Mandela had come to the conclusion that only violent revolution would dislodge the apartheid regime after the ANC’s unsuccessful attempt to prevent the ethnic cleansing of the black township of Sophiatown, Johannesburg, in 1955. He advocated the burning of the pass books blacks were required to carry, just as Ghandi had done in South Africa some 50 years previously. He was clearly headed for trouble, and it arrived with his arrest in 1962 and the subsequent Rivonia Treason Trial. Mandela and his co-accused were charged with four counts of sabotage and conspiracy to violently overthrow the government. He was found guilty and sentenced to life in prison, avoiding the death sentence the prosecution demanded.

All this is rather well documented, and publishers will no doubt feast on the Mandela legend for years to come.

Biographies of Mandela describe him as a “scientific socialist”, and “African nationalist” and other such labels. It’s true he harboured an abiding distrust of capitalism, but realised that it was the engine that kept the country afloat. Former finance minister Derek Keys, who served in Mandela’s first cabinet, described him as one of the most astonishing and caring leaders had had ever worked with (though he credited Mandela's predecessor FW de Klerk as the most effective leader, with the most incisive mind).

According to Keys, Mandela could not reconcile the fact that a nurse could earn just R2,000 ($200) a month while the CEO of a publicly listed company could earn R1 million ($100,000). In his mind, such disparities seemed to de-value the labours of ordinary people, even de-humanise them. Yet Mandela was not particularly ideological, at least in practice. He was more of a humanist, if we are to scratch around for labels. He went to extraordinary lengths to reconcile blacks and whites by encouraging the entire country to support the Springboks in the 1995 Rugby World Cup. He preached tolerance and forgiveness, often against the advice of his closest colleagues. He stood up to the bigots and trouble makers from whatever quarter they came, and no-one dared challenge him. This is the real Mandela legacy, and something the country and the world will remember him for. And, of course, the fact that he exited the political stage after just one term in office - something rarely seen in Africa.

He set up the Truth and Reconciliation Commission to investigate crimes under apartheid. It was a rather botched affair that should have been handled better. Much of the witness testimony was suspect and would hardly stand up in a court of law, but it was allowed anyway. The Commission was far less probing of crimes committed by the ANC both within South Africa and in exile - and there were plenty of these. Mandela also championed black economic empowerment (BEE) as a way to redistribute wealth. The intentions were pure, but the result is a mess, with a small coterie of politically-connected individuals joining the ranks of new billionaries, leaving the masses pretty much where they were to begin with. Had Mandela studied Von Mises and Hayek rather than Marx, he might have decided on a genuine free market solution to the problem of poverty and racial injustice.

The ANC under President Zuma has squandered the Mandela coinage, what with repeated revelations of corruption and cronyism. It is indeed a long fall from Mandela to here. Perhaps the ruling party will attempt to rekindle the Mandela magic in the months to come, and recalibrate its compass in memory of the legend.

We South Africans of this generation were witness to something special.