Category Constitution
The e-toll war stepped up a decibel or two over the last week with news that government planned to introduce e-tolls from the beginning of December. Not since the death of apartheid in 1994 has this government faced such committed opposition to a policy plan. 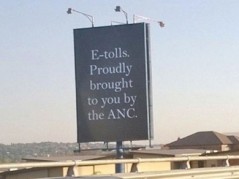 A fusillade of court challenges are underway or planned, all seeking to have the e-toll legislation signed by President Zuma in September declared unconstitutional.

The Democratic Alliance (DA) will launch a challenge in the South Gauteng High Court, while a similar challenge has already been launched by the Freedom Front Plus, agricultural union TAU SA, and the National Taxpayers' Association. Head of the DA in Gauteng, Mmusi Maimane, has made e-tolls a key campaign issue ahead of the 2014 elections.

“We continue to be amazed that our Government, who are supposed to represent the best interests of its people, ignores the unrelenting opposition to e-toll from unions, church groups, broad-based civil organisations, all opposition political parties and the public at large,” says head of OUTA, Wayne Duvenage.

Rights group AfriForum said it would not register for e-tolls and encouraged other organisations to act likewise. “If the public accepts e-tolling, an expensive system with high admin costs, without protest, the government will be able to launch similar projects without considering more cost-effective recoupment methods,” said Kallie Kriel, head of AfriForum.

Transport minister Dipuo Peters, and SA National Roads Agency (Sanral) chief executive Nazir Alli, decided it was time to get tough on the naysayers who argue the e-toll system is unworkable and will bankrupt itself. So far, more than 700,000 e-tags have been sold according to Alli, and those who do not pay their e-tolls can expect short shrift from the courts. He went on to say that the court systems will be able to handle the traffic generated by mass civil disobedience.

This, of course, is complete bluff. The courts will be chock full of cases challenging the legality of a system that was bulldozed through parliament by a government that failed to investigate the alternative payment methods – such as the fuel levy, or taxation – or, indeed, alternative and viable transport systems. The e-tolls will cost more than R670 million a year just in collection fees, and most of this will go offshore.

AfriForum’s Kriel is right. If government can get away with e-tolls, it will try to do the same when the next grandiose project comes along.

Government had better have a Plan B in place, because South Africans are rediscovering their appetite for civil disobedience. “We are also encouraged to see continued efforts from all sectors of society in opposition to e-tolls which ultimately denounces a policy which is not in the best interest of the people,” says Duvenage.

Quite apart from growing public resistance and new court challenges to e-tolling, the legality of e-tolls has yet to be determined. OUTA believes there will be possibly hundreds of legal challenges against the system by those summonsed for not paying e-tolls. “Given the current economic climate, financial pressure on households and high levels of unemployment, the introduction of e-tolls could well be the tipping point for citizens’ frustrations, especially in this case where society feels vindicated and empowered in their decision not to participate in this unjust policy,” says OUTA.

It didn’t help the government’s case that around about the time it announced the launch of e-tolls, the Auditor General came out with a report detailing R30,8 billion in government waste, 24% higher than the previous year’s R24,8 billion. One cannot but notice that this wastage more than covers the R18 billion road construction costs for the freeway project.

Economists have noted that these wastage figures vastly understate the actual cost to the economy. If the full extent of corruption and maladministration is accounted for, the cost to the economy is closer to R100 billion. But this is trifling when you are spending other people’s money.

Minister of Public Service and Administration, Lindiwe Sisulu, says new systems are being put in place to bring the guilty public servants to book. Actually, they should be fired or jailed, which is what happens when you screw up or steal in the private sector. The public sector is far more forgiving.

Where is the voice of big business when it comes to e-tolls? Silent, as usual. Their staff and customers will have to pay these e-tolls, and perhaps spend a little less on food each month, or maybe pull a child from school to save a few hundred rands, but big business remains spineless in the face of this government.

Perhaps when one or two business raise their voices in protest, a few others will be encouraged to do likewise. As OUTA points out, the continued lack of loud and robust condemnation by big business in effect condones Government’s behaviour. “Business should be filing complaints with the Institute for Accountability, the Public Protector, at Nedlac or directly with the authorities and other bodies to bring about a drastic reversal of this situation.  By failing to do so, business is falling short of their duties to the citizens of this country.  Their silence and lack of strong action against Government is in effect, becoming part of the problem.”

Mass civil disobedience over e-tolls could sink the ship