The de-Americanisation of the world has begun

Category International
Asia Times correspondent Pepe Escobar argues that the de-Americanisation of the world has begun, accelerated by the current "shut-down" of the US government and the shifting of financial risks overseas. China is no longer prepared to keep a low profile, and the days of US hegemony are fast drawing to a close. 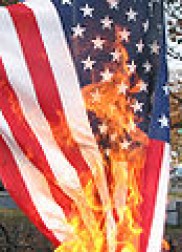 This is it. China has had enough. The (diplomatic) gloves are off. It's time to build a "de-Americanised" world. It's time for a "new international reserve currency" to replace the US dollar.

It's all here, in a Xinhua editorial, straight from the dragon's mouth. And the year is only 2013. Fasten your seat belts - and that applies especially to the Washington elites. It's gonna be a bumpy ride.

Long gone are the Deng Xiaoping days of "keeping a low profile". The Xinhua editorial summarizes the straw that broke the dragon's back - the current US shutdown. After the Wall Street-provoked financial crisis, after the war on Iraq, a "befuddled world", and not only China, wants change.

This paragraph couldn't be more graphic:

Instead of honoring its duties as a responsible leading power, a self-serving Washington has abused its superpower status and introduced even more chaos into the world by shifting financial risks overseas, instigating regional tensions amid territorial disputes, and fighting unwarranted wars under the cover of outright lies.

The solution, for Beijing, is to "de-Americanise" the current geopolitical equation - starting with more say in the International Monetary Fund and World Bank for emerging economies and the developing world, leading to a "new international reserve currency that is to be created to replace the dominant US dollar".

Note that Beijing is not advocating completely smashing the Bretton Woods system - at least for now, but it is for having more deciding power. Sounds reasonable, considering that China holds slightly more weight inside the IMF than Italy. IMF "reform" - sort of - has been going on since 2010, but Washington, unsurprisingly, has vetoed anything substantial.

As for the move away from the US dollar, it's also already on, in varying degrees of speed, especially concerning trade amongst the BRICS group of emerging powers (Brazil, Russia, India, China and South Africa), which is now overwhelmingly in their respective currencies. The US dollar is slowly but surely being replaced by a basket of currencies.

"De-Americanization" is also already on. Take last week's Chinese trade charm offensive across Southeast Asia, which is incisively leaning towards even more action with their top commercial partner, China. Chinese President Xi Jinping clinched an array of deals with Indonesia, Malaysia and also Australia, only a few weeks after clinching another array of deals with the Central Asian "stans".

Chinese commitment to improve the Iron Silk Road reached fever pitch, with shares of Chinese rail companies going through the roof amid the prospect of a high-speed rail link with and through Thailand actually materializing. In Vietnam, Chinese Premier Li Keqiang sealed an understanding that two country's territorial quarrels in the South China Sea would not interfere with even more business. Take that, "pivoting" to Asia.

All aboard the petro-yuan

Everyone knows Beijing holds Himalayas of US Treasury bonds - courtesy of those massive trade surpluses accumulated over the past three decades plus an official policy of keeping the yuan appreciating very slowly, yet surely.

At the same time, Beijing has been acting. The yuan is also slowly but surely becoming more convertible in international markets. (Just last week, the European Central Bank and the People?s Bank of China agreed to set up a US$45-$57 billion currency swap line that will add to the yuan's international strength and improve access to trade finance in the euro area.)

The unofficial date for full yuan convertibility could fall anywhere between 2017 and 2020. The target is clear; move away from piling up US debt, which implies, in the long run, Beijing removing itself from this market - and thus making it way more costly for the US to borrow. The collective leadership in Beijing has already made up its mind about it, and is acting accordingly.

The move towards a full convertible yuan is as inexorable as the BRICS move towards a basket of currencies progressively replacing the US dollar as a reserve currency. Until, further on down the road, the real cataclysmic event materializes; the advent of the petroyuan - destined to surpass the petrodollar once the Gulf petro-monarchies see which way the historical winds are blowing. Then we will enter a completely different geopolitical ball game.

We may be a long way away, but what is certain is that Deng Xiaoping's famous set of instructions is being progressively discarded; "Observe calmly; secure our position; cope with affairs calmly; hide our capacities and bide our time; be good at maintaining a low profile; and never claim leadership."

A mix of caution and deception, grounded on China's historical confidence and taking into consideration serious long-term ambition, this was classic Sun Tzu. So far, Beijing was laying low; letting the adversary commit fatal mistakes (and what a collection of multi-trillion-dollar mistakes... ); and accumulating "capital".

Beijing has listened to Dylan (with Mandarin subtitles?) and concluded yes, the times they-are-a-changing. With no foreseeable social, economic and political progress - the shutdown is just another graphic illustration, if any was needed - the US slide is as inexorable as China, bit by bit, spreading its wings to master 21st century post-modernity.

Make no mistake; the Washington elites will fight it like the ultimate plague. Still, Antonio Gramsci's intuition must now be upgraded; the old order has died, and the new one is one step closer to being born.