South Africans have a poor view of the court system

Research by the Human Sciences Research Council (HSRC) showing that only half of South Africans believe the courts are fair and impartial is perhaps not that alarming in itself, as this sort of level of distrust in the justice system is common elsewhere in the world, according to an editorial in Business Day. 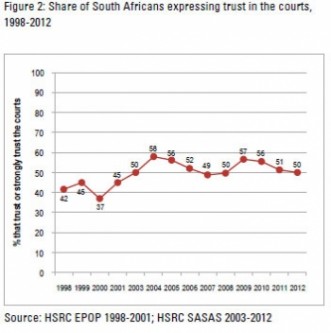 What is worrying is that those most disenchanted with the courts are young and socially disadvantaged — in other words, the bulk of South Africa’s population. Their negativity, the HSRC warns, could have a "damaging effect on the legitimacy of the courts" and the lack of confidence in them leaves little room for complacency.

Unlike other branches of the government, the courts do not have a police force or money to enforce their rulings. The system relies on the credibility of the institution encouraging the public to comply with and respect the rule of the law and court decisions because they believe in their fairness and impartiality. It requires the state to respect its judgments and to act on its behalf, such as sending those who have been convicted after a fair trial to jail, or forcing people on the losing side of civil claims to pay up.

If a critical mass of people do not believe the courts are impartial, the whole system wobbles. To protect this independence and legitimacy, it is critical that the state be seen to support and uphold court decisions and respect judicial independence, even when decisions go against it. Yet, in many cases, it is our politicians themselves who lead the assault on this independence, labelling the courts as opposition forces or impediments to transformation, or ignoring judgments.

Government and political parties have been warned on a number of occasions that their undermining of the country’s legal system will have negative consequences for our democracy. The lack of belief in our courts emerging among young people in particular is partly a consequence of this behaviour.

A trusted and independent judiciary is an essential pillar of liberty. Without it, the state loses a tool to resolve disputes and administer the law impartially between individuals and between citizens and public authorities. Without a fair and trusted legal system, citizens risk their rights and freedoms.

That is not to say that the courts are above criticism. But when they are brought under scrutiny, this should be done with great caution.

Highlights of the report: