Another absurd report from the Public Protector 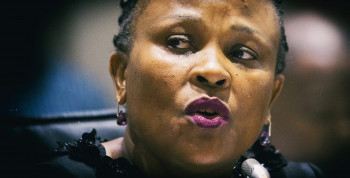 Public Protector advocate Busisiwe Mkhwebane has had a rough time since taking office. First, she ordered Parliament to amend the Constitution – despite the fact that she had no power to do so. Then a High Court found that she was biased and lacked impartiality, as well as being dishonest and incompetent, and ordered her personally to pay a part of the legal costs in a case brought against her. Now she has released a report on Helen Zille’s highly problematic tweets on colonialism that is so legally misguided that it is difficult to believe that a qualified lawyer could write it in good faith, says Pierre de Vos in Daily Maverick.

Of all the obnoxious things Helen Zille has tweeted in her life (remember her tweets on black people from the Eastern Cape being “refugees” in the Western Cape?), her tweets in which she preposterously attempted – among other things – to credit colonialism with bringing piped water to South Africans (except, of course, to all those black people it did not bring piped water to), were probably the most outrageous and politically self-destructive.

But now Public Protector Busisiwe Mkhwebane (pictured) has provided Zille with a gift. By writing a truly bizarre report on the tweets, the Public Protector has given Zille an easy political win. Some of us who have been highly critical of her tweets will now have to point out that the Public Protector’s report is a legal nonsense and that it will be declared irrational and set aside by the courts if taken on review. This will allow Zille to look reasonable and rational in contrast.

By issuing a report in which she purports to deal with Zille’s tweets, but does so in a manner that suggests she has little understanding of her own powers and lacks even a very basic knowledge of the Constitution, she has invited the public again to consider whether she is suitable to continue in her current position.

These are strong words, so let me explain why the report is – from a legal perspective – truly preposterous and why it will be found to be irrational and set aside by the courts if they are asked to do so.

“… prohibits statements which could provoke a certain public reaction, capable of stirring up racial violence. The reaction of the South African public towards the Premier’s tweets is indicative of the likelihood stirring up violence based on race and therefore in contravention of section 16(2)(b) of the Constitution”

There are three problems with this line of reasoning.

However, the Constitution does not bestow powers on the Public Protector to investigate breaches of provisions of the Bill of Rights. In the first instance, sections 184 and 187 empower other Chapter 9 institutions (the South African Human Rights Commission and the Commission for Gender Equality) to try and resolve human rights complaints.

As a second line of defence, the courts – and ultimately the Constitutional Court – are empowered to adjudicate on breaches of the various provisions of the Bill of Rights. By purporting to rule on human rights abuses the Public Protector is in breach of the separation of powers doctrine, arrogating to herself a power exercised by the judiciary.

Making a finding that Zille’s tweets infringed on section 16(2)(b) of the Constitution suggests that the Public Protector lacks even a basic knowledge of Constitutional Law (if one assumes that she wrote her report in good faith, of course, and did not deliberately misconstrue the provisions of the Bill of Rights).

Section 16(2) therefore defines the boundaries beyond which the right to freedom of expression does not extend. While section 16(2) allows the legislature to limit expression excluded from protection by section 16(2), it does not itself “prohibit” such expression. The legislature has done so by passing the Promotion of Equality and Prevention of Unfair Discrimination Act which regulates forms of “hate speech” in section 10, read with section 12.

To hold – as the Public Protector did in her report on Zille’s tweets – that section 16(2)(b) prohibits speech is a bit like holding that a Beyoncé song prohibits racism. Now, Beyoncé might be a beautiful symbol of a strong black woman defying racial prejudice, but it would be preposterous for the Public Protector to rule that one of Beyoncé’s songs legally prohibits Zille from tweeting what she did. 69

There is also a third problem, namely that the Public Protector found that section 16(2)(b) prohibited Zille’s tweet because it constituted “incitement of imminent violence”. But section 16(2)(c) does nothing of the sort. This section refers to statements made by an individual spurring other people on to commit violence. For example, a politician who tells a crowd: “I implore you to go at once and murder X” would be inciting imminent violence. So would a criminal who tells an accomplice to finish off the person they kidnapped. But saying something inflammatory that might cause another person to resort to criminal violence goes far beyond the scope of section 16(2)(b).

The report also contains a finding that the tweet violated section 10 of the Bill of Rights (which guarantees the human dignity of everyone), but does not provide any reasons for this finding. There is no analysis of what the scope and content of section 10 is. Surprisingly, the report does not mention Dawood and Another v Minister of Home Affairs and Others which is the seminal Constitutional Court judgment on section 10. More surprising perhaps is that the report provides no argument or justification to support the finding that a breach of section 10 occurred.