The end of Mugabe and the rise of Emmerson Mnangagwa 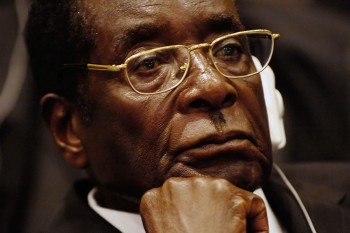 A week ago Eddie Cross, an opposition member of parliament in Zimbabwe, predicted that the end of Robert Mugabe's reign in Zimbabwe. In this article he outlines the forces at work in that troubled country, as the military takes control of the political structures and holds the 93 year-old president under virtual house arrest while ostensibly battling "criminal elements" trying to sieze control. Who will replace Mugabe? Enter Emmerson Mnangagwa, fired last week by Mugabe and now invited back to the country. Or, as Eddie Cross suggests, will this open the door to free and fair elections next year?


In 1980, a man called Robert Gabriel Mugabe took over as the Prime Minister of what was to be called Zimbabwe. The event called to a close the Rhodesian era which had started in 1893 and lasted until the country gained its independence from the United Kingdom in April 1980. Previous national leaders as Prime Minister had held power for many years – starting with Godfrey Huggins who was the longest serving Prime Minister in the Commonwealth. He passed power to a man called Ian Douglas Smith who dominated national life for 17 years.

Mr. Mugabe has held absolute power for 37 years since 1980, this is longer than Huggins and double the period dominated by Ian Smith of UDI fame. In the end all such periods of “strong man” government come to an end. Age plays a role, but it can also come about as a result of political, economic and international pressure. In the case of the end of the era dominated by Mr. Mugabe, it is a combination of many factors including his advancing age (93), poor health and pressure from his own Party, the regional and international community and the collapse of the economy. The only outstanding question now – is when, how and to whom will this transition take place.

In a strange way the end of the Mugabe era started in 2013 when his Party, supported by the machinery of the State, won a clear majority in Parliament and he secured another 5-year term in power. This electoral victory, like so many since 1980, was achieved by means that bore little resemblance to democracy. The mastermind behind this was the then Minister of Defence and Chairman of the Joint Operations Command (the JOC), Emmerson Mnangagwa. He fully expected to be rewarded for his efforts but instead the President turned to the Vice President Joice Mujuru who was then involved in the selection and appointment of the new Cabinet.

Mnangagwa is called “the Crocodile” and his response was exactly what a crocodile would do – he sank to the bottom of the river and waited and after two years he mounted a fast attack on the Vice President who was displaced and fired with the help of a new political player called Grace Mugabe. Grace, once she had a taste of political power could not be sent back into her bottle and instead became an implacable enemy of the new Vice President, Mnangagwa, who had succeeded the previous VP, Joice Mujuru. She recognised immediately that he was her main competitor for power and was committed to taking her husband’s place when the inevitable happened.

This power play has steadily intensified until last weekend when the President and his wife launched a sudden and final attack on Mnangagwa and on Monday he was fired. For those of us who are watching events closely we were not surprised by the action, but by its speed and ruthlessness. After half a century of loyal service and 37 years of continual membership of Cabinet, Mnangagwa was brushed aside and on the Wednesday following, threatened with death. He fled, first to Mozambique and then to China.

We have to ask what is left of Zanu PF? The unity accord, with Zapu, established by force in 1987, is in tatters, the Party structures in Mashonaland East and Central and now Midlands and Masvingo are divided and dispirited. The Matabeleland Provinces remain hostile territory for Zanu and the Eastern Province has challenges. This leaves Mr. Mugabe and his South African born wife with his home Province of Mashonaland West and Zvimba.

More menacing for the Mugabe’s is the fact that the State machinery that he has nurtured and controlled so effectively since 1980, is now deeply and probably irreconcilably divided. The mastermind of the 2013 victory and key organiser is in exile and has already started sniping at the President from the sidelines. Elections are likely to be held in April 2018 and this leaves 5 months for the remaining team at the top table in Harare to organise the Party for the elections.

It now seems unlikely that there will be any violent or physical response by the Mnangagwa group to his dismissal. However, the immediate reaction of one of the major groups of the Veterans of the Liberation War, has already given us a glimpse of what that response might be. The Vets have announced their formal withdrawal of support for Mr. Mugabe as the Presidential candidate of Zanu PF. They did not indicate who they were switching support to and one of the first statements attributed to the former Vice President said quite clearly that in his view the Presidency was not the exclusive property of the Gushungu Clan.

To me the most likely response of these powerful elements in our society will be to switch sides in the 2018 elections and to support, for the first time, a free and fair election. Already some significant leaders have called for a national front to confront the Zanu PF election team in the field. I suspect that the Mnangagwa team has concluded that if they cannot persuade the Old Man to step down or formulate a rational succession plan to new leadership that can take the Country forward then “let’s have a free and fair election” and let that process sweep the country clean of regressive elements. I know that they feel that only a free election can create a government that can command the international support essential to economic stabilization and recovery.

For the country, the key question is therefore who is going stand against Mr. Mugabe (or Mrs. Mugabe) in 2018? At present we have a confusing proliferation of opposition Parties – some of which I suspect have been created for this purpose. We also have a dozen Presidential hopefuls. What we need right now is not just a credible Presidential candidate who can solve the critical problems of the country going forward but a whole team of competent and experienced people who can pick up the pieces after the defeat of Zanu PF in 2018.

There is no doubt in my mind that only Morgan Tsvangirai has the necessary grassroots support in the country to unseat the Mugabe dynasty. In addition, I know that he has been convinced for a number of years that the country needs a national government which can handle the transition to 2023 and perhaps beyond. The question in everyone’s mind is can his health stand up to a tough campaign and then the task of taking charge of national affairs. He is a very resilient character who has survived several attempts on his life, been at the very center of the storm that has engulfed Zimbabwe since 1997 and has not just survived attempts to unseat him but maintained his grip on the Movement for Democratic Change which he founded in 1999.

The storm he faces now is one that many have faced in the past – that of a body that is trying to pull him down. He has been fighting this battle for almost a year and will be back into the country from his latest skirmish in South Africa, next week.

Those of us who are in the leadership of the MDC Alliance are going to have sit down with him and make the decisions that will determine events in Zimbabwe for the next six months and perhaps then for many years. The future of Zimbabwe is in our hands. Those closest to him say he is ready and able to lead and we must accept that – remember that Mrs. Mugabe had the same problem before Mr. Tsvangirai and seems to be handling things very well. I have friends who have also been through the same experience and are now able to live normally.

But for the Mugabe dynasty – this is the end, while for the rest of us – the dawn is starting to emerge in the new day that lies ahead of us.