Pace of state capture picking up 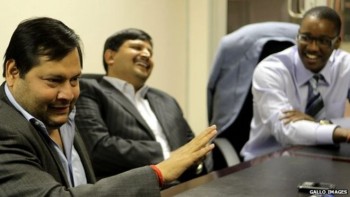 The Guptas might be on the back foot, but the project to capture the state is proceeding apace. Over the past few weeks, the looters have been emboldened again.


Mineral Resources Minister Mosebenzi Zwane has embarked on a far-reaching redeployment of regional managers. These are not minor positions: the regional offices are where applications for exploration and mining rights are lodged.

Energy Minister Mmamoloko Kubayi has had "informal talks" with Finance Minister Malusi Gigaba and says she plans to bring a new nuclear spend plan to the Cabinet.

Public Enterprises Minister Lynne Brown has reshuffled the deck chairs among the compromised executive of Eskom, while the blatant thieving continues and an incompetent and discredited chair of the board looks on.

By demanding a list of all beneficiaries of loans made by the Public Investment Corporation, Finance Minister Malusi Gigaba has effectively thrown mud at corporations in the hope that something will stick.

Gigaba has also been talking to acting chief procurement officer Willie Mathebula, about measures that will reduce the oversight power of the Treasury. The proposal under discussion, reported on by the City Press, is that government departments will no longer have to ask the Treasury for permission to deviate from a contract.

Once a tender has been adjudicated, it could thereafter be prolonged, adjusted and added to, as long as the head of the department believes it is justified.

In practice, it will amount to the abandonment of the Public Finance Management Act.

To quote some relevant recent examples: if permission for deviations was not required then Eskom could extend its 2013 contract to buy chairs for R72m by another R24m with no one being any the wiser; and South African Revenue Services (SARS) boss Tom Moyane could forever extend the fishing expedition he has conducted into former finance minister Pravin Gordhan.

So far, he has paid Grant Thornton R20m to study all SARS documents from 2007 to 2014. He has asked the Treasury for another R50m to get the probe to go back to 2005. Both of these required the Treasury to approve "deviations" from existing contracts. Both were declined.

This pattern of behaviour by a political elite that has become accustomed to feeding off the state is by now familiar. Not much more can be expected of Brown and Zwane. They are shameless. Thanks to Brown, Eskom now poses the largest risk to the economy. Thanks to Zwane, the mining sector in SA has been described by investors as "uninvestible".

The same is not true, though, of the Treasury. It has not yet been destroyed. It can still be saved and Gigaba has told us, the ratings agencies and the world — on his superexpensive international roadshows — that he is the man who can save it.

But will he? With each a passing day this looks less likely.

The management team of the Treasury has been sidelined. Crucial decisions – for example, to bail out South African Airways using the National Revenue Fund — are being made without its involvement. The director-general, who is the accounting officer and who is responsible for the running of the department, appears to be excluded from important "informal discussions".