What has happened to the rainbow nation? 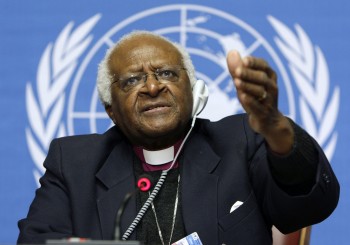 Race baiting is the default political tool of dishonourable politicians seeking short-term goals. Detailed studies by the Institute of Race Relations shows ordinary South Africans of every colour are less concerned with the issue, and believe merit should be the basis for job selection. When Julius Malema says he is not calling for whites to be slaughtered (just yet?), are we to believe whites are here under sufferance? Rex van Schalkwyk, a former judge of the Supreme Court of SA, looks at what has become of the rainbow nation and whether we should believe politicians who cry racism as the source of all evil.


What has happened to Emeritus Archbishop Desmond Tutu’s “Rainbow Nation of God”?

Julius Malema’s pronouncement that he is not calling for the whites to be “slaughtered”… not yet, speaks to an assertion that the archbishop was deluded. The persistent, and tiresome incantation of the refrain of “white racism” by ANC politicians, enthusiastically supported by much of the mainstream media, conveys the same message; so does the mantra of President Jacob Zuma and of his acolytes, of “white monopoly capital” as the imagined source of the country’s ills.

Almost entirely ignored by the selective moralists are all the innumerable examples of black racialism, with whites as the targets. There has also been a selective process of law- enforcement by the various law-enforcement agencies, one of which, The Human Rights Commission, eagerly asserted its authority against the thoughtless and hapless Penny Sparrow.

There is fault here somewhere, but where does it lie?

The ever optimistic Douglas Gibson asserts that the people get along tolerably well together, and that this, naturally, includes inter racial relationships. This might be seen as the wishful thinking of a liberal (sometime) politician, seeking to validate his own philosophy, but what does the lived experience tell us? There are innumerable anecdotal examples that tend to validate Gibson’s thesis and confound those of the anti-white rhetoricians. Practically every South African, of whatever race, has personal stories to tell of inter-racial goodwill, generosity, kindness, and simple decency.

Cynics would say that anecdotal portrayals do not take account of the broader picture and that is probably correct, so what does the available objective evidence tell us? Two sporting codes, cricket and rugby, again, much maligned for their supposed failure to have transformed, give an entirely different impression to their millions of television viewers. In both cases the comradeship between the players and within the enthusiastic supporting crowds portray a goodwill, tangible even to the TV audience.

The best source of objective evidence is probably to be found in the survey into race relations undertaken by the South African Institute of Race Relations (IRR - March 2016). A survey done by an impeccable source, these are some of its most significant findings. (The survey covered the four largest race groups, but this article will dwell only on the responses of the black respondents, as this is the group with which the ANC is principally concerned.)

The research identified the 10 most serious “unresolved problems”. In common with the other race groups the blacks, at 58.6%, identified unemployment as the most serious, next, at 26%, came crime and then, at 20.8%, housing. The last of the 10, at 4%, was drugs/gangs/warlords. Land redistribution, a cornerstone of the ANC’s programme, does not even feature.
On race relations, 59.7% of black respondents said that they had improved. A further 22.9% felt that they had stayed the same, while only 14.6% contended that they had become worse. These figures belie the assertions of the Zuma ANC as well as the repeated mantra of the EFF.

On job appointments 87.1% of the black respondents agreed that “…the best person should be given the job, regardless of race”, while 74.2% of black respondents agreed that sports teams should be selected “…only on merit and ability…” Oregan Hoskins, the former president of the South African Rugby Board once infamously proclaimed that transformation is more important than winning. More important to whom? To the broader community of the South African population, whose interests he was bound to serve? Or to the politicians of the ANC, to whom he appears to have been enslaved?
Why then is the ANC obsessed with programmes of affirmative action and sports transformation? The answer is that they have an ulterior, and dishonest, political motive. Can the motive be that they seek to ferment discontent, and racial hatred, for short-term political purposes?

Is this the process whereby radical, vociferous minorities, of which the Fees Must Fall movement is a singular example, is known to get their way? If so, it is the antithesis of democracy.
What emerges from the IRR survey, and also from the anecdotal sources, is that what the ANC politicians and Julius Malema find so compellingly important, is what the people consider to be the least significant, and what the people consider to be the most compelling is what the politicians have done the most to undermine or destroy.

Also, if land ownership is thought to be so significant, as indeed it is, provided it is the appropriate land; if a man’s home is his castle, as we have been told since time immemorial, then why has the ANC, in 22 years in government, not done anything of its own volition to transfer the millions of township properties, effectively under ANC control, to the ownership of their millions of black occupiers? (An eminent example has been set by the Free Market Foundation’s Khaya Lam project.) Instead, it proposes to undermine, and in many cases, effectively to destroy commercial agriculture, in its quest to transfer agricultural land to identified but disinterested beneficiaries.

Why all this perversity, and can it be stopped?

The first question is beyond the scope of this article but there is, fortunately, a positive answer to the second. The political irrationality, undertaken for whatever reason, can be stopped by the law, but only by the proper observance and, if necessary, enforcement, of the law.

It is the rule of law that stands between the aspirations and welfare of the South African people and their destruction by avaricious and dishonourable politicians.

All of the ANC’s radical programmes for the “reform” of the economy, of which much has been said recently, will occur, if they are to occur according to the tenor of the political messages conveyed, in violation of the constitution and of the rule of law.

Land for which the sale price has not been freely negotiated might, in certain circumstances, be expropriated, but then only at a market-related price and not, as the ANC proposes, at a price determined by a state functionary, effectively serving the interests of the government. Moreover, any legislative prohibition of the right of appeal against a determination made on valuation by a state functionary would itself be unlawful.

If the ANC refuses to take lessons from all the available empirical evidence of what works, what does not work, and what the majority of the people would want to see done, then the recourse to the law is inevitable. It is the discipline to which an obdurate and uncaring government must ultimately be compelled to yield if the vision of the gentle prelate is ever to be realised.