Is it constitutional to make hate speech an offence? 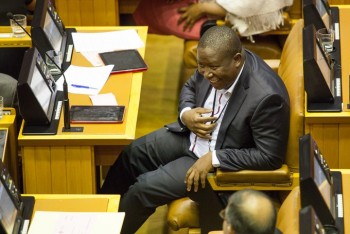 Do we need a hate crimes bill to stamp out racism, sexism and other forms of unacceptable speech? As some legal commentators have already pointed out, laws already exist to stamp out hate speech, and incitement to violence is already a crime. Why do we need this new legislation? And will the government apply it equally, in which case several members of parliament, including the EFF's Julius Malema, would now be in jail? Safura Abdool Karim at Groundup argues the case.

The controversial Prevention and Combating of Hate Crimes and Hate Speech Bill was tabled for comment last year and the public has until the end of the month to comment.

The Bill does three key things: (1) creates the offence of a hate crime, (2) criminalises hate speech and (3) places a duty on government to prevent and combat these offences through education and other efforts.

The most controversial of these is the criminalisation of hate speech. This offence will attract a sentence of up to three years in prison on first conviction and up to ten years for subsequent convictions.

Opinion is divided on the Bill (compare this by Pierre de Vos vs this by Ernst Roets, or this by Jacques Rousseau). Also a contingent of religious leaders has opposed the Bill. An organisation called Freedom of Religion South Africa has a petition calling for the deadline for comment to be extended, and requesting the insertion of a religious exemption. These religious groups want the bill to exempt preaching against homosexuality.

Hate Speech and the Constitution

The right to freedom of expression is enshrined in section 16 of the Constitution and it is the only right which contains an internal limitation. This means that the text of the right itself excludes certain kinds of speech from constitutional protection. In the Constitution, there are three categories of speech that are not protected; propaganda for war, incitement to imminent violence and what we call hate speech.

Section 16(2) excludes “advocacy of hatred that is based on race, ethnicity, gender or religion, and constitutes incitement to cause harm” (emphasis added) from constitutional protection. In order for an expression to be considered hate speech unprotected by the Constitution, it needs to both advocate hatred and incite violence.

An example would be Julius Malema singing ‘shoot the boer’ which is both advocacy of hatred and also incites harm against a group of people. The Johannesburg Equality Court, in 2011, found that it is not protected by the Constitution. However, a statement such as ‘Women are evil’ does not incite violence (not directly anyway) and is therefore almost certainly protected by the Constitution.

In the Bill speech is a crime if it is hateful, insulting, threatening or abusive and incites harm, violence, contempt or ridicule, on the basis of race, gender, sex, sexual orientation, intersex, religion, belief, culture, language, birth, disability, HIV status, nationality, gender identity, albinism or occupation or trade.

Note that speech doesn’t necessarily have to incite harm to be a crime under the Bill. It is sufficient for it to incite contempt or ridicule. So both the above examples (“Kill the Boer” and “Women are evil”) might be criminal under the Bill, the latter because it incites contempt for women even though it doesn’t incite harm (not directly anyway).

Another issue with the Bill is that it includes categories that are not listed in the Constitution such as, HIV status, nationality, and intersex people.

“Freedom of expression, especially when gauged in conjunction with its accompanying fundamental freedoms, is of the utmost importance in the kind of open and democratic society the Constitution has set as our aspirational norm. Having regard to our recent past of thought control, censorship and enforced conformity to governmental theories, freedom of expression — the free and open exchange of ideas — is no less important than it is in the United States of America. It could actually be contended with much force that the public interest in the open marketplace of ideas is all the more important to us in this country because our democracy is not yet firmly established and must feel its way. Therefore we should be particularly astute to outlaw any form of thought-control, however respectably dressed.”

You can comment on the Bill by emailing hatecrimes@justice.gov.za before 31 January 2017.