Unemployment is a national emergency - just let them work 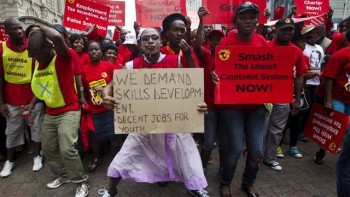 Half of South Africans between the ages of 18 and 24 are unemployed, not because they do not want to work, but because of labour laws that protect the employed aristocracy and actively discourage companies from hiring anybody new. Eustace Davie, director of the Free Market Foundation, offers a simple and inexpensive way of overcoming this barrier so that the country's youth can get a real taste of employment.
Exempt unemployed people from restrictive labour laws and allow them to enter into employment contracts with anyone they choose, on any conditions they choose, and at any wage they find acceptable. This is the simplest, quickest and least costly way to allow thousands upon thousands of the unemployed to find themselves jobs. Unemployment is a national emergency that must be addressed with the utmost urgency. Just Let Them Work!

In February 2011 the National Treasury issued a discussion paper for public comment titled Confronting youth unemployment: policy options for South Africa. The paper resulted in the implementation of the youth employment subsidy. The conclusion of the discussion paper contained this dire warning:

Within this bleak situation the problem of youth unemployment is acute, half of all 18 to 24 year olds are unemployed and their prospects of finding a job are much lower than for the older unemployed. Without experience, young people have little chance of becoming employed. This is an economic problem and a waste of potentially productive resources. Moreover, unemployment contributes to poverty, crime, violence, political disengagement and the weakening of social cohesion.

This paper was published 8 years ago and half of all 18 to 24 year olds are still unemployed. In total, more than one-third of the potential labour force is unemployed and the situation is not improving.

It is not an unwillingness to work that is keeping almost 8.2 million people unemployed in SA. It is the artificial but real legal barriers to entry into the job market. The option to “find themselves jobs” is the critical factor. Imagine the difference if, when the unemployed go knocking on the doors of potentially receptive employers who are prepared to listen, the jobless have been exempted from the legislative and regulatory barriers that motivate the “no jobs” signs

The unemployed could be empowered by giving anyone who has been unemployed for six months or more, on application, a “Job Seekers Exemption Certificate (JSEC)”, valid for (say) 2 years, that entitles them to enter into written employment contracts on any terms that are acceptable to them. With such certificates in their possession, JSEC holders could bargain with employers and strike the best job deals they can find. For two years they would be free agents to move around, if they wish, from job to job until they find the one that suits them best. After two years of freedom of contract, most should be solidly settled into regular jobs with all the protections of the LRA.

All that is necessary is to set the unemployed free from the shackles of the labour laws and allow them the freedom to decide for themselves what employment conditions are acceptable to them. It is time to respond to the call Just Let Me Work!

Applications for exemption certificates must be entirely voluntary. Anyone who does not want to bargain with employers need not apply. Municipalities could handle the application and issue of JSECs to make them easily accessible everywhere.

A written contract between employer and JSEC holder would be obligatory and employers could be asked by labour inspectors to produce a copy of the contract together with a certified copy of the exemption certificate for verification of the legality of the employment agreement. Small firms would be the most likely employers of the holders of JSECs.

If government is wary of the consequences of implementing the concept, it could test it in a trial area first, perhaps in a rural municipal area with a mix of activities and a high level of poverty and unemployment. Perhaps a municipal council that is struggling with high unemployment will come forward to offer to do the trial implementation.

Our current strict labour laws give a high level of job security to workers who already have jobs, but also deprive a large percentage of the currently unemployed people of jobs, in fact, of ever getting jobs.

Legislated restrictions on termination of employment contracts, (dismissal provisions) and compulsory minimum wages without doubt represent the most formidable barriers to employment. The average job applicant is unaware of these laws lurking in the background. That potential employers, especially small employers, are terrified of making mistakes that could land them in the CCMA or being stuck with an employee that does not fit into the organisation.

Young school leavers can no longer plead with an employer, as they did in pre-Labour Relations Act (LRA) days, “Please just give me a chance and I will show you what I can do, I will work hard, and if you are not happy with my work, just tell me, and I will leave! Just let me work!” How 8.2 million jobless people must wish that they were allowed to make such decisions about their own lives, that they had the freedom of contract that pre-dated the LRA, especially the 1.5 million jobless who are 15 to 24 years old and mired in the hopelessness of unemployment.

The JSEC proposal provides an option for government to give freedom of contract to the unemployed while keeping the existing laws in place for the protection of the already-employed. In many countries, small businesses with less than a certain number of employees are exempted from aspects of the labour laws. This is done because they are generally the main source of first-time jobs for inexperienced workers. However, SA labour unions are opposed to what they call a “two-tier” labour market.

Exempting the long-term unemployed and not the employer from aspects of the labour laws is an option that has, to my knowledge, never been implemented anywhere. Given the mass unemployment in South Africa it is time to try something bold, new and simple: let the unemployed make their own decisions about their own working lives. Give them a chance. Just Let Them Work!