The land of no consequences for those in high office 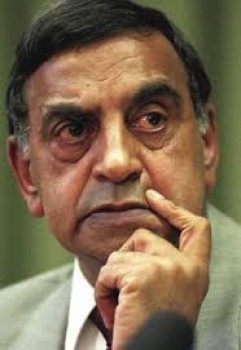 In this article, Rex van Schalkwyk, a former Supreme Court judge, points out several instances where senior politicians and government officials stomped all over the Constitution, not to mention common law standards of fraud, and got away with it. Instead of being held to the same standard as the rest of us, they abusers were sheltered by their political bretheren. This article first appeared in Business Day.


In March 1997, Minister of Justice, Dullah Omar (pictured), was an eager participant at a welcoming party at the Cape Town International Airport for the returning fraudster and eminent ANC activist, Alan Boesak. Omar who subsequently rebuked Western Cape Attorney-General, Frank Kahn SC, for his decision to prosecute Boesak even proposed a defence; Boesak, he claimed, had merely participated in “struggle bookkeeping”.

Ignorant, apparently, of the doctrine of the separation of powers, Omar also berated Kahn for not first having consulted with him, the president, the deputy president or the cabinet about the proposed prosecution. From this evidence, he was conspicuously unsuited to his role as minister of justice.

At about the same time, deputy speaker of parliament, Baleka Mbete, was said to have acquired a fraudulent driver’s licence. One of the many curious aspects of the case was that the date on the driver’s licence pre-dated the date of the supposed driver’s test; another was that, as a “sign of respect”, the person said to have done the test, one Henry Brazier, then on sick leave and not a registered testing official, had undertaken a 350 km trip from Nelspruit to Delmas to fulfil this task.

When confronted, the deputy speaker was unrepentant: she was a very busy person with children “all over the country”, a parliamentary job in Cape Town and a constituency in Kwa-Zulu Natal; she did not have time, she said, to stand in queues.

Winnie Madikizela-Mandela was indignant about the public outcry caused by this scandal. “Since when,” she wanted to know, “is a fake driver’s licence a front page story?”

Minister of Health, Nkosozana Dlamini-Zuma could see no fault with her decision to have made an unauthorised donation of R14 million to fund an AIDS awareness play, the abortive Sarafina II. A parliamentary committee was set up to examine the accountability of officials for the manner in which public funds were employed. Instead of accounting to the committee, the minister lectured the docile participants on the severity of the scourge of AIDS, and was subsequently exonerated when an anonymous donor stepped into the breech.

Omar remained minister of justice until he was appointed minister of transport in 1999, following the election of Thabo Mbeki as president. He died while still in office, in March 2004.

Baleka Mbete is now the speaker of the National Assembly and national chairperson of the ANC. She was also a prominent beneficiary of a multi-million rand black empowerment scheme devised by Nic Holland, the chief executive of Gold Fields Limited. This had become necessary, so the bemused shareholders were told, to ensure licensing approval for the potentially lucrative South Deep Mine; a venture upon which Gold Fields had already expended several billion rand.

Nkosazana Dlamini-Zuma, in the meantime, has become the president of the African Union and is now regarded, by some, as the heir-apparent to the office of Jacob Zuma, her former husband.

These are only a few of the many examples of those public servants and other state functionaries who have come to view service to the South African democracy as an immunity from adverse consequences.

The multitudinous others, mostly from provincial and local government, the high officialdom and the innumerable state owned enterprises, came to rely upon the refrain: innocent until proven guilty. In so doing, they promoted the idea, now commonly-held, that fitness for public office depended principally upon an unblemished criminal record; or, if blemished, that the blemishes should be of a lesser kind. The idea that fitness for public office should demand qualities of exceptional character and ability never having been a determining criterion.

This aberrant sense of accountability has persevered to the present. Under the baleful Zuma presidency, the idea that public officials are accountable to the electorate, or even to the law, is regarded as an irritant, to be indulged when unavoidable, and to be avoided in every other circumstance.

From the land of another-day-another-scandal, comes another scandal, involving this time, Minister of Defence and Military Veterans, Nosiviwe Mapisa-Nqakula. Using a state aircraft and fake travel documents, she smuggled a Burundian woman, Michelle Wege (allegedly the victim of abuse), from the Democratic Republic of the Congo into South Africa. Ms Wege’s father, who is alleged to have been implicated in the abuse, has strenuously denied the charges. It has also since emerged that, previously, Ms Wege had been romantically involved with the minister’s now deceased son.

In this case, the minister committed various offences under the Immigration Act. Inevitably, her use of a military aircraft for private purposes would also constitute a separate set of offences, and, in addition, common law offences of fraud would have been committed.

In her defence, the minister issued a statement that she was moved by the spirit of Ubuntu to act in this charitable manner. The ANC Women’s League voiced approval of this unlawful conduct and abuse of state resources, saying it was shocked at the insensitive reports about the matter. The message is clear: if a government official claims to have acted in the spirit of Ubuntu, the law becomes irrelevant… but only, it appears, if one occupies high office.

Like President Zuma before her, the minister now insists that the facts be subjected to an “impartial and fair process”. The question, however, is whether that process is to be guided by the law (as required by the Constitution, to which the minister has sworn allegiance) or by the spirit of Ubuntu?