Infrastructure spending to reach R847bn over next three years

Category Budget
Finance minister Pravin Gordhan announced that public infrastructure investment will reach R847 billion over the next three years, with signature projects such as Medupi power station, new rolling stock for Metrorail, and a nearly 50% increase in social infrastructure spending over the next two years.

Medupi power station (pictured below) is expected to come on line later this year, while Transnet has increased capacity on its coal line, with further expansion of the coal, manganese and iron ore lines planned. 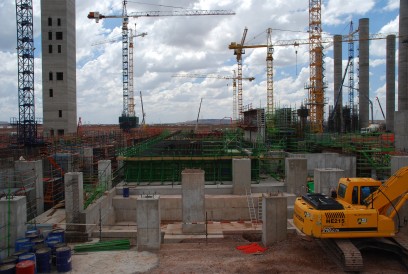 Other key projects in the pipeline include:

• The Passenger Rail Agency of South Africa refurbished 500 metrorail coaches last year, and its new rolling stock procurement programme will get under way this year.
• Spending on social infrastructure – which includes health, education and community facilities – will increase from R30 billion in 2012/13 to R43 billion in 2016/17. Priority will be given to programmes to eradicate school infrastructure backlogs and to refurbish clinics and hospitals.
• A programme to rehabilitate 35 dams has been completed, and work is in progress on the country’s five large water transfer schemes.
• In 2014/15, a total of R40 billion in infrastructure grants will be transferred to local governments for their water, sanitation, energy and environmental functions.

The private sector is also making an increasing contribution to infrastructure investment, said Gordhan. Contracts for 47 renewable energy projects were concluded in 2012 and 2013, many of which are already under construction. These will add 2,460 MW of power capacity, and investment of R70 billion. A further R45 billion in investment will be contracted this year.

"Our development plans also focus on overcoming the spatial fragmentation of South Africa’s built environment, improved public transport and accelerated investment in human settlements.
An integrated city development grant has been introduced to strengthen long-term city planning and encourage private investment in urban development. It will amount to R814 million over the medium term," according to Gordhan.

Over the next three years, national government will allocate R105 billion to municipalities for free basic water, sanitation, electricity and refuse removal services.

In rural districts, development initiatives are gaining momentum and water supply and sanitation programmes are in progress. R3.9 billion has been allocated to capacity building programmes over the medium term, targeted at small towns and rural municipalities. Special initiatives include: