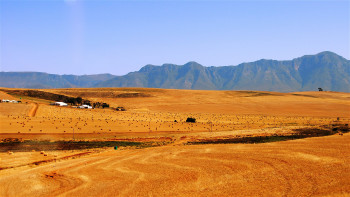 The EFF’s attempt to amend the Constitution to allow for expropriation of land without compensation – with the support of the ANC – is a direct attack on the most fundamental rights enjoyed by all South Africans. If they can take away your land without compensation, they can take anything they want. Chris Hattingh of the Free Market Foundation looks at what’s going on.


We take for granted the rights for which many fought and died. We also seem to be taking lightly the serious threats that are being made to our freedoms. The most serious being the move by the Economic Freedom Fighters (EFF) and African National Congress (ANC) to amend section 25 of the Constitution to allow for expropriation without compensation because such an action will undo the right which underpins all other freedoms we enjoy. Without property rights no other human rights are possible.

The Bill of Rights contained in the constitution is the cornerstone of our constitutional democracy. As long as they are not tampered with, those rights under threat are protected by the Constitution. All human rights are premised on the right of each and every individual to be protected in his own person and property. Property rights do not flow from other rights; they are the prerequisite for every other right. Without the right to own and be secure in one’s property, other rights are inhibited and only ‘granted’ when the state allows it. If we believe that each person has the right to liberty and self-ownership, we must protect the prerequisite right: the right to private property.

Property is inseparable from liberty. Liberty as a concept has no substantial meaning or use if we have no right to our possessions, or if we are only ‘free’ insofar as the state will allow us to be. A constitution is the barrier that protects our rights from violation by the state and others; it must not be seen or used as a tool to grow the reach of the state into our lives. The proposed amendment to the Constitution will remove a vital barrier to tyranny in our country.

If we are all tenants of the state, the concept of ownership will mean nothing under law and nobody will have anything to lose. If we only have leases which can be ignored at any time and do not own the land upon which our houses, flats, factories or industries stand, we won’t truly own those things in the first place.

The ANC, in moving to the left of the political spectrum to where the EFF sits, has shown its willingness to jettison the hard-fought gains of democracy to secure its continued existence as the ruling party of the country. Instead of working within the freedom-protecting, democracy-promoting limits of the Constitution, instead of implementing reforms which would liberalise the onerous laws on potential workers and grow the economy, instead of doing the hard work, the EFF and ANC are counting on finding an easy way to get votes, even if it means destroying the country.

The economy cannot grow without secure property rights. Besides land, property rights include things such as your car, your home, your books, and your computer. Do not be fooled by the words of politicians who just want to score a quick vote before next year’s elections. Property is not confined to only big, white-owned agricultural tracts of land. If we open the door and allow the state to step in and start deciding what property it want to take, for whatever purpose, its greed will grow and it will start abusing that power. A history lesson we should all be only too aware of after so many years spent fighting the negation of rights practised by the apartheid regime.