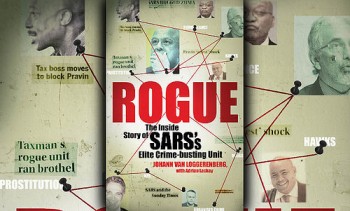 The capture of the state by the Guptas and others is an ever-present danger in SA. A new book called Rogue: The inside story of SARS's elite crime busting unit details the extent to which dark forces have taken over key pillars of the state apparatus. Ryk van Niekerk reports the story in Moneyweb.

South African business leaders are not doing themselves or their country any favours by remaining silent about recent political developments.

Although there have been a few business leaders who have voiced their concerns in public in recent weeks, we need more voices. We need more leaders to ditch the seemingly omnipresent practice of brown-nosing and stand up to publicly condemn the brutal attack on State agencies and the inevitable economic consequences.

I urge all business leaders to read ‘Rogue: The Inside Story of Sars’s Elite Crime-busting Unit’, written by Johann van Loggerenberg and Adrian Lackay.

The authors also claim that the (very effective) attack on Sars by other organs of the State has its roots in Sars’ investigation into tobacco smuggling and the involvement of politically-connected individuals in this. The book helps the reader to connect the dots in this regard. The only agency that seems to have remained independent is the National Treasury and under the circumstances it is naïve to think that it will remain standing while all other agencies have been captured.

The attack will only intensify.

However, all is not lost.

Business leaders have the power to change history. They demonstrated this ability in December last year when Nhlanhla Nene was fired as finance minister. During the days that followed dozens of senior business leaders and banking CEOs, together with a few senior ANC leaders, reacted so decisively that President Jacob Zuma blinked and Pravin Gordhan was reappointed as a concession.

This event also led to the creation of the much-mooted CEO Initiative through which our top business leaders fought side by side with Gordhan to stave off a ratings downgrade. They were successful in round one.

Round two is upon us, but unfortunately it seems as if the initial enthusiasm is waning.

Two CEOs recently remarked over a few drinks that although they still support the initiative, it is clear that government is not as eager to put action to words as the CEOs are.

The only successful project flowing from the CEO Initiative so far is the recently-announced R1.5 billion SME fund. It is a beginning, but a will not provide the spark for accelerated economic growth. (The new SAA board was selected with the help of the CEO initiative too).

On the contrary, we need aggressive action to address the structural problems of the economy. We need the removal of policy uncertainty, drastic steps to fix State-owned enterprises, aggressive steps to reduce government corruption, deep cuts to the public wage bill and increased accountability of senior officials. Or at the very least, the actual implementation of the National Development Plan, especially the chapters on labour law reform.

In this context a new SME fund is not going to make any difference. It is merely CEOs putting cash on the table to which only around 50% of the participating companies actually contributed.

A ratings downgrade is collateral damage

But back to Van Loggerenberg and Lackay’s account of the war within State agencies. A blitzkrieg is probably a better description for the events leading up to December last year. It was only Nenegate and the emergence of Gordhan that managed to dent the advance.

But Nenegate was only one battle and the war is most definitely still raging. Business leaders must therefore continue the fight with the same vigour as in December last year.

We need more voices. Many more. Sipho Pityana, Neal Froneman and Johann Rupert are lone voices in the wilderness. The voices should also address more than a potential ratings downgrade.

The nature and coordinated nature of the attacks on State agencies such as Sars make any ‘unified’ attempt by Treasury and the CEOs relatively inconsequential, especially in the long-term. It is akin to the Hansie-era of South African cricket where one or two Proteas would play their hearts out to win a game for their country… but the fate of the game had been decided by the captain.

I found the closing remarks by President Zuma at the launch of the R1.5 billion SME fund very revealing and ironic: “The meeting [of the Presidential CEO Initiative] appeals to all in our country to refrain from making public utterances that promote a negative narrative about the country which undermine our collective drive to reignite economic growth and jeopardise job creation.” (my emphasis)

This is why we need every voice possible to stand up and put pressure on our political leadership – as we did in December last year.

Tony Leon, former leader of the Democratic Alliance, made a similar plea in an excellent article published in the Sunday Times on September 25. He was however not too optimistic that the business community will heed the call. He wrote: “But don’t hold your breath on business being bold.  While civil society, the political opposition, the media and now the courts have found their voices and postures to counter the misgovernance which is capsizing the ship of State, this does not hold for organised business. It either goes along to get along or simply cannot define its position in the public space,” he wrote.

He needs to be proven wrong.