Category Media
SA's press is becoming more lapdog than bulldog. The SABC wants 70% "happy, patriotic" news and the government is using its financial clout to muscle in on other areas of the media, as this article from The Economist makes clear. 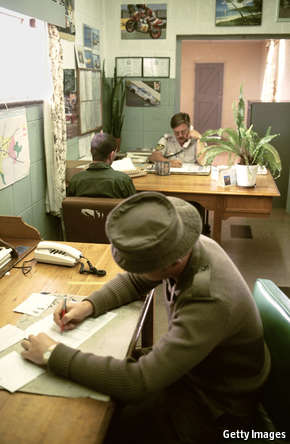 Apartheid's enforcers (see left) had simple ways of muzzling critical newspapers during South Africa’s dark period of white rule: they blatantly censored them or closed them down. Since the end of minority rule in 1994, the country has been blessed with vibrant and muckraking media, protected by a constitution that guarantees freedom of expression. South African newspapers have dug up dirt on crooked arms deals, exposed scandals such as lavish state spending on the private home of Jacob Zuma, the president, and generally held the mighty to account.

An infuriated African National Congress (ANC), which has ruled South Africa for a little over 20 years, has considered, but so far rejected, heavy-handed ways of curbing this boisterous exercise of free speech. These include a “secrecy bill” that threatens to jail journalists or whistle-blowers who leak or publish state secrets.

For now the ANC has relied on more subtle methods of silencing journalists. These include wheezes such as installing a radio-jammer in the parliament building that, for a few hours earlier this year, prevented them from using their mobile phones to report on a controversial appearance before parliament by Mr Zuma in which members of opposition parties were forcibly ejected from the house. Another cunning ploy, earlier this month, was to move an embarrassing meeting of a parliamentary committee to a nearby office building. Security guards were ordered to keep the press out.

Amusing as such shenanigans may seem, they underscore far wider-ranging moves to gag or co-opt the media. The state-owned South African Broadcasting Corporation (SABC) is legally bound to offer unbiased news, but has become little more than a mouthpiece for the ruling party. Recently the main opposition party, the Democratic Alliance, was forced to take the SABC to court when it refused to cover the party’s congress. The SABC’s cameras were determinedly pointed away from the action in February when armed police entered parliament to eject opposition hecklers by force. A senior manager at the SABC has reportedly demanded a 70% “happy news” quota.

President Zuma has urged all media to be more “patriotic”. And his government uses taxpayers’ money to bolster private media that sing the ruling party’s praises. Its spending on advertising in newspapers and magazines, for example, is openly channelled towards friendly titles such as New Age, which is owned by a family that is close to the president.

It also meddles with who owns papers and who works for them. A favourite buzzword of the government is “transformation”. Although the senior ranks of news organisations are relatively white and male, the government’s view of how they should be transformed is not that they should simply appoint more women and black people. It wants media firms that are run by ANC loyalists. Faith Muthambi, a communications minister with poor communication skills, says that her department will “investigate the possibility of pooling government media assets with a view to support the creation of a black-owned media house in the country”.

Similar moves are already afoot under the auspices of other government departments. One enthusiastic investor in media assets is the government’s pension fund. Two years ago it helped finance the purchase of Independent Newspapers, one of South Africa’s main newspaper groups, by a company led by Iqbal Surve, a businessman with strong ties to the ANC and a former doctor to Nelson Mandela.

Since the takeover readers of the Independent’s once-feisty titles, which include the Cape Times and the Star, have seen a distinct change in coverage. Besides displaying an odd predilection for puff pieces about Dr Surve it has become markedly less critical of the government. Dozens of senior journalists and editors have left or been sacked. The group’s executive editor, Karima Brown, was recently pictured at an ANC anniversary rally dressed in an ANC hat. With editors and owners like these, who needs censorship?