You say you want a revolution? Here's a taste of what's in store

Category Economy
If you want to stop being victimised by financial terrorists, stop using their currencies, says Charles Hugh-Smith. History is not on the side of the financial aristoracy who, like their Roman forbearers, are destined for wipe-out within the next 10 years. 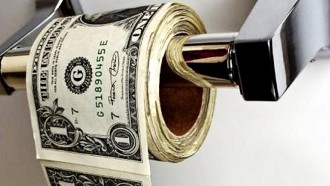 The only way to reverse rising inequality and break the power of the super-wealthy Financial Aristocracy is to stop using their central-bank issued currencies, according to Charles Hugh-Smith at Zero Hedge.

Many well-meaning people want to limit the wealth and power of the super-wealthy, i.e. the Financial Aristocracy/Oligarchy. (For more on the modern class structure, please see America's Nine Classes: The New Class Hierarchy).

Reformers have suggested everything from a global tax on wealth (Thomas Piketty) to publicly-owned banks to limiting the pay-to-play circus of campaign contributions.

None of these will change the power structure or limit the super-wealthy. as I explained last week, If We Don't Change the Way Money Is Created and Distributed, We Change Nothing. The super-wealthy will either move their capital elsewhere, derail the reforms, or have their political lackeys water the reforms down to the point they are nothing but a politically useful illusion of "change."

Central states borrow some of this money to fund their bread and circuses welfare programs that keep the restive underclasses distracted, insecure and dependent on the state, but none of this actually changes the ownership or capital structure of the economy; it just makes the masses complicit in the status quo.

Though the vast majority of us have little opportunity to use money that isn't issued by central banks, that's changing. Bitcoin is the most well-known example of a non-state, non-central bank form of global money, but there are many more in use or in development.

The state/central bank monopoly on issuing and distributing money is (along with war-making and coercion) the state's most jealously guarded monopoly. The state-- which includes the largely invisible Deep State, the central bank (Federal Reserve) and the visible machinery of government--retains the sole right is issue money in whatever sums it chooses and to whom it chooses because the jig is up if the state loses the power to reward its Financial Aristocracy cronies and fund its own programs.

In a nation that uses competing global non-state currencies, the state must live off tax revenues and bonds sold in the open market, free of central bank collusion.

In a nation that uses competing global non-state currencies, the central bank loses the power to enrich the super-wealthy.

Isn't it obvious that whomever controls the digital "printing press" of new money controls everything? Conversely, if this power is stripped away from centralized states and their banks and decentralized (as I outline in my new book A Radically Beneficial World: Automation, Technology and Creating Jobs for All), the essential mechanism of transferring wealth to the super-wealthy and their political lapdogs (Clintons et al.) is broken.

States will naturally suppress competing currencies and outlaw any threat to their monopoly. That bitcoin is not yet illegal in the U.S. is a surprise. What isn't a surprise is that Goldman Sachs has sought patents on its own crypto-currency: Goldman Sachs wants to create its own version of bitcoin. (via Drew S.)

Those who believe states can never lose control of their currency should consider what happens in hyper-inflation. When states debauch their currencies and push them over the cliff, people abandon the currency in favor of money that holds its value and acts as a means of exchange.

In such a setting, a non-state digital crypto-currency currency is a practical solution. Gold and silver are always money, but they have their own risks and limitations ("my lead will take your gold" etc.). When official money loses its purchasing power, even phone-card minutes can act as money.

As farfetched as it may sound today, I suspect there will be a ruthlessly Darwinian sorting of currencies within the next 10 years. Nations with broken national currencies that adopt non-state competing currencies will outperform nations that cling to centralized enrich-the-already-super-wealthy model of central bank-issued currencies.

The only way to reverse rising inequality and break the power of the super-wealthy Financial Aristocracy is to stop using their central-bank issued national currencies. When the world ceases to use the Financial Aristocracy's money, their power to accumulate more wealth at the expense of everyone else will disappear.

Everyone who is convinced that the current status quo is permanent and unbreakable should consider what happened to the super-wealthy private landholders of the Western Roman Empire. When the empire's power to coerce broke down, the super-wealthy vanished into the dustbin of history.

Few believed that possible in 475 AD, but history isn't a matter of belief. Believing it isn't possible doesn't stop history.